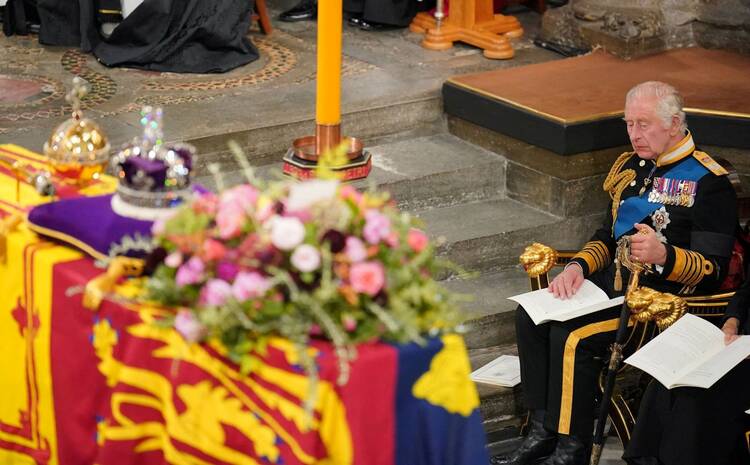 King Charles III sits in front of the coffin of his mother, Queen Elizabeth II, during her state funeral at Westminster Abbey in London Sept. 19, 2022. (CNS photo/Dominic Lipinski, pool via Reuters)

LONDON (CNS) — An English cardinal took part in the funeral of Queen Elizabeth II in an indication of openness of the British Royal family to ecumenical and interfaith dialogue.

Some observers believe the involvement of Cardinal Vincent Nichols of Westminster represents the first time for possibly hundreds of years that a cardinal or Catholic bishop has taken a role in a royal funeral.

Cardinal Nichols, president of the Bishops’ Conference of England and Wales, was one of a number of non-Anglican Christian leaders asked to lead the congregation in prayers for the queen during the Sept. 19 state funeral in Westminster Abbey.

The cardinal expressed thanks for the monarch’s “commitment to the Commonwealth throughout her reign” and prayed for a “spirit of mutual honor and respect” and that figures in authority “may promote justice and the common good.”

Among prominent Catholics in attendance were Archbishop Leo Cushley of St. Andrews and Edinburgh, representing the Catholics of Scotland; Archbishop Mark O’Toole of Cardiff, the most senior Catholic leader in Wales; and Archbishop Paul Gallagher, the Vatican’s Liverpool-born foreign minister, representing Pope Francis.

The cardinal expressed thanks for the monarch’s “commitment to the Commonwealth throughout her reign” and prayed for a “spirit of mutual honor and respect.”

Gavin Ashenden, a former Anglican royal chaplain to Queen Elizabeth who became a Catholic in 2019, said no Catholic leaders were involved in the funeral of the King George VI, the queen’s father, in 1952.

He said that, for him, “seeing Cardinal Nichols standing by the high altar dressed as a cardinal during the queen’s funeral service gave birth to a complex mixture of emotions, amongst which joy and nostalgia were combined.”

The last British Catholic monarch was King James II, who died in France in 1701 after he was deposed in a coup in 1688.

Since the 18th century, all British monarchs have been obliged, under oath, to be Anglicans and to discharge the office of the supreme governor of the Church of England.

Since the 18th century, all British monarchs have been obliged, under oath, to be Anglicans and to discharge the office of the supreme governor of the Church of England.

Queen Elizabeth and her husband, Prince Philip, were interested in ecumenism and welcomed St. John Paul II and Pope Benedict XVI to the U.K.

On Sept. 16, during a reception for religious leaders at Buckingham Palace, King Charles III signaled he would continue to pursue dialogue.

He said he recognized his “duty to protect the diversity of our country, including by protecting the space for faith itself and its practice through the religions, cultures, traditions and beliefs to which our hearts and minds direct us as individuals.”

The king said: “The beliefs that flourish in, and contribute to, our richly diverse society differ. They, and our society, can only thrive through a clear collective commitment to those vital principles of freedom of conscience, generosity of spirit and care for others which are, to me, the essence of our nationhood.

“I am determined, as king, to preserve and promote those principles across all communities, and for all beliefs, with all my heart.”

“I am determined, as king, to preserve and promote those principles across all communities, and for all beliefs, with all my heart,” he said.

Commentators are predicting that the coronation of Charles in 2023 is likely to include members of non-Anglican churches and possibly other faiths for the first time.

The funeral of Queen Elizabeth, 96, who died Sept. 8 after a 70-year reign, brings to a close 11 days of official mourning in the U.K.

Her coffin, draped in the royal standard and bearing her crown, was drawn on a gun carriage by Royal Navy sailors the short distance from Westminster Hall to Westminster Abbey for a service in the presence of 2,000 guests, including U.S. President Joe Biden, Canadian Prime Minister Justin Trudeau and other political leaders.

After the service the coffin was driven to Windsor Castle, where the queen was interred in St. George’s Chapel.