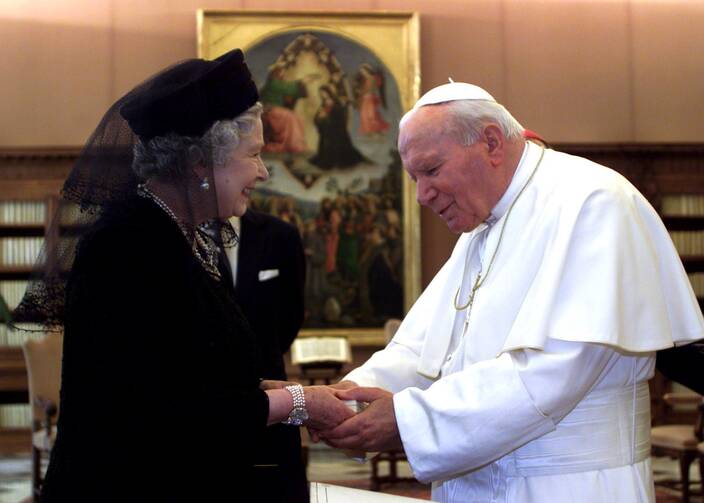 Pope John Paul II smiles as he greets Britain's Queen Elizabeth II during their private audience at the Vatican Oct. 17, 2000. Queen Elizabeth died Sept. 8, 2022, at the age of 96. (CNS photo/Reuters)

Queen Elizabeth II died last week, Sept. 8, after 70 years on the throne. She was 96 and was England’s longest-reigning monarch. And while most people, when asked to describe the relationship between the papacy and the British monarchy, would likely think of the Henry VIII affair, in reality the relationship between the two heads-of-state-slash-heads-of-churches is quite cordial.

On “Inside the Vatican” this week, host Colleen Dulle and veteran Vatican correspondent Gerard O’Connell discuss Queen Elizabeth II’s relationship with the five popes she met as queen, her role as a religious leader, and what we can expect in terms of Vatican relations from the reign of King Charles III.

Up next, Pope Francis traveled to Kazakhstan this week for an international congress of the leaders of world and traditional religions—that is, the world’s major religions and some that have a more regionally-specific history, like Indigenous religions. The pope is expected to use his speech at the congress and his meetings with other religious leaders to make the case for peace, a poignant message in a nation that borders Russia.

Colleen and Gerry discuss the political buzz around the visit, as well as the history of the nation’s tiny Catholic minority. Gerry gives his impressions of the country from 2001, when he covered Pope John Paul II’s visit there just ten days after the September 11 attacks on the United States, and explains how Pope Francis’ message of interreligious cooperation has extended even farther than past popes’.

Finally, Gerry and Colleen look at the pope’s health: After canceling his scheduled visits to Lebanon and South Sudan, and not traveling to Ukraine as he had hoped to do, why has the pope decided to make this trip?

Queen Elizabeth turned privilege into a life of Christian service

What Catholics need to know about Kazakhstan before Pope Francis’ visit