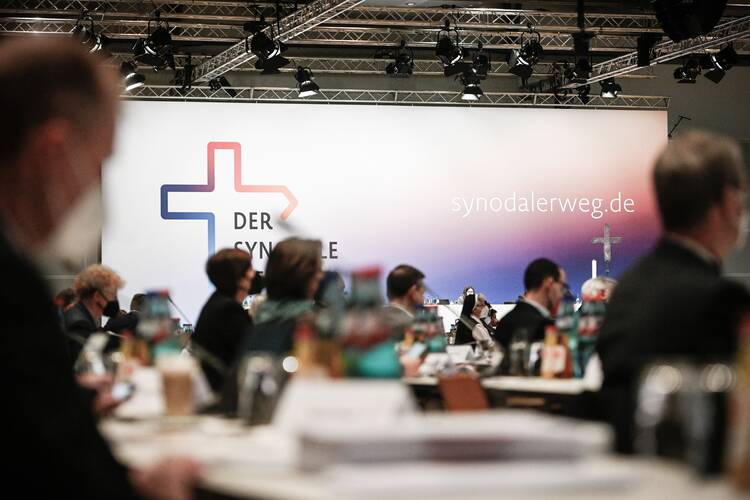 Participants attend the third Synodal Assembly in Frankfurt, Germany, Feb. 4, 2021. The German synod, like many others, faces diverse issues and has been controversial in many ways. (CNS photo/Julia Steinbrecht, KNA)

(THE CONVERSATION) There is a lot of talk about “synodality” in the Catholic church these days. Synodality refers to a process in which bishops and priests consult with lay Catholics about issues in the church.

In 2021, Pope Francis called for the “Synod on Synodality,” a worldwide discussion of issues that impact the church, which will culminate with a bishops’ meeting in Rome. A final report is scheduled for October 2023.

The Catholic Church in Germany has also moved forward with a national “synodal path” to restore trust after its own sexual abuse scandal.

As more power shifts to the global south, the church sometimes struggles to chart a path forward for all regions, each of which has its own distinct perspectives.

Church leaders around the world and in the Vatican have closely watched the German meetings. There has been sharp debate over calls by German Catholics for priests to ordain women and bless same-sex unions. These proposals have been embraced by some German church bishops, but criticized by the Vatican as well as by an international group of 74 bishops.

As a scholar of global Catholicism, I believe this controversy reflects much wider tensions within Catholicism. In 1910, two-thirds of the world’s Catholics lived in Europe. Today, just one in four do. The church’s numbers have grown most quickly in Africa and Asia. As more power shifts to the global south, the church sometimes struggles to chart a path forward for all regions, each of which has its own distinct perspectives.

The German meeting spotlights particularly difficult topics about sexuality and women’s roles, where some Catholics in Europe, North America and Australia clash with Catholics elsewhere.

The Catholic Church is often assumed to look and feel the same everywhere. But Catholicism is culturally quite diverse.

The Catholic Church is often assumed to look and feel the same everywhere. But Catholicism is culturally quite diverse.

The most public disagreement involves African Catholics and those in the United States and Europe. For example, Ghanaian Catholic bishops have criticized advocates for LGBTQ rights for imposing “their so-called values and beliefs.” Other African bishops have said they feel betrayed by liberal sentiments in European Catholicism, such as the push to allow Holy Communion for divorced church members.

Polygamy continues to be a pressing issue in some regions of Africa. While Catholic doctrine prohibits polygamy, polygamous unions are still common in many countries with significant Catholic communities.

Other African priests have emphasized that African Catholics should draw on the philosophy of “ubuntu” that affirms collective belonging to humanity.

A crucial question is how to welcome polygamous families into the church. Some African bishops have suggested that the church’s most important rites, called sacraments, should be available for at least some polygamous Catholics.

Tribalism also remains a challenge. For example, a Nigerian priest published a social media video asserting the superiority of the Igbo tribe. In rejecting such attitudes, other African priests have emphasized that African Catholics should draw on the philosophy of “ubuntu” that affirms collective belonging to humanity.

Issues in Asia, home to 12% of Catholics, are diverse.

In Japan, for example, where Catholics make up less than 1% of the population, the main dilemma is how Catholics can maintain their community identity. In the Catholic-majority Philippines, recent meetings for the Synod on Synodality have focused on how poverty and corruption impact the Catholic community and the nation as a whole.

Catholic churches in China face unresolved disputes over who has final say in the appointment of bishops—the Vatican, or the Chinese government.

In India, where 20 million Catholics live, the Dalit Catholic community is especially important. Dalit means “oppressed” or “crushed” and refers to the marginalized groups once known as India’s “untouchables.” It was only recently that a Dalit, Anthony Poola of Hyderabad, was named a cardinal, even though Dalits have long made up a majority of India’s Catholics. Caste discrimination in the church is a reality that Dalit Catholics have joined together to protest.

Meanwhile, the Catholic Church in East Timor, where Catholics are 95% of the population, has experienced its own divisive sex abuse crisis connected with a highly regarded American priest.

Catholic churches in China face unresolved disputes over who has final say in the appointment of bishops—the Vatican, or the Chinese government. Also, there are continuing issues about the status of the underground Catholic churches, which worship outside the purview of the state-sanctioned Chinese Catholic Patriotic Association.

The worldwide Synod on Synodality is focused, in Pope Francis’ words, on creating a church that “walks together on the same road.”

In parts of Oceania, climate change is an existential concern. The spread of HIV/AIDS in Papua New Guinea remains an important issue as well.

Latin America is home to almost 40% of the world’s Catholics. But the rise of Protestantism has concerned many priests and laity. Many new Protestants in Latin America believe that evangelical and Pentecostal communities are more sensitive to their needs, prompting soul-searching for Catholics.

Another crucial question in Latin America is whether to ordain married men in regions where priests are scarce, like the Amazon. The Catholic church in Latin America still struggles with its colonial past and calls to apologize for that violent history. This legacy makes it particularly important to hear the voices of Indigenous peoples.

The worldwide Synod on Synodality is focused, in Pope Francis’ words, on creating a church that “walks together on the same road.”

It would be a mistake to see this “walking together” from an exclusively Western perspective. The debate in Germany reflects how ideologically divided Catholicism has become in the Western world alone. And it is not as though churches elsewhere are simply areas of potential problems or disagreements; their faith and rich theological traditions are an important resource for Catholics worldwide.

Still, given the cultural diversity of Catholicism, there are many potential flash points as the Synod on Synodality moves forward: poverty, adapting to local culture, sexuality and gender, church governance and the continuing sexual abuse crisis—just to name a few.

This has left some commentators wondering if anything meaningful can be discussed or achieved. In my view, whether Synod conversations turn into controversies will ultimately depend on how Catholics see themselves as part of a church that is truly global.

Mathew Schmalz
Show Comments ()
Join the conversation: Login or create an account
Before you can comment, you need to update your profile to include your first and last name, as required in our comments policy. Then reload this page and you'll be set up for commenting. Update your profile