Pushed by politicians, polygamy abounds among Christians in Kenya 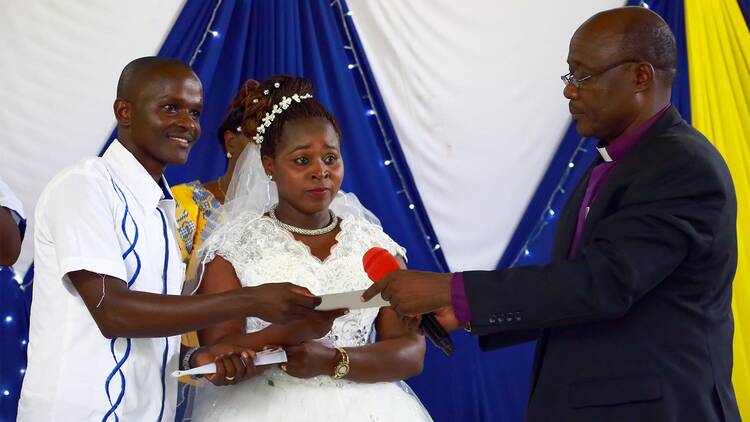 A newlywed couple poses for a photo after exchanging wedding vows on Dec. 8, 2018, in Mombasa, Kenya. RNS photo by Tonny Onyulo

NAIROBI, Kenya (RNS) — Sipping black coffee outside his house in Kibera, a slum district here, James Oketch comes up with as many reasons to support polygamy as he has wives.

“I’m proud of my big family because it’s a blessing from God. We should not take that as sin,” said Oketch, a 49-year-old carpenter, who is thrice married, with 13 children.

“There’s nowhere the Bible condemns polygamy,” offered Oketch, who attends Catholic Mass every Sunday at the Christ the King Church, despite his priest’s disapproval of the practice.

But the clincher for Oketch is that he believes polygamy is good for women. “I was very happy with the president’s action,” said Oketch, referring to President Uhuru Kenyatta, who signed a law legalizing polygamy in 2014.

“He understands our society and culture. He loves women and he doesn’t want them to remain single and snatch other women’s husbands. In fact, we should support polygamy for the sake of our women.”

Oketch is among hundreds of thousands of Christian men in this East African nation who have multiple wives despite Catholic and other church teachings. About 1.5 million Kenyans, or 10 percent of the married population, are in a polygamous marriage, according to the latest data from the Kenya Population and Housing Census.

More than 85 percent of Kenyans are Christian, while a third of the country is Catholic. Around 10 percent are Muslim.

More than 85 percent of Kenyans are Christian, while a third of the country is Catholic. Around 10 percent are Muslim.

The debate on whether men should be allowed to marry multiple wives first garnered headlines after Kenyatta signed the marriage bill four years ago. During a heated debate in the National Assembly, female lawmakers stormed out of the house in protest, saying it was an era of equal rights, gender equity and fairness. The male-dominated house enacted the bill soon after.

Some Kenyan women, however, support polygamous marriage. (The legislation does not allow women to have multiple husbands.) “I’m in a polygamous setup and I am not embarrassed about it,” said Catherine Waruguru, a member of Parliament representing Laikipia, in a recent press conference.

Some legislators even see polygamy as pro-woman insofar as it protects unmarried mothers. Early last year, Gathoni Wamuchomba, a female lawmaker from central Kenya, reintroduced a controversial proposal asking rich men to consider polygamy because most of the married men were, she said, “siring children with different women.”

Young and old men have heeded the call and openly married multiple wives.

Young and old men have heeded the call and openly married multiple wives. Last month Tom Mako, a prosperous car dealer, shocked Kenyans when he married two women, Elizabeth Simaloi and Joyce Tikoiyanon, simultaneously in a colorful traditional ceremony in southern Kenya. He was praised in the media for his courage.

“I decided to marry my two wives because I love them,” said Mako. “I didn’t want to cheat on them so I convinced them to have a joint wedding.”

The Catholic Church has condemned the practice and questioned whether the new law is constitutional.

“It’s against Christian doctrine to have more than one wife,” said Bishop Philip Anyolo, chairman of the Kenya Conference of Catholic Bishops. “It’s time that we uphold the dignity of the woman. I appeal to all Catholics and Kenyans to reject the polygamy call by our leaders who are trying to find solutions by suggesting alternative forms of family.”

Other denominations have also opposed polygamy, saying it contributes to poverty as men divide their few resources among larger families.

Other denominations have also opposed polygamy, saying it contributes to poverty as men divide their few resources among larger families.

“We cannot advocate for polygamy because it’s un-Christian,” said Bishop Paul Korir of the Anglican Church of Kenya. “It also overburdens families. Our leaders should understand the economic problems the families are going through at the time and stop spreading evil.”

Gethrude Nekesa, a teacher, said she supported polygamy but appealed to men who are planning to get second wives to first seek consent from their first wives, as women are often unaware they are sharing a husband.

“I support it,” said Nekesa, 35. “But for the sake of peace, a man should first seek consent from his wife before he takes the second one.”

Oketch, husband of three wives, disagreed. He said he didn’t consult any of his wives before marrying another one.

“There’s nowhere in the Bible where King Solomon and King David consulted anybody to marry a second wife,” he said. “I think we should be good Christians who follow and understand the Bible.”

How do we know these idiot Kenyan men are not Christians? Because they are polygamist! that is how Einstein! You can not enslave people and take advantage of poverty stricken women and consider yourself Christian. That is equal to telling God you will never murder again while in the process of knifing someone to death. It is polygamy or salvation - not both - just one. Jesus says of marriage "and the TWO become ONE" BEING - Just TWO! No more.

Perhaps the answers is we rich American Women should go to Kenya and purchase 10 or 20 husbands for ourselves in order to free them from poverty! Of course - it is all about helping our 40 to 50 husbands and nothing about our lusts or the abuse of those already in an oppressive situation. We actually would be helping these many men become free from the the constraints of their singleness and loneliness which makes us great Christians of course not bad people-surely not sinners, I can totally see how people would think - Hey that's what Jesus would do right? Women find multiple male partners exciting too so look out Kenya because what is good for the goose is good for the gander baby!! Male black slaves not really a never done past reality. Yeah - maybe these boneheads should consider the fact that God is not asleep and that those who seek to enslave are sometimes given the opportunity to experience the evil they have perpetrated upon others.

"America" it takes more than condemning Polygamy or any other from of slavery, to free our hierarchy of its guilty conscience regarding it's own oppressive sexist behavior. Prove you really do care about justice for women and stand up for your sisters who have been equally called to the same ordained priesthood you have been called to so they may finally heal and realize their priestly ordination and vocation in our church.

BROTHERS YOU HAVE THE POWER TO MAKE A REAL DIFFERENCE - TO GENUINELY REMOVE REAL OPPRESSION FROM YOUR SISTERS WHO HAVE DONE NOTHING WRONG. PLEASE HELP US AND KNOW YOU HAVE TRULY HELPED TO HEAL OUR CHURCH TOO.