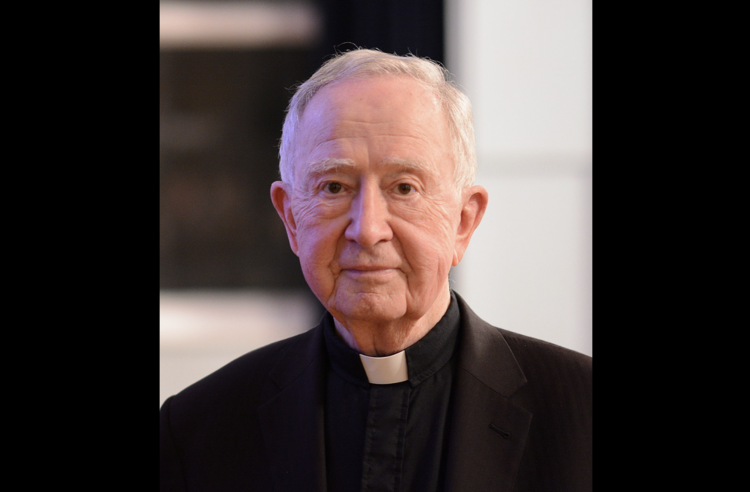 John W. O’Malley, S.J., a renowned historian of the 20th-century church and a longtime professor, died yesterday, Sept. 11, after a brief battle with cancer. He was 95 years old. Father O’Malley is known for his scholarly works on the Catholic Church’s last four ecumenical councils as well as his many writings interpreting the 20th-century history of the Society of Jesus; he was also a mentor both for many Jesuits and a generation of scholars of American Catholic history.

“John O’Malley was special. With great simplicity, he educated and supported generations of scholars,” Dr. Emanuele Colombo, a professor of Catholic studies at DePaul University in Chicago who conducted a series of interviews with Father O’Malley that were published in 2020 in the Journal of Jesuit Studies, told America over email. “He perceived this as one of his tasks, and he did it with great ease and lightness—or, better, with joy.”

"Father O’Malley had a gift, through his writing and lecturing, for immersing students into the riveting drama of history."

Born in Tiltonsville, Ohio, in 1927, Father O’Malley entered the Society of Jesus in 1946 in what was then the Chicago Province. In his 2020 interview with Dr. Colombo, he noted that the Jesuits initially did not accept him because he had attended public school and had only two years of Latin; after enrolling for a semester at John Carroll University for an intensive Latin course, he was accepted to the novitiate.

During his Jesuit formation, he taught history for three years at St. Ignatius High School in Chicago and studied theology in West Baden Springs, Ind. In 1957 he was ordained a priest and sent to Austria to finish his Jesuit formation and study German in preparation for a doctorate on the history of the church in Germany. He would later remember a weeklong trip to Italy at the end of his year there as a moment that changed his life. “I will never forget the moment my eye caught Giotto’s polychrome marble bell,” he wrote in his 2021 memoir The Education of a Historian. “It took my breath away.”

Finding the trip as a whole “like a bolt of lightning out of the heavens,” he decided to forgo German history and instead pursued doctoral studies in Renaissance History at Harvard University, during which time he studied at the American Academy in Rome; he also studied at I Tatti in Florence and was present in Rome during the Second Vatican Council.

"Father O’Malley taught his class without the sense of self-importance that would have been justified given his many intellectual accomplishments."

After receiving his doctorate, he taught and served in administration at the University of Detroit, now the University of Detroit-Mercy, from 1965 to 1979. Father O’Malley served as a delegate at the 32nd General Congregation of the Society of Jesus in 1974-75, a monumental event in the order’s history. He taught for many years at the Weston Jesuit School of Theology, now the Boston College School of Theology and Ministry, and at Georgetown University, where until recently he served as university professor emeritus in the theology department.

Dr. Brenna Moore, a professor of theology at Fordham University, had Father O’Malley as a professor during her doctoral program at Harvard University. “John showed me it was possible to study something that sounds so serious (‘church history’) with warmth, vitality, love and humor. I was so lucky to take his classes back when Weston was in Harvard Square,” she told America via email.

“John provided his students with a way into the big, deep theological questions: What is church? How can we capture that which is mysterious and transcendent in words and communities? He showed me how to think about the things that are now central to my scholarly life,” Dr. Moore wrote. “He was also generous outside of class, pointing me to articles and people who could help me make my way as a young scholar. He was so beloved by so many, including me.”

Kevin Jackson, the studio production operator at America, had Father O’Malley as a professor in 2019. “A spry 91 years old when I met him, Father O’Malley was kind, first and foremost, and he taught his class without the sense of self-importance that would have been justified given his many intellectual accomplishments,” Jackson said. “He took his students seriously and encouraged us to ask the question: ‘So what? Why does this matter?’”

“Father O’Malley had a gift, through his writing and lecturing, for immersing students into the riveting drama of history,” Jackson said. “Who knew a book on Vatican II could read like an adventure novel? I am deeply grateful for the gift of his life and for his kindness to me as my teacher, mentor and friend.”

“John provided his students with a way into the big, deep theological questions."

Father O’Malley is the author of a dozen books, including Giles of Viterbo on Church and Reform: A Study in Renaissance Thought (1969), Praise and Blame in Renaissance Rome: Rhetoric, Doctrine, and Reform in the Sacred Orators of the Papal Court, c. 1450-1521 (1979), The First Jesuits (1993), Four Cultures of the West (2006), What Happened at Vatican II (2008), Trent: What Happened at the Council (2012), Saints or Devils Incarnate?: Studies in Jesuit History (2013), The Jesuits: A History from Ignatius to the Present (2014), The Jesuits and the Popes: A Historical Sketch of Their Relationship (2016), and Vatican I: The Council and the Making of the Ultramontane Church (2018). In 2019, he published his last scholarly work, When Bishops Meet, at the age of 88. In 2021, he published his autobiography, The Education of a Historian: A Strange and Wonderful Story.

Dr. Massimo Faggioli, a professor of theology at Villanova University, stressed the importance of Father O’Malley’s scholarship on current understandings of contemporary Catholic history. “In What Happened at Vatican II, O’Malley’s emphasis on Vatican II as a ‘language event’ revived the interest in the Council from a historical and cultural perspective in a deeply changed ecclesial and global situation,” said Dr. Faggioli in an email to America.

“In a unique way, O’Malley helped rescue Vatican II from oblivion but also from subtle forms of abrogation and delegitimization,” Dr. Faggioli continued. “He saw, before many of us, that there was a real need—if not an emergency—to make a new and different argument about Vatican II in the Catholic Church, where the memory of the conciliar event was often kept alive by those with a veterans’ mentality. This mentality was well-meant but also incapable of reaching newer generations or the peripheries of the post-Vatican II ecclesial establishment.”

Father O’Malley also served as editor of numerous academic volumes and published hundreds of articles in scholarly and popular journals in the fields of American Catholic history, Renaissance history, Jesuit history and the history of the Catholic Church. He contributed to America for 50 years, with his last article, on the rising power of the papacy in the second millennium, being published just three months ago in June 2022.

"His impeccable scholarship has always been for the sake of helping others, not for his own reputation or advancement."

One of the principles he used to guide his own scholarship, Father O’Malley said in 2020, was “if I really understand what is going on, I can explain it to an intelligent ten-year-old child.” Noting that this ran the risk of oversimplification, he said “this approach is a form of correction to myself: I have to be humble enough to acknowledge that, if the ten-year-old does not understand, it means that, deep down, I did not understand.”

“John O'Malley was the dean of Catholic historians, who taught generations of Jesuits, priests, religious men and women and lay people how to understand church history,” said James Martin, S.J., editor at large at America, who was a student of Father O’Malley’s at the Weston Jesuit School of Theology. “His book The First Jesuits was a revelation to me. Until that time, I had read countless biographies of St. Ignatius Loyola, each of them duller than the one before. Then comes John's stunning book, deploying John’s secret weapon: he was a tremendous writer: subtle, lucid, funny.”

When Father O’Malley was honored by Harvard University with a Centennial Medal in 2016, Francis X. Clooney, S.J., his fellow Jesuit and the Parkman Professor of Divinity and Professor of Comparative Theology at Harvard Divinity School, described him in the citation as “a solid and respected historian whose research has shed new light on the Catholic Church as it has grown and changed over the past few hundred years.”

Father O’Malley, wrote Father Clooney, “made that history accessible and relevant to new generations of students, scholars, and leaders. In all this, John integrates intellectual and professional excellence with the sincerity and simplicity of a priestly vocation lived out in 70 years of religious life. His impeccable scholarship has always been for the sake of helping others, not for his own reputation or advancement.”

Funeral and burial arrangements were not yet available at the time of publication.

“He was beloved by his readers, students and brother Jesuits,” wrote Father Martin yesterday. “I don't know anyone who didn't love or admire him.”