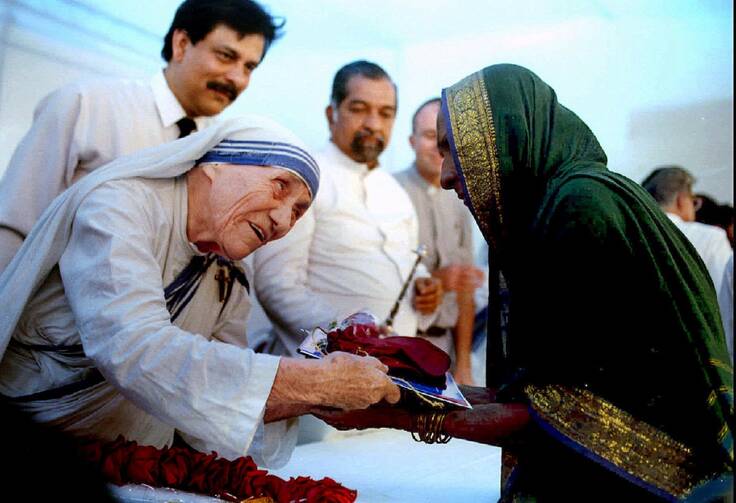 Most people living in the last quarter of the 20th century knew Mother Teresa by name and appearance. They could easily identify her as the saint of the gutters of Calcutta.

She was regularly named as one of the most recognized, influential people in the world. Polls ranked her beside Billy Graham as the most popular religious figures. Good Housekeeping magazine, in 1980, had her atop their list of the world’s most admired women. Even two years after her death, she topped a CNN/USA Today Gallup poll as “the most admired person of the century.” Following her on that list were Dr. Martin Luther King Jr., President John F. Kennedy, Albert Einstein and Helen Keller.

Mother Teresa was regularly named as one of the most recognized, influential people in the world.

Today, recognition of her by sight may not be quite what it was a generation ago, but it is still vivid in the memories of those of us who were adults then. She always wore a white sari with three blue stripes on the edges, one thicker than the others—the religious uniform of the Missionaries of Charity, the religious congregation Mother Teresa established in 1950. Apparently, those saris were first purchased by her “off the rack,” so to speak, according to Kathryn Spink in her authorized biography of the saint, because the blue edges drew Mother Teresa’s attention as the color signaled to her the presence of the Virgin Mary.

For those of us who saw her depicted so often, we remember her small stature, her fierce and strong determination. We never saw video or photos of her appearing weary, winded or, really, at rest. Watching her was easy to do, since Mother Teresa arguably was the first great saint in the era of ubiquitous television. Yet, when we watched footage of her at work with children and the dying, there remained so much we could not see. We had no idea what stirred inside her. We had no knowledge yet of what we would learn after her death: That she felt no personal connection with God for decades.

When we watched footage of her at work with children and the dying, there remained so much we could not see.

Admittedly, there was much to learn from what we could see. Mother Teresa’s surroundings in Calcutta were central to her life and her story. You have surely seen the photographs and footage of women, men and children sleeping on the streets there. Or were they in fact sleeping? They were often lying on the streets unable to sleep—destitute, malnourished, alone. Even if they were lying near others, each looked very much alone. Then a tiny woman in a white and blue sari and sandals bends over to greet them, one by one. What is she doing? We watch. She reaches out a hand and touches an arm or a shoulder. Tiny as she is, she still manages to pick someone up who looks to be almost her own size. This is St. Teresa of Calcutta making her daily rounds.

Other things become clear if you study the photographs or look closely at the videos and documentaries. She had large hands for a woman her size. Mother Teresa was tiny. She stood 5 feet tall in sandals. For comparison, the tiny, mighty Gandhi was 5’5”. Her hands were thick, coarse, working hands; and she was a hugger, particularly with infants and toddlers. She would pull children tightly to her cheek, one arm underneath the torso, the other propping up the neck, the way a natural mother holds a child. And the mouth that easily burst into joyous smiles also often revealed lines of furrow on the brow and pursed determination around the lips.

The images are easy to find and difficult to forget.

The images are easy to find and difficult to forget.

She was our contemporary, and that of St. John Paul II, arguably another contender for the great television saint of the second half of the 20th century. But if her fame is what brought her close to us, into our lives in ways closer and more intricately than the thousands of saints before her, it is that same fame—produced, transmitted and broadcast—that has built a wall between her and us, too. The ubiquity of her presence on our screens a generation ago made her story so well known that many of us did not really work to try to know her at all.

As Marshall McLuhan famously said, more as a description of grim reality than anything else: “The medium is the message.” Do we see her, or do we see the medium? It was, and is still, difficult to see Mother Teresa for who she was and what she did.

The ubiquity of her presence on our screens a generation ago made her story so well known that many of us did not really work to try to know her at all.

It is perhaps easier to come to know one of the saints of the 19 centuries of history before television, for whom we have imagined personality and demeanor and physical traits, than it is to know a great saint of the electronic and digital age. Through prayer, study and other means of devotion, we have come to know saints and their ways with God. With much less visible figures—just about every saint in history is and has been less visible—their “image” has developed slowly over time; and their personality and charism, as people and as figures of holiness, have come to be known only gradually in the hearts and minds of the faithful.

It may be increasingly difficult to identify the obvious saint among us, as Mother Teresa most certainly was, in the days ahead. We are not able to broadcast one image of ourselves and live another. Canonizing saints may be complicated for the church, but for the rest of us identifying one is less so. What Brian Kolodiejchuk, M.C., the advocate in Mother Teresa’s cause for canonization, said is certainly true: “Mother Teresa touched what is most fundamental in every person: the need to love and to be loved.”

We know a saint when we see one. People always have.

Jon M. Sweeney, a frequent contributor to America, is the author of Feed the Wolf and, most recently, Teresa of Calcutta: Dark Night, Active Love (Liturgical Press).