Mary Magdalene showed courage in her darkest hour. We’re called to do the same. 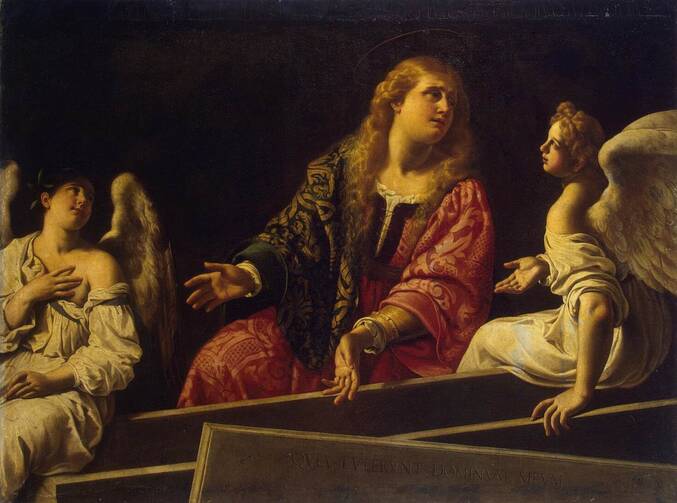 Mary Magdalene at the Tomb by Antiveduto Gramatica. Image from Wikimedia Commons.

A Reflection for the Feast of Saint Mary of Magdala

I have long loved Mary of Magdala, for a number of reasons—most particularly, the fact that my birthday falls on her feast day. In 2016, when Pope Francis elevated our celebration of Mary of Magdala from a memorial to a feast on the church’s liturgical calendar, it felt like an early birthday present. And not just because the feast had been “upgraded” but because the decree announcing it was titled “​​Apostolorum Apostola,” honoring Mary with her traditional title as “Apostle to the Apostles,” the one whom, as our Gospel today recounts, the risen Jesus sends to tell the other apostles the most transformative good news in all of history.

There is an almost endless amount that could be said about Mary of Magdala, and Americahas said plenty of it over the years. We can recognize in Mary a model for the ministry of women as evangelists and preachers of the Gospel; we can marvel at the moment when “she was the church,” as the first and, until she carried out her mission to spread the news, the sole witness of the Resurrection.

But what I’d like to add to this today is a realization about Mary that I had during the first Easter of the pandemic, when celebrating Easter Mass with my Jesuit community in our house chapel during lockdown.

I woke up on Easter morning to a text on the family chain from my youngest brother, who was in his final year of residency as a pediatrician. He had just been informed that their pediatrics unit in the hospital would be temporarily transformed into a Covid ward and that they would be caring for patients, many of whom, during those early and terrifying days of the pandemic, would die alone and isolated, unable even to be comforted by family and friends.

The miracle of the Resurrection was already at work in Mary’s courage and love for Jesus, even before she knew what she was called to witness.

I realized that this had been Mary of Magdala’s experience at the foot of the Cross, watching a friend she loved die without being able to touch him. I realized that, as amazed as I have often been to think about Mary’s mission to announce the Resurrection, that mission was only possible because of Mary’s courage, in her moment of deepest grief, to go to the tomb before she knew that Jesus was risen.

“Mary of Magdala came to the tomb early in the morning, while it was still dark …”

While it was still dark, Mary’s love for Jesus was strong enough to draw her out from fear and self-protection, even when all she hoped to be able to do for Jesus was to help anoint his body or perhaps to weep at his tomb. The miracle of the Resurrection was already at work in Mary’s courage and love for Jesus, even before she knew what she was called to witness.

(Full disclosure here: No preacher ever uses an insight just once, which is something I presume I share with Mary of Magdala, whom I have to believe was called upon to preach, over and over again, her encounter with the risen Jesus in probably every Christian community she visited for the rest of her life. I have preached this message before, both to my own Jesuit community that Easter during lockdown and this past Easter at the Church of St. Francis Xavier.)

How is God calling us to bear courageous witness, even while it is still dark? Where, in the midst of our own fear and grief, is God asking us to venture out in love, even to what may seem to be a tomb? And what miracles, what stones rolled back, might God be asking us to announce to the world after we, inspired by the example of the Apostle to the Apostles, find the courage to go and see?