When only Mary Magdalene knew of the resurrection 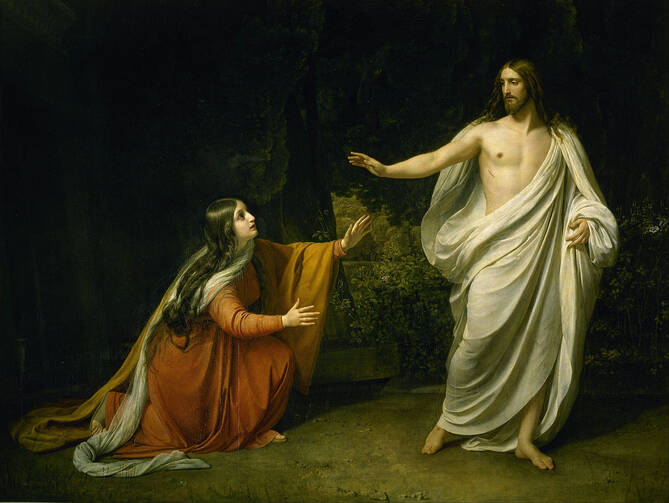 Three of the four Gospels report that the Lord first appeared to Mary Magdalene following his resurrection. Two of the Gospels, moreover, maintain that Jesus’ first post-resurrection appearance was to Mary alone, and the accounts include some description of Mary’s bewildered, frightened and joyful reactions as well as the condescending dismissal she initially received when she shared the good news with the others. The Scriptures do not describe, however, what happened in the time between Mary’s encounter with the risen Lord and the moment when she arrived and joined the other disciples in the upper room.

We can, of course, begin to imagine what those minutes or hours might have been like. We can imagine Mary running, breathless, propelled by hopeful expectation; we hear her heart pounding, almost bursting with joy; we see the tears flowing down her cheeks, past the upturned corners of her ecstatic smile. In those heart-pounding moments, Mary Magdalene would have been the only one who had seen the risen Lord; she would have been the only one in all of history to have heard the good news; she alone was the herald of the Resurrection. Put simply, in those few minutes, she was the church.

When Mary reached the others and announced the good news, the church became, for a time, a handful of frightened believers; but soon they were 100, then 1,000, then 100,000. Two millennia followed, and today there are more than a billion people on five continents, a church of every race and every tongue, yet the one people of God. During her singular moment in salvation history, could Mary have imagined our 21st-century moment? Could she have imagined the world-changing power of her simple message? The world we inhabit, of course, would have been unrecognizable to Mary or any other first-century person. Yet the message we bear is the same; we are heralds of the same Gospel, sharers in the same mission: to testify to the great deeds of God, to invite every person to faith in Jesus Christ.

“Alleluia! He is Risen!”

Our world still needs to hear the Easter proclamation; it longs to hear it, yearns for the freedom it signifies. Yet if our Easter proclamation is to convey the transformative power it bespeaks, then the heralds must be first in faith, repentance and reform. The Easter proclamation is no mere philosophical or theological proposition. It is the beating heart of a living body or it is nothing. Like Mary Magdalene’s, our proclamation must flow from burning, faithful hearts. The disillusioned, weary world that waits in the upper room demands an authentic witness, a credibility that love alone provides. The world must see our salty tears, must sense our breathless hope. They must know that we are not simply vain clanging cymbals in the din of modern life, but the heralds of another person, the One who comes to us in the silence, the creator for whom we long and in whom we dare to hope. If we fail to account for the joy that is within us, then we will have failed to proclaim the risen Lord. In the absence of joy, moreover, a joy that only comes from the one who is truth, then all our other truths are ultimately unintelligible.

In his first homily as successor of St. Peter, Pope Francis said that “to walk, build and confess without the cross means that we are not true disciples of the Lord. We must confess the one cross, and in that way we will be a true church.” Like Mary Magdalene, our discipleship must be in motion. “Our life is a path,” the pope said. “When we stop, the thing doesn’t go.”

In Pope Francis, it seems, the Lord has a herald in deed as well as in word. His first gestures as pope proved deeply moving to millions of observers; prayers for Pope Emeritus Benedict XVI united Catholics all over the world; then—before he offered the traditional blessing urbi et orbi, “to the city and the world,” upon the people gathered below him—came a touching request from the new pope for a “favor,” a blessing from the assembled faithful that again united Catholics in a captivating silence. Pope Francis reminded us that our Easter proclamation must not only be heard, it must seen in humble acts of loving service.

This Easter, then, we give thanks to the Lord for Pope Francis, while we also remember that the latest successor of St. Peter is but one among the billions of successors of St. Mary Magdalene. This Easter we once more join our voices with hers, as we herald among the far and near, amid the untold terrors of earthly life, the good news that is the final hope of the world: “Alleluia! He is risen!”

This editorial has been revised to reflect the following corrections:

I love the story of Jesus appearing to Mary Magdalene (and the other women) after the resurrection. What this means theologically is ignored by the Church. Jesus commissioned Mary Magdalene to announce the good news to his disciples, to preach the Gospel. Women are categorically silenced at the principal liturgy of the church - in direct opposition to this story that appears in all four Gospels.

Women are more attuned to the emotional side of life than men, so they often see what is developing before it becomes obvious to everyone - perhaps this is why Jesus appeared to women first. Women were at the tomb, doing the community's work associated with death and mourning. Only when we are ready to accept that something or someone has died are we able to see what is new. Perhaps this is part of why Jesus appeared to women first.

Jesus appeared to women first and it was not accidental, something he would have done differently if he had taken time to think about it more. The theological lesson is unavoidably clear - Jesus commissioned women to preach. Perhaps the Church should do the same. Only the men of the Church are able to change the doctrine of the Church because women are not allowed any authority to act within the Church. The day will come when the men in the church hierarchy decide to quit ignoring the teaching of Jesus with regard to women, and they will allow women to preach at Mass. Unfortunately, I rather doubt I will live long enough to see that day, but it will come because the Church so desperately needs it.