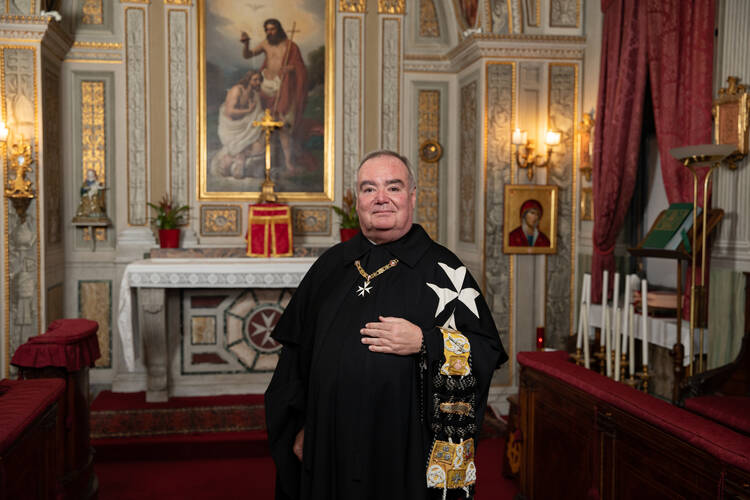 Fra’ John Dunlap was appointed by Pope Francis as the lieutenant of the grand master of the Sovereign Military Order of Malta on June 13, 2022. (Photo credit: Order of Malta)

At first blush, the thread between the Crusades, Napoleon Bonaparte and a hospital serving AIDS patients in Harlem in the 1980s appears thin. But each period, person and place are part of the millennial-long build up to John Dunlap’s vocation. A partner at a New York law firm, Fra’ Dunlap was appointed by Pope Francis as the lieutenant of the grand master of the Sovereign Military Order of Malta on June 13. Fra’ Dunlap is one of the few professed religious of the Order of Malta and is the first North American to lead the Order in such a capacity. (The title “Fra’” is a contraction of “Frater” and is used as a prefix for a small number of Knights of Justice in the Order of Malta who have professed vows of poverty, chastity and obedience and are treated as “religious” under canon law).

Founded during the Crusades in 1099, the Order of Malta is both a religious order obedient to the pope and a sovereign government that maintains international relations with 120 countries. The Order rose to prominence over the centuries, eventually ruling the island of Rhodes and, subsequently, Malta. The Order of Malta’s government was forced from Malta by Napoleon in 1798 and officially entered into exile. Throughout the 19th century, the Order found refuge in the Papal States and under the Holy See. The 20th century saw the development of the Order’s international charitable arms.

A partner at a New York law firm, Fra’ Dunlap was appointed by Pope Francis as the lieutenant of the grand master of the Sovereign Military Order of Malta on June 13, 2022.

In addition to the 13,500 knights, dames and chaplains of the Order, there are 95,000 permanent volunteers and 52,000 employees, most of them medical personnel, engaged in the charitable works of the Order in 120 countries. From Holy Family Hospital in Bethlehem to the Global Fund for Forgotten People to annual pilgrimages to Lourdes with the infirmed and support for refugees, the disabled and the poor, the Order has one of the largest humanitarian footprints in the world.

Fra’ Dunlap comes to this position at a crucial moment in the life of the Order.

In 2017, Pope Francis encouraged the Order to begin a process of constitutional reform, which has been complicated by the deaths of two grand masters (the principal authority within the Order), the sudden death of the most recent lieutenant of the grand master (a position equal in power to that of the grand master save for the honorifics) and the removal of the pope’s initial special delegate to the order, Cardinal Angelo Becciu, who is currently facing corruption charges in a Vatican court. These reforms are meant to institute a constitutional and leadership model that would allow the Order of Malta to flourish in the 21st century.

Founded during the Crusades in 1099, the Order of Malta is both a religious order obedient to the pope and a sovereign government that maintains international relations with 120 countries.

Fra’ Dunlap’s introduction to the Order and his discernment of a religious vocation began while volunteering with AIDS patients at the Cardinal Cooke Medical Center in Harlem in the mid-1980s.

“I am a cradle Catholic from Ottawa and was always quite religious, but I went to New York and, while there, was introduced to a knight of Malta who got me involved in the Order,” Fra’ Dunlap told America. “They started me at a hospital in Harlem, and I’ve been there every week for the last 30 years—that’s where my vocation came from.” He was admitted to the Order in 1996.

The vast majority of knights and dames of the Order make commitments to the Order, but only a select few choose and are approved to enter into the full religious life of the Order and commit themselves to the vows of poverty, obedience and chastity.

“There was a knight in Washington, Fra’ James Michael von Stroebel, who said, ‘Why don’t you take vows?,” Fra’ Dunlap said. “And I entered into a serious time of prayer and discernment and determined that I was ready and that this is what God wanted me to do.”

“As a religious, I keep the hours and attend Mass every day. In particular, Our Lady of Philermo, the patroness of our Order, is very close to my heart.”

“It’s a different kind of vocation because you stay in the world and you keep working,” Fra’ Dunlap noted. “As a religious, I keep the hours and attend Mass every day. In particular, Our Lady of Philermo, the patroness of our Order, is very close to my heart.”

Fra’ Dunlap held a number of leadership roles over the last decade. But lieutenant of the grand master—a position vacated by the late Fra’ Marco Luzzago, who died suddenly on June 7—is the most senior position in the Order, and one that will be critical in its future shape and governance. The lieutenant of the grand master is responsible for legislative measures not covered by the Constitution, promulgates government acts, manages financial assets and ratifies international agreements.

Fra’ Dunlap sees his new role as another opportunity to use his skills as an attorney to serve the Order. “This position is a different type of service than I began my time with in the Order, but it is a service to the Order [through which] I am hopefully furthering service to the sick and the poor, which is at the core of our mission.”

His appointment is extraordinary in the sense that the lieutenant of the grand master is traditionally elected per the constitutional charter of the Order. Fra’ Dunlap, however, received his appointment directly from Pope Francis.

“I think that the Holy Father’s appointment of me as lieutenant of the grand master would speed up the reform efforts, from a practical perspective,” Fra’ Dunlap said.

“I think that the Holy Father’s appointment of me as lieutenant of the grand master would speed up the reform efforts, from a practical perspective,” Fra’ Dunlap said. “Rather than spending months electing a new lieutenant, we can continue these efforts and return the Order to regular work sooner.”

While the reform effort has been less than smooth over the last five years, Fra’ Dunlap is committed to seeing it through as a matter of necessity. “The reform effort is meant to modernize the Order. We’re too few Fra’s right now to cover the growth of the Order. We have to handle overlapping jurisdictions of authority. We have to amend the way we elect the grand master. And we have to figure out how we get better representation from areas where the Order has never been before, for example, from somewhere in Asia.”

One of the biggest questions around the constitutional reform concerns the requirements of nobility for leadership. “Our Constitution needs an updating. There’s no one who really even qualifies to be grand master anymore according to the Constitution. They require 450 years of nobility on each side of the candidate's family.” Fra’ Dunlap himself is an exception to the rule—lieutenants of the grand master are held to the same noble requirements, and Fra’ Dunlap’s own family record of nobility only goes back several decades.

“The tremendous growth of the Order in the 20th and 21st centuries has been principally in the New World,” Fra’ Dunlap said. “Most of these folks do not have noble lines or, if they do, they don’t look them up. I have no problem with different grades in the Order, but I don’t think we can have [nobility] as a prerequisite to a position.”

“We will always be a Roman Catholic religious order under the pope,” Fra’ Dunlap said. “There’s no question about that.”

Then there are questions around the structure and powers vested in the leadership of the Order. “Some have suggested that the grand master be treated more as a constitutional monarch and empower the grand chancellor [a quasi-prime minister],” Fra’ Dunlap said, “and others have suggested strengthening the role of the grand master.” At the very least, it is a work in progress and the consultations have been extensive.

Fra’ Dunlap is frank and clear eyed about his role in this process. “We are working it out. My role right now is to get all sides talking,” he said. “As the Holy Father noted to me, ‘Bring peace, John.’ Hopefully we can get a Constitution together that everyone can agree on moving forward with and then we can go ahead and elect a new grand master.”

Questions have also been raised about the relationship between the Order as a sovereign entity and their religious obedience to the papacy. Fra’ Dunlap looks at this as an extraordinary instance of collaboration between the Holy See and the Order but says certain hallmarks of the Order will remain unchanged.

“We will always be a Roman Catholic religious order under the pope,” Fra’ Dunlap said. “There’s no question about that.” He also reaffirmed that the Order’s status as a sovereign entity will be unchanged and that it will continue to represent itself and make its own decisions as an international legal personality.

In the meantime, in addition to guiding the reform efforts, Fra’ Dunlap sees his duty as continuing to support and promote the charitable and religious endeavors of the Order. “For example, the work that the Order is doing in Ukraine is incredible. We have helped almost 450,000 refugees in a variety of ways,” Fra’ Dunlap said. “The help that we have received from governments and people—[it] has been heartwarming to see so much goodness.”

At the end of the day, Fra’ Dunlap believes that this 1,000-year-old Order, obedient to the pope and sovereign unto itself, will continue to meet the needs of the next millennium in service to the poor and in defense of the Catholic faith.