Analysis: In Vatican real estate trial, prosecution made mistakes—but not enough for charges to be dropped against Cardinal Becciu 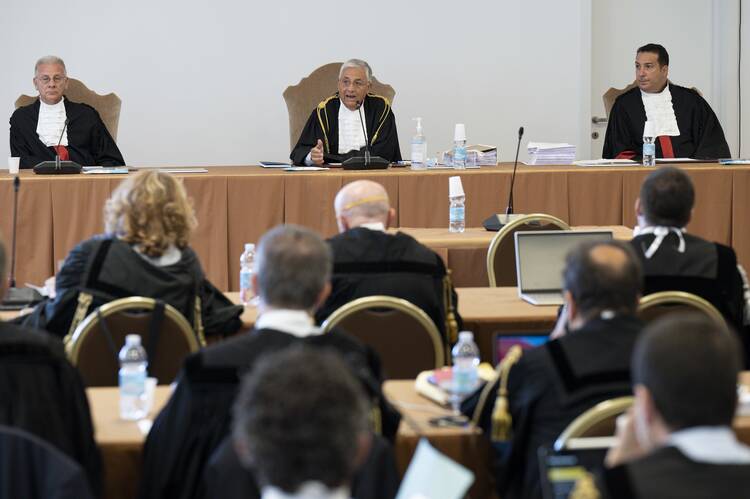 The three judges of the Vatican tribunal today rejected calls by the defense lawyers of Cardinal Angelo Becciu and nine others to nullify the indictments for finance-related crimes against their clients. The defense team claims that serious procedural errors committed by the Vatican prosecutors in the process leading to their indictment violated the rights of the defendants to a fair trial.

The errors, which the Vatican prosecution admitted and expressed its willingness to correct, included failure to make available the full documentary and video-recorded evidence against the accused to the 10 defendants and their lawyers. The prosecution also failed to present the defendants with all the charges against them before indicting them and sending them to trial.

He said the court acknowledged that the defense lawyers’ arguments were valid “to a limited degree,” but they were not enough to convince the tribunal to nullify the indictments. Responding to the defense’s “legitimate requests,” Judge Pignatone said the court issued specific instructions to the prosecution that must be carried out by Nov. 3.

Judge Giuseppe Pignatone said the court acknowledged that the defense lawyers’ arguments were somewhat valid, but they were not enough to nullify the indictments.

One of the court’s instructions to the Vatican’s prosecution team was to make its evidence available to the accused and their lawyers. This includes all the documentary, audio-visual and other evidence, which the prosecutors obtained by intercepting communications that the accused engaged in with other persons involved in the trial.

The court specifically ordered the prosecution to make available the video-recorded testimony of its star witness, Msgr. Alberto Perlasca. The Italian monsignor was the former head of the administrative office of the Vatican secretary of state. He was one of Cardinal Becciu’s closest collaborators in the controversial purchase of the London property that is at the center of this trial.

Vatican prosecutors originally interrogated Monsignor Perlasca twice as an accused person. But after the second interrogation, he decided to collaborate fully with the Vatican magistrates, at which point he was interrogated three times in sessions that were recorded on video.

Although the court ordered the Vatican prosecution to make these recordings available to the defense at the trial’s first hearing in July, the prosecutors have so far only provided what appears to be an edited transcript of those interrogations. The prosecutors claimed that they did not release the full video recordings “for reasons of privacy” of the persons involved in the interrogations, lest they subsequently appear on Italian television. After today’s verdict, the prosecution has no alternative but to release the video recordings to the defense.

The court ordered the prosecution to make these recordings available to the defense, but the prosecutors have so far only provided what appears to be an edited transcript.

Significantly, the court also demanded that the prosecution clarify the status of Monsignor Perlasca at the Nov. 17 hearing. The tribunal wants to know if he will be indicted or not, since the Vatican penal code does not allow an accused person to avoid prosecution by becoming a state witness.

The court also instructed the prosecution to retract certain pieces of evidence. According to Vatican law, the prosecution must present the evidence to the accused before submitting it to the court—something that the prosecution in this trial failed to do for some of its indictments against the 10 defendants. This is considered a serious procedural failure by the prosecution, as it deprives the accused of a chance to defend himself.

For example, the prosecution will have to retract the evidence for two of the four charges against Cardinal Becciu. The team must then confront him in person with the evidence before filing the charges again in court.

One element of the evidence relates to the allegation that the cardinal had sought to interfere with Monsignor Perlasca in his capacity as a witness. The prosecutors alleged that Cardinal Becciu asked Monsignor Perlasca’s bishop to convince the monsignor to withdraw testimony that he had given to Vatican prosecutors.

In a historic first, a cardinal stood trial at the Vatican over involvement in a real estate scandal
Gerard O’Connell

This is a very serious charge, and while the prosecutors appear to have strong evidence for this (as outlined in the 488-page deposition they filed with the court for this trial), they failed to confront the cardinal with this accusation before they filed the indictment. The cardinal only learned of this charge on July 3, when the court published the indictment and sent him for trial on this and three other charges.

The court has given the prosecution time to confront all the accused with evidence for the various charges against them for which prosecutors had failed to do so prior to the initial indictments. The prosecution is to represent the new indictments before the trial resumes on Nov. 17.

Given these delays, the trial is destined to last at least through next year, just as one of Cardinal Becciu’s lawyers told America at the first hearing.