Rabbi: Jews are flourishing in America. For that, I thank the Catholic Church. 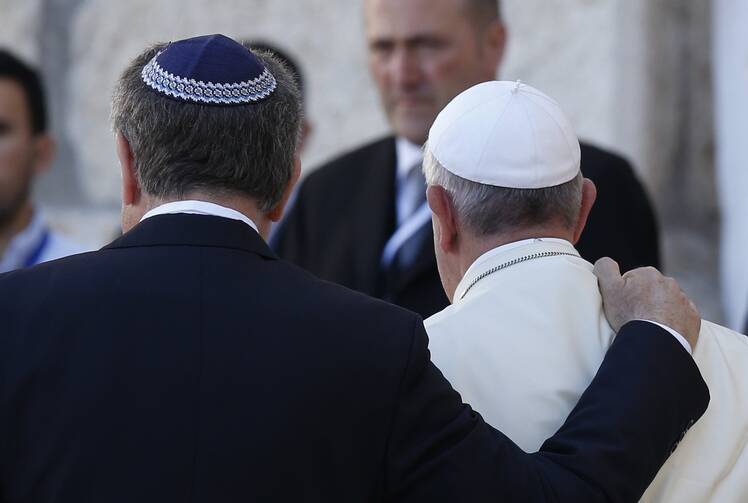 Rabbi Abraham Skorka of Buenos Aires and Pope Francis embrace after visiting the Western Wall in Jerusalem on May 26, 2014. Interreligious dialogue is a tool for preventing religious extremism, Pope Francis told the International Jewish Committee on Interreligious Consultations on June 30, 2022. (CNS photo/Paul Haring)

“It is important for priests to have good relations with the Jews. If you are antisemitic, you cannot be ordained. It is against the teaching of the church, of ‘Nostra Aetate,’” said Cardinal Luis Ladaria Ferrer, referring to the document that is a key part of the Second Vatican Council’s accords on interfaith collaboration. He concluded: “If you don’t agree, you cannot be a priest.”

Cardinal Ladaria made these comments to a delegation of 20 rabbis and Jewish leaders (including myself) from the International Jewish Committee for Interreligious Consultations, who visited the Vatican for a biannual meeting of the International Liaison Committee this week. To Cardinal Ladaria, prefect of the Congregation for the Doctrine of the Faith, this was perfectly evident. To us, it remained a marvel. Cardinal Ladaria heads the arm of the Vatican that conducted the Inquisition, which, beginning in the 15th century, persecuted Jews for hundreds of years. He is one of many colleagues who affirmed similar sentiments to us during our visit, often speaking in glowing terms about the commonalities of our faiths.

Until the Second Vatican Council, and in particular the 1965 conciliar document “Nostra Aetate,” a declaration on the relation of the church to non-Christian religions, such commentaries were few and far between. But after years of introspection in the wake of the Holocaust and after years of private meetings with Jewish leaders, the Catholic Church not only shifted away from language blaming generations of Jews for Jesus’ death, but toward outright and systematic philosemitism. It has since become a source of protection to Jewish communities, with some lapses, but overall there has been an institutional change to a degree that would have been difficult to imagine.

The Jewish awakening in the United States may well be due in part to a miracle of the Catholic Church.

The Pontifical Commission for Religious Relations with the Jews, which oversees Vatican policy with the Jewish community, sits within the Pontifical Council for Promoting Christian Unity; this structure implies that, in every sense, Jews are brethren in faith. Cardinal Kurt Koch, a leading Catholic theologian who presides over the commission, meets regularly with his Jewish counterparts from around the world, as he did once more on June 27.

Our meetings with key Catholic leaders, including Cardinal Pietro Parolin, Vatican secretary of state, and Cardinal Leonardo Sandri, prefect of the Congregation for the Oriental Churches and deputy dean of the College of Cardinals, took place in an atmosphere of longstanding friendship. We were communicating as siblings who had overcome rivalry and now appreciate our common parentage.

Pope Francis himself looks to Rabbi Abraham Skorka, Argentina’s former chief rabbi, as one of his closest friends, thought-partners and confidants. His condemnation of antisemitism as “neither Christian nor human” has helped vulnerable Jewish communities. (Our delegation missed meeting with Pope Francis this week, who had to cancel his minute with us because of knee pain, but our group has repeatedly met with him in the past.)

Pope Emeritus Benedict has remained in active theological dialogue with his Jewish counterparts, even after his tenure as the head of the church came to an end. Closer to home, the U.S. Conference of Catholic Bishops maintains deep a connection to the National Council of Synagogues, co-convening regular meetings and dialogues and working actively to combat antisemitism.

We were communicating as siblings who had overcome rivalry and now appreciate our common parentage.

There is a direct link between these signs of extensive change and ongoing expressions of philosemitism within the Catholic Church and an unfolding awakening of Jewish life taking place across the Jewish community in the United States. For the first time in millennia, the Jewish community can define itself in positive terms, rather than being defined primarily by external hostility. Our population is growing, bolstered by rising numbers of converts; and despite continued antisemitism, the Jewish community is consistently identified in Pew Surveys as the most well liked religious community in the United States. Jewish organizations are struggling not because of their failures, but because of their astounding success in helping our population acculturate and thrive.

It would be difficult to imagine this efflorescence of American Judaism without the largest religious organization in the world delegitimizing antisemitism and making evident that Jews are a beloved part of a larger religious family. The Jewish awakening in the United States may well be due in part to a miracle of the Catholic Church.

Jewish and Catholic leaders would do well to safeguard this progress together. Not all current leaders are as familiar with “Nostra Aetate”as their forebears of a generation ago in either of our communities, which suggests that there is the potential for backsliding in the years ahead. This may be particularly true if future Catholic leaders are not as familiar with the Second Vatican Council or are not personally connected to the Jewish community as are either Pope Francis or the members of the curia with whom our delegation met.

“Nostra Aetate” needs to become a staple of the curriculum in Jewish and Catholic schools, especially within seminaries where priests and rabbis are trained. It needs to become a case study in reconciliation, peacebuilding and overcoming of the polarization with which our society is rife. As Pope Francis conveyed to our delegation this week, by way of Cardinal Koch, “Interreligious dialogue is a privileged path to the growth of fraternity and peace in our world.” And this fraternity and peace can combat religious and political extremism.

If “Nostra Aetate” meant “In our time” six decades ago, we should make it so in our own as well. 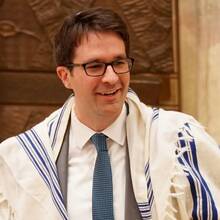 Rabbi Joshua Stanton is spiritual leader of East End Temple and senior fellow of CLAL, The National Jewish Center for Learning and Leadership. He is coauthor with Rabbi Benjamin Spratt of Awakenings: American Jewish Transformations in Identity, Leadership, and Belonging.