The future of the U.S. Catholic Church is Latino. Our youth ministry programs need to reflect that. 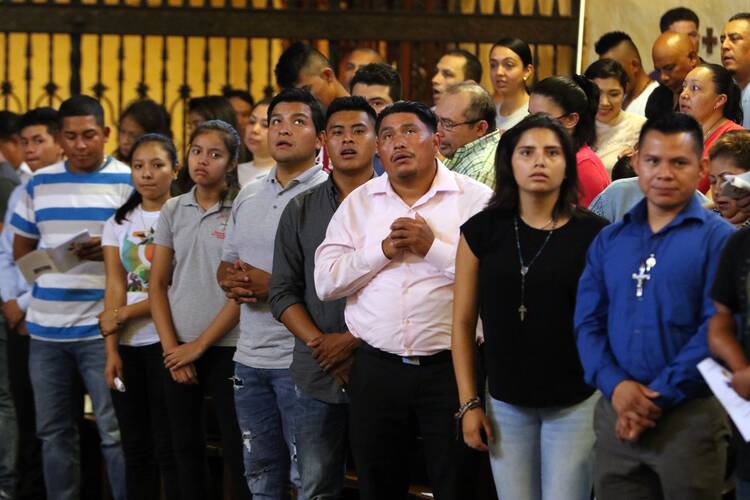 It is well known by now—or at least it should be—that the future of the Catholic Church in the United States is decidedly Latino. Latinos account for more than 40 percent of Catholics overall and most Catholics under 30 trace their roots to Latin America.

Most Catholic Latino families speak both English and Spanish languages at home, according to the V Encuentro, a multi-year dialogue conducted by the U.S. bishops to better serve this growing community. But Latino children born in the United States are more likely to prefer English over Spanish, according to a number of Pew studies. That poses a challenge for parish-based youth ministries with limited resources seeking to reach Latino families.

Most Catholic Latino families speak both English and Spanish languages at home, but Latino children born in the United States are more likely to prefer English over Spanish.

“We’re in various stages of figuring out what youth ministry in the Latino community needs to look like,” Darius Villalobos of the National Federation for Catholic Youth Ministry told America. “I phrased it intentionally that way because there is no one model or one approach that I think is being implemented consistently across the country.”

Many parishes use “Pastoral Juvenil,” which is an adaptation of the Latin American model of ministry with young people, Mr. Villalobos said. It is more common in immigrant communities and among ecclesial movements, and especially effective with those who speak Spanish predominantly.

“But we know that the vast majority of young people who are Hispanic Catholics are second- and third-generation,” he said. “We’re trying to figure out a balance, taking into account the language needs and the cultural needs.”

Good youth ministry must also include the parents, Mr. Villalobos said, especially within the Latino context. While some programs might separate parents from their children, he said, Hispanic families tend to prefer to do things together. That can create another challenge when parents are more comfortable in Spanish and their children prefer English.

“It needs to be intergenerational,” he said. “Good ministry with Latino young people needs to take that language question seriously. We’re trying to build some bridges between generations, between cultures and between religious experience.”

“Good ministry with Latino young people needs to take that language question seriously. We’re trying to build some bridges between generations, between cultures and between religious experience.”

Our Lady of Guadalupe is central to the faith of many Catholics, especially those with roots in Mexico, he said. But youth ministry among Puerto Rican Catholics has to also include la Virgen de la Divina Providencia. Youth ministers also need to hold up new Latin American saints, like St. Óscar Romero.

And why not include piñatas for celebrations?

His points resonate with Gloria Mancilla, a youth minister at St. Anthony Parish in Davenport, Iowa—and mother of two teenagers.

“The only problem I see in my church that we need to work on is bilingual evangelization,” she said. “A lot of our kids prefer English. They want to be able to hear the message in a language they understand.”

Even if parents hand down their culture to their children and take them to Spanish-language Mass, kids in youth ministry programs are speaking English eight hours a day at school, she said. “They come home and listen to music in English. They’re exposed to TV in English,” Ms. Mancilla said. “So basically, 80 percent of their life is in English, and maybe 20 percent is in Spanish with their mom and dad at home. But if their parents are always working, they don’t have anyone to speak to them in Spanish.”

If the retreats and other events are in Spanish, they will not connect, she said, or they will get bored. “But when you’re exposing them in their own language and even use Spanglish, they get used to that. And they understand,” Ms. Mancilla said. “I feel like that’s where we need to work in my parish.”

The vast majority of youth ministers are not Latino. That is why building intercultural competencies is key.

Her former parish, St. Mary’s, merged with St. Anthony in 2020, a challenging process made more complex by the pandemic, Ms. Mancilla said. “We do a lot of the cultural stuff that was part of St. Mary’s,” she said. “It was a shock to parishioners of St. Anthony’s because they have never been exposed to any of that—quinceañeras, Our Lady of Guadalpue, las Posadas, the Day of the Dead.”

“I’m still on Facebook and Twitter,” said Father Treviño, who at 36 might still be considered young for a priest. “I was a baby priest, but now I joke and say I’m a toddler priest. I’m still learning.”

Most messages go out in English, but there is one teenager in the program who recently arrived in the United States from Latin America. Father Treviño speaks with him in Spanish.

“For every millennial that comes in, six leave. If a company was experiencing the same rate of loss, it would be a crisis…. They would completely revolutionize how they did business.”

“In Latino ministry, there’s no cookie-cutter program,” said Father Treviño, who was born in San Antonio, Tex., and grew up bilingual. “It really just depends on each area, what generation, and even then it varies over time.”

The need to find the right mix is even more critical in light of the number of young people leaving the church. According to a Public Religion and Research Institute survey released last July, 36 percent of Americans 19 to 29 do not associate with any particular religion. In 2006, PRRI found that 23 percent of young people in that age group were not affiliated with any religion.

Some young Catholics are trying to do something about that. Father Treviño noted a talk given by Martin Soros during the Raices y Alas conference in particular. Mr. Soros, who at 18 will be a freshman at the University of Notre Dame this fall, named polarization within the church as a major problem. Debates about which politicians should be allowed to receive Communion, while important, are not helping, he said.

“For every millennial that comes in, six leave,” Mr. Soros said, referencing a 2019 talk given by Bishop Robert Barron to the U.S. Conference of Catholic Bishops. “If a company was experiencing the same rate of loss, it would be a crisis…. They would completely revolutionize how they did business.”

But that is not happening in the church, he said. “I know that the church is not a business. But if it was, our product would be the Gospel,” Mr. Soros said. “If these people had a strong relationship with Jesus, they would not be leaving the church.”

“A good youth ministry program in a multicultural space can be where you integrate communities together and allow for them to really have an appreciation for different cultures.”

While a third of Americans report being raised Catholic, only 21 percent now identify as Catholic, according to a 2016 PRRI study on the disaffiliated. The study also reported that 62 percent of those who left their childhood religion did so before turning 18.

The same study reported that Americans who had left their childhood faith most often cited three reasons as “important” in their decision:

“These are not the real causes why people leave the church,” Mr. Soros said. “These reasons simply facilitate young people leaving…. The question parents, youth ministers, priests and catechists need to be asking themselves is: ‘How are they going to understand the love of God?’”

The 2016 study did not focus on ethnicity, but according to Mr. Villalobos, if you talk about youth ministry today, it must include the growing Latino population. “Because they are quickly becoming the majority of those we serve,” he said. “But we haven’t necessarily adapted our models to reflect that.”

Being bilingual, for example, would help youth ministers communicate to both teenagers and their parents. But not all youth ministers are bilingual, Mr. Villalobos said, and religious publishers are not providing enough materials that are completely bilingual in English and Spanish. (Ministers often have to choose material either in all-English or all-Spanish formats.)

The field of youth ministry, Mr. Villalobs added, does not reflect those it seeks to serve. In other words, the vast majority of youth ministers are not Latino. That is why building intercultural competencies is key, he said, commending the U.S. Conference of Catholic Bishops for its efforts in that regard.

“A good youth ministry program in a multicultural space can be where you integrate communities together and allow for them to really have an appreciation for different cultures,” Mr. Villalobos said. “It’s probably the easiest place that you can do that kind of work. Adults can be a little set in their ways, but young people tend to be open and willing to share.”