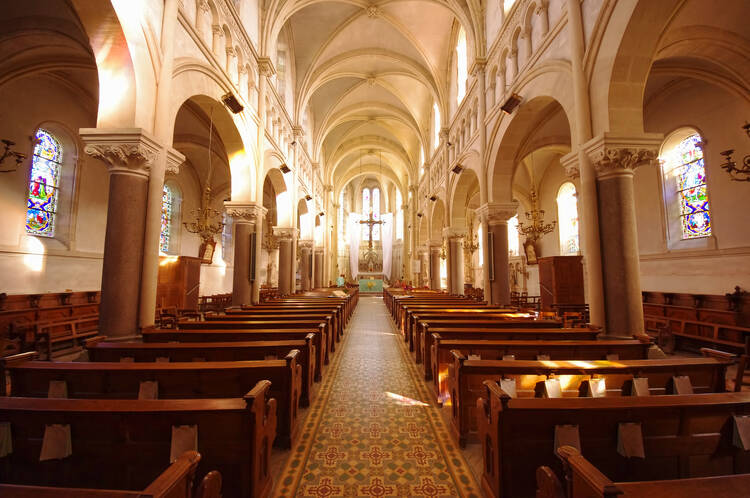 A Pew study released in December found that 29 percent of Americans are not affiliated with any religion, up from 16 percent when Pew first asked the question in 2007. (The number of people in the United States who self-identify as Catholic has held steady at 21 percent.) But there is not merely a shift in how people express religion publicly. The outlook for personal spirituality is similarly bleak. According to Pew, almost a third of U.S. adults report that they pray rarely or not at all, up from 18 percent in 2007.

Young people in particular have distanced themselves from religion. Another survey, released by the Public Religion Research Institute last summer, found that an even higher share of 18- to 29-year-olds, 36 percent, do not associate with a particular religion. Younger Catholics have also told one research team that they are now less willing to attend Mass than before the pandemic began.

These statistics are no surprise; they confirm a longstanding pattern of secularization in the United States. Over the last half-century, academics from various disciplines have written at length (often in these pages) as they have attempted  to explain  this dramatic turn away from religion. Meanwhile, dismayed faith leaders and churchgoers alike have been left to ponder whether they are members of a dying species of those who look to God for an understanding of the world.

Dismayed faith leaders and churchgoers alike have been left to ponder whether they are members of a dying species of those who look to God for an understanding of the world.

Depending on who is being asked, people have stopped going to church either because the liturgy is too stuffy and antiquated or because it is not as reverent as it used to be; the church has not done enough to listen to the faithful’s concerns on L.G.B.T., contraception and abortion issues, or it is already too accommodating on these fronts; the hierarchy either does not place enough emphasis on pastoral ministries, or it does not pay enough heed to doctrine. Underlying all of this, revelations of widespread sexual abuse and its coverup by religious authorities have significantly dampened the religious practices of American Catholics.

But just as often as certain Catholics look to specific issues of the institutional church to account for increasing secularism, others tend to explain it away by blaming it on the morality of nonbelievers themselves. Some believe people do not go to church because they are lazy, while others believe it is because church teaching is antiquated. If it is laziness, there is no point in trying to welcome back wayward Catholics; there is no cure for sloth. If it is outdated church teaching, the temptation is to say the church simply needs to get with the times, and the lost shall be found. Neither way of thinking offers much inspiration for the church’s evangelical mission.

But what if there is a different way to look at the decline of religious practice in the United States? Have the “nones” consciously rejected religion, or have religious institutions failed to involve them and respond to their needs? Do they lack belief in God, or do they no longer see the church as representing the God they believe in? Has a mixture of all of these factors gotten us to where we are today, with both society and the church sharing some responsibility?

Have the “nones” consciously rejected religion, or have religious institutions failed to involve them and respond to their needs? The only way to find out is by asking.

The only way to find out is by asking, and the Catholic Church is attempting to do precisely that. Pope Francis announced that the meeting in 2023 of the Synod of Bishops—as the culmination of a three-year worldwide process—would focus on finding ways to make the church one that “walks together” instead of one that follows the lead of a select few. The pope is encouraging the church to envision itself more creatively as the body of Christ. The church should not be characterized by a hierarchy exerting its power over the laity, he has urged, but by charitable dialogue among all bishops, priests, deacons, laypeople and religious, as well as with the wider world.

Pope Francis has made it clear that the diocesan phase of this synod should not be limited only to people who show up to Mass every Sunday. Instead, the synod’s preparatory document calls for listening not only within the visible structures of the church but also in encounters with “people who are distant from the faith” and with the “poor and excluded” (No. 29). Only by listening to those at the margins can the church truly be universal.

To that end, all diocesan leaders coordinating the first phase of preparation for the Synod of Bishops should make a concerted effort to reach out to those people who are disaffiliated with religion, especially lapsed or nonpracticing Christians. Many dioceses have already set forth detailed plans to include marginalized groups in the synod, but these efforts ought not to be limited to a handful of local churches.

Only by listening to those at the margins can the church truly be universal.

The voices of the nones are crucial for understanding where the church has lost people on both the local and global levels—for how can we bring people back into the church if we do not even know why they left in the first place? By listening to those who feel alienated from Christianity or even apathetic to it, the church will make great inroads in learning about those aspects of pastoral outreach that it needs to improve.

Just as the church has much to learn from these lost sheep, it also has much to offer them in return. Engaging nones in the synod offers a prime opportunity for evangelization—not through proselytizing but by demonstrating accompaniment and dialogue in practice, and by offering an example of how the church can live out its mission of helping the downtrodden and outcast.

In the months since America first reported how inconsistently U.S. dioceses were preparing for the synod, there has been some progress in solidifying plans for the listening phase. Going forward, U.S. dioceses must maintain this momentum. It is a massive and difficult undertaking, but the church in the United States must not succumb to the temptation to treat the synod as though it were merely another chore. Synodality should remain at the forefront of diocesan and parochial consciousness for years to come.

With a third of Americans estranged from organized religion, there is no time to lose. It is ultimately only God’s grace that can bring people back to the faith. Even so, all members of the church have a responsibility to do as much as they can to bring God’s people back to himself—and there is perhaps no better way to do this than through the current churchwide synodal process.