Podcast: How the Vatican could change Catholic marriage preparation 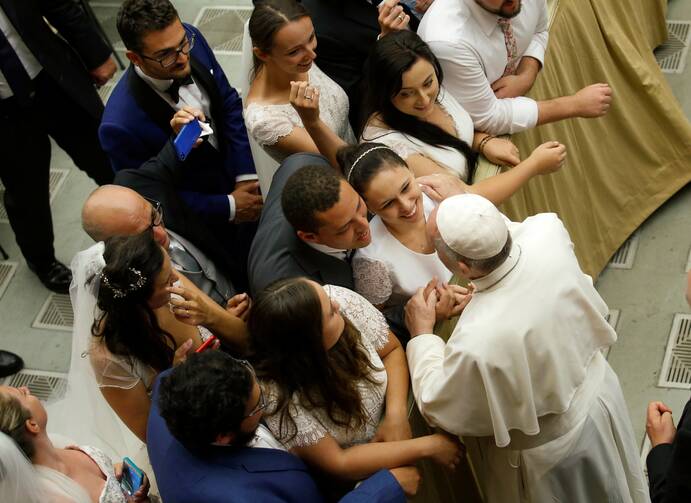 Pope Francis greets a group of newlyweds during his general audience in Paul VI hall at the Vatican Aug. 21, 2019. (CNS photo/Remo Casilli, Reuters)

The World Meeting of Families is happening in Rome this week, and there has been much family-related news out of the Vatican recently. The Vatican has issued new guidance on marriage preparation, saying couples should go through a yearlong program before getting married in the church, and the Vatican’s office of Laity, Family and Life has seen a few big reforms.

To learn more about these stories, America Vatican correspondent Gerard O’Connell recently interviewed Cardinal Kevin Farrell, prefect for the Vatican’s Dicastery for Laity, Family and Life. This week on “Inside the Vatican,” Gerry and host Colleen Dulle recap the Vatican’s recent family-related news through the lens of Gerry’s interview with Cardinal Farrell.

[Listen and subscribe to Inside the Vatican onApple Podcasts andSpotify.]

Two reforms Cardinal Farrell has made: First, he has increased the share of lay people working in his office. Today, only four of the office’s almost 40 employees are priests, and Cardinal Farrell told Gerry he believes he could be the last cleric to head the office. Second, he established term limits for members of lay movements like Sant’Egidio and the Focolare. (If you don’t know what those are, don’t worry; we explain it all on this week’s show.)

Together the Vatican’s updates to formation for married couples, families and members of lay movements are aimed at realizing Pope Francis’ vision of a dynamic church in which older people teach and share leadership with younger people, and in which no one’s pastoral needs are overlooked.

Lastly, we’d love your feedback on the show! Please take this brief 2022 ITV Listener Surveyand let us know what you’d like to hear in future episodes!

Cardinal Farrell: ‘I believe I could be the last cleric in charge of this dicastery’