Podcast: Pope Francis takes on accusations that he is ‘pro-Putin’ 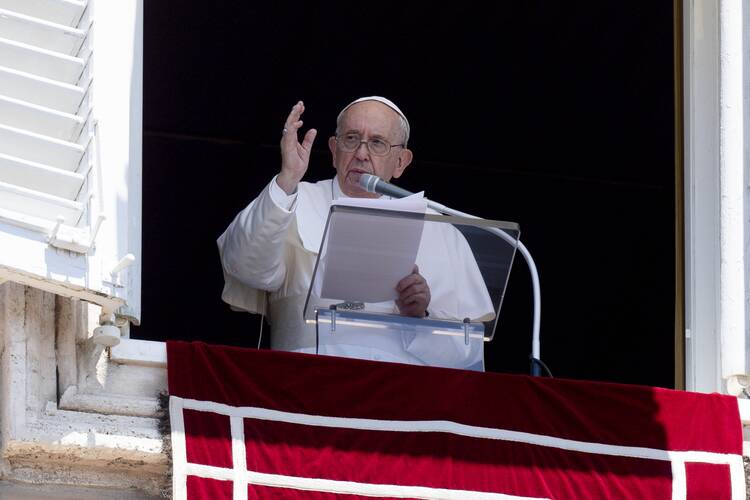 Pope Francis gives his blessing from the window of his studio overlooking St. Peter's Square at the Vatican June 12, 2022, after praying the Angelus with people gathered in the square. (CNS photo/Vatican Media)

Pope Francis gave a wide-ranging interview to the editors of the European Jesuit journals—America’s across-the-pond counterparts—that was published this week. In the interview, Pope Francis takes on accusations that he is “pro-Putin” and argues that a failure to accept the Second Vatican Council is at the heart of church polarization today.

On “Inside the Vatican” this week, host Colleen Dulle and veteran Vatican correspondent Gerard O’Connell unpack the pope’s interview.

[Listen and subscribe to Inside the Vatican onApple Podcasts andSpotify.]

Speaking about the war in Ukraine, Pope Francis told the editors that World War III had been declared. But what does this mean? Colleen and Gerry examine the pope’s rhetorical shift from describing a third world war fought “piecemeal” to a “declared” world war.

In the second half of the show, Gerry and Colleen look at the pope’s comments on “restorationism,” which Gerry defines as “going back to the past. You don’t want the new things; you want things as they were before.” Pope Francis commented to the European editors that there are many such people in the United States, who want to return to a pre-Vatican II era without having ever accepted the council’s reforms. “Restorationism,” the pope said, “has come to gag the Council.”

Lastly, the hosts discuss the postponement of Pope Francis’ scheduled trip to the Democratic Republic of the Congo and South Sudan, and what effects the postponement has for people in those countries who were expecting the pope.

Lastly, we’d love your feedback on the show! Please take this brief 2022 ITV Listener Surveyand let us know what you’d like to hear in future episodes!

Interview: Pope Francis in Conversation with the Editors of European Jesuit Journals