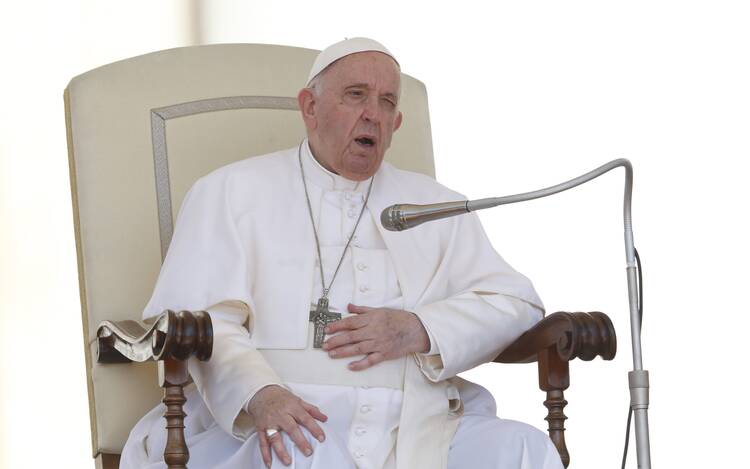 Pope Francis touches his knee during his general audience in St. Peter's Square at the Vatican in this June 1, 2022, file photo. (CNS photo/Paul Haring)

ROME (AP) — Pope Francis has complained that traditionalist Catholics, particularly in the United States, are “gagging” the church’s modernizing reforms and insisted that there was no turning back.

Francis told a gathering of Jesuit editors in comments published Tuesday that he was convinced that some Catholics simply have never accepted the Second Vatican Council, the meetings of the 1960s that led to Mass being celebrated in the vernacular rather than Latin and revolutionized the church’s relations with people of other faiths, among other things.

“The number of groups of ‘restorers’—for example, in the United States there are many—is significant,” Francis told the editors, according to excerpts published by the Jesuit journal La Civilta Cattolica.

“Restorationism has come to gag the council.”

“Restorationism has come to gag the council,” he said, adding that he knew some priests for whom the 16th century Council of Trent was more memorable than the 20th century Vatican II.

Traditionalists have become some of Francis’ fiercest critics, accusing him of heresy for his opening to divorced and civilly remarried Catholics, outreach to gay Catholics and other reforms. Francis has taken an increasingly hard line against them, re-imposing restrictions on celebrating the old Latin Mass and taking specific action in dioceses and religious orders where traditionalists have resisted his reforms.

Just last week, in a meeting with Sicilian clergy, Francis told the priests that it wasn’t always appropriate to use “grandma’s lace” in their vestments and to update their liturgical garb to be in touch with current times and follow in the spirit of Vatican II.

“It is also true that it takes a century for a council to take root. We still have forty years to make it take root, then!” he told the editors.

“It is also true that it takes a century for a council to take root. We still have forty years to make it take root, then!”

The pope also spoke with the editors of the Jesuit journals about resistance to the Society of Jesus’ response to Vatican II. “You were not yet born, but I witnessed in 1974 the ordeal of Father General Pedro Arrupe during the 32nd General Congregation,” Pope Francis said, referring to the Jesuits’ meeting that focused the order on social justice. “At that time there was a conservative reaction to block the prophetic voice of Arrupe,” the pope said.

He recounted how one Spanish Jesuit told him, “The happiest day of my life will be when I see them [Pedro Arrupe and Jean-Yves Calves, S.J., an expert in Marxism] hanging from the gallows in St. Peter’s Square.” The pope continued, “Why am I telling you this story? To make you understand what the post-conciliar period was like. This is happening again, especially with the traditionalists.”

At the end of the interview, the pope returned to the topic again, saying, “Sorry if I went on too long, but I wanted to underline the post-Council and Arrupe issues because the current problem of the church is precisely the non-acceptance of the Council.”

Listen to a discussion about this story on "Inside the Vatican":