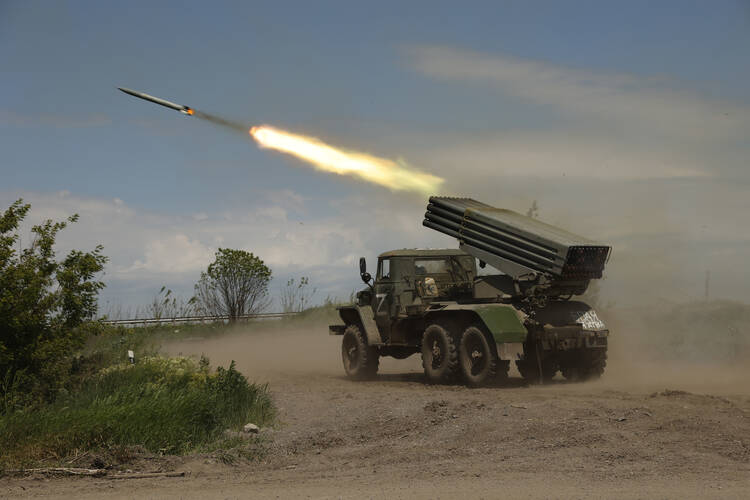 “The world is at war,” he said. “For me, today, World War III has been declared. This is something that should give us pause for thought. What is happening to humanity that we have had three world wars in a century?”

Francis spoke about the complex background to the war in Ukraine and the interests involved, including those of arms manufacturers. He denounced “the brutality and ferocity” of the Russian troops and praised the heroism and courage of the Ukrainians. At the same time, he said, “we do not see the whole drama behind the war, which was perhaps somehow either provoked or not prevented.”

“For me, today, World War III has been declared. This is something that should give us pause for thought. What is happening to humanity that we have had three world wars in a century?”

The pope has faced criticism for not calling out the Russian president by name and for suggesting that “perhaps” NATO may have provoked the war “by barking at the gates” of Russia. But in the new interview, the pope said he was quoting what one head of state had told him. Even so, Francis denied that he is “pro-Putin.”

“I am simply against reducing complexity to the distinction between good guys and bad guys without reasoning about roots and interests, which are complex,” he said. “While we see the ferocity, the cruelty of Russian troops, we must not forget real problems if we want them to be solved.”

A Jesuit editor from Eastern Europe noted that “we are living through a war of attrition and write about it in our journals,” and asked the pope: “What are your suggestions for communicating the situation in which we are living? How can we contribute to a peaceful future?”

“To answer this question, we have to move away from the normal pattern of ‘Little Red Riding Hood’: Little Red Riding Hood was good and the wolf was the bad guy,” Francis responded. “Here there are no metaphysical good guys and bad guys, in an abstract sense. Something global is emerging, with elements that are very much intertwined.”

“I am simply against reducing complexity to the distinction between good guys and bad guys without reasoning about roots and interests, which are complex,” the pope said.

Regarding his comments about NATO’s role in precipitating the war, the pope revealed: that “a couple of months before the war started, I met a head of state, a wise man, who speaks very little, very wise indeed. After we talked about the things he wanted to talk about, he told me that he was very concerned about the way NATO was moving.

“I asked him why, and he said: ‘They are barking at the gates of Russia. They do not understand that the Russians are imperialists and will allow no foreign power to approach them.’ He concluded, ‘The situation could lead to war.’ This was his opinion. On Feb. 24, the war began. That head of state was able to read the signs of what was taking place.”

Referring to the ongoing war, Francis said, “What we are seeing is the brutality and ferocity with which this war is being carried out by the troops, generally mercenaries, used by the Russians. The Russians prefer to send in Chechen and Syrian mercenaries.

“But the danger is that we only see this, which is monstrous, and we do not see the whole drama unfolding behind this war, which was perhaps somehow either provoked or not prevented,” he continued. “And note the interest in testing and selling weapons. It is very sad, but at the end of the day that is what is at stake.”

“The Russians thought it would all be over in a week. But they miscalculated. They encountered a brave people, a people who are struggling to survive and who have a history of struggle.”

“The Russians thought it would all be over in a week,” Pope Francis recalled. “But they miscalculated. They encountered a brave people, a people who are struggling to survive and who have a history of struggle.”

He went on to speak about the response in Europe and elsewhere to the terrible suffering of the 44 million people of Ukraine, over 25 percent of whom have been forced to leave their homes and become either internally displaced people or refugees. “Everyone opens their hearts to the refugees, the Ukrainian exiles, who are usually women and children.” the pope said. “The men are left to fight.”

He recalled that at the general audience in St. Peter’s Square the previous week, “two wives of Ukrainian soldiers who were in the Azovstal steelworks came to ask me to intercede for them to be saved. They are women with children whose husbands are fighting over there. Young, beautiful women.

“We are all very sensitive to these dramatic situations,” Francis said. “But I ask myself, what will happen when the enthusiasm to help passes? Because things are cooling down, and who will then take care of these women? We need to look beyond the concrete action of the moment, and see how we will support them so that they do not fall into trafficking, are not abused, because the vultures are already circling.”

“What will happen when the enthusiasm to help passes? Because things are cooling down, and who will then take care of these women?”

As history shows, he said, “Ukraine is an expert in suffering slavery and war. It is a rich country that has always been cut up, torn apart by the will of those who want to take it over and exploit it. It is as if history has predisposed Ukraine to be a heroic country. Seeing this heroism touches our hearts.”

He praised the heroism of the Ukrainians: “Brave women. Brave people. A people not afraid to fight. A people hardworking and at the same time proud of their land. We keep in mind the Ukrainian identity at this time. This is what moves us: to see such heroism.” But, he said, “what is before our eyes is a situation of world war, global interests, arms sales and geopolitical appropriation, which is martyring a heroic people.”

He reminded the European Jesuit editors that “our sensibility” is touched because Ukraine is close to us, and we see what is happening there, but he said there are also conflicts in other countries far away, such as in the Democratic Republic of the Congo, Nigeria and Myanmar, “and nobody cares.”

He recalled that some years ago he had said, “we are living the third world war piece by piece.” But now, he told the Jesuit editors, “the world is at war!”

“I would like your journals to deal with the human side of war,” the pope said. “I would like you to show the human drama of war. It is all very well to make a geopolitical calculation, to study things in depth. You must do so because that is your duty.

“I would like you to show the human drama of war. It is all very well to make a geopolitical calculation, to study things in depth.”

“Reflecting on this would help humanity and the church a great deal,” he continued. “Make your socio-political reflections, without, however, neglecting human reflection on war.”

Pope Francis also recalled that he had a 40-minute conversation with the Russian Patriarch Kirill on March 16. He revealed that in the first part of their virtual conversation, the patriarch “read me a declaration in which he gave reasons justifying the war.

“When he finished, I intervened and told him: ‘Brother, we are not clerics of the state, we are pastors of the people,’” Francis said. The pope recalled that he was scheduled to meet him again on June 14 in Jerusalem “to talk about our shared issues.” But given the war in Ukraine, he said, “by mutual agreement, we decided to postpone the meeting to a later date, so that our dialogue would not be misunderstood.” Francis said that he hopes to meet him at a general assembly of leaders of world religions in Kazakhstan in September. “I hope to be able to greet him and speak a little with him as a pastor,” he said.

On the same day the interview was published, June 14, Pope Francis went a step further in his analysis of Russia’s war against Ukraine on the 110th day of the war. He did so in his message for the sixth World Day of the Poor. After speaking about the coronavirus pandemic, he said that “a new catastrophe has appeared on the horizon, destined to impose on our world a very different scenario.

“The war in Ukraine has now been added to the regional wars that for years have taken a heavy toll of death and destruction. Yet here the situation is even more complex due to the direct intervention of a ‘superpower’ aimed at imposing its own will in violation of the principle of the self-determination of peoples.

“Tragic scenarios are being reenacted,” the pope said, “and once more reciprocal extortionate demands made by a few potentates are stifling the voice of a humanity that cries out for peace.”