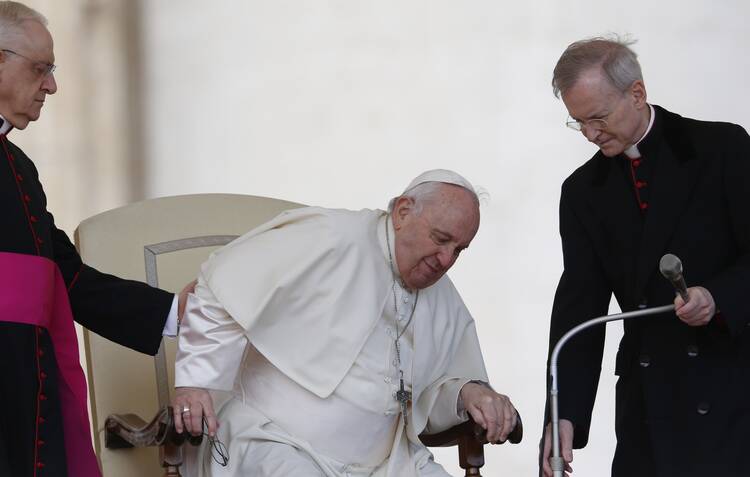 Pope Francis grimaces in pain as he gets up from his chair during the general audience in St. Peter's Square at the Vatican in this April 20, 2022, file photo. On his doctors' advice because of ongoing problems with his knee, the pope will not travel to Congo and South Sudan in early July, the Vatican announced June 10. (CNS photo/Paul Haring)

Pope Francis has postponed “with regret” his visit to the Democratic Republic of the Congo and South Sudan on the advice of his doctors so as “not to jeopardize the result of the therapy that he is undergoing,” the Vatican announced today. The much-awaited visit was scheduled for July 2 to 7.

The news was shared by the director of the Holy See Press Office, Matteo Bruni, in a statement on June 10.

While the news, coming just 22 days before his scheduled departure, surprised many people, it was nonetheless unsurprising given the pope’s great mobility problems, which were evident at the public audience earlier this week. Pope Francis, 85, has required the use of a wheelchair since May 5, when he began a new course of physical therapy that he has not yet completed. The Vatican has not shared many details about the therapy he is having, but Argentine Archbishop Victor Manuel Fernandez said in an interview that it included massage and physiotherapy; other sources said it involved injections and perhaps laser treatment. Many in the Vatican had privately questioned whether it was wise to embark on such a demanding trip to two countries in a wheelchair.

Pope Francis has postponed “with regret” his visit to the Democratic Republic of the Congo and to South Sudan on the advice of his doctors.

Almost exactly one month ago, on May 9, the Vatican announced that the pope had to postpone his visit to Lebanon scheduled for mid-June because of problems with his right knee. The announcement underlined that the visit was postponed, not canceled. The same is true of today’s visit. Francis, who has previously refused to have surgery for his ailment, hopes he will recover from his knee problem, which appears to be linked to torn ligaments, and be able to visit all three countries at a later date, perhaps even this year.

Francis has suffered from problems with his right knee and leg since the end of last year and had to cancel or redesign his participation at major liturgical ceremonies in the Vatican, including the Masses for the Easter Vigil and Pentecost Sunday. The pope assisted at both ceremonies, seated, because he was unable to preside at the Masses standing up. He did, however, deliver the homilies on both occasions.

On the visit to Africa, however, he was scheduled to preside at three open-air Masses—two in the Democratic Republic of the Congo and one in Juba, the capital of South Sudan—events that would appear to be too much for him in his present condition.

He has long wanted to visit the Democratic Republic of the Congo, the country with the largest Catholic population in Africa, and to visit South Sudan, together with the Archbishop of Canterbury and the Moderator of the Church of Scotland, to support the peace process in that country. The latter ecumenical visit has been high on his agenda for a long time.

The postponement, not cancellation, of this journey to Africa will likely spark even more speculation about resignation, but such speculation is without foundation. Francis’ problem is related to mobility, not to his ability to govern the church. Moreover, he has not given any indication in recent times that he is considering resignation. On the contrary, in an interview from Sept. 2021 with the Spanish Radio COPE, he said the idea of resignation had not entered his head following his operation in July of that year, even though there was much speculation in the media that he might soon vacate the chair of Peter.

Pope Francis is scheduled to visit Canada from July 24 to 30, as he promised the representatives of the country’s indigenous peoples at the end of March when he met them in the Vatican. The Vatican statement today made no reference to that visit. It is still on his agenda, but that, too, will depend on what his doctors advise closer to the date.