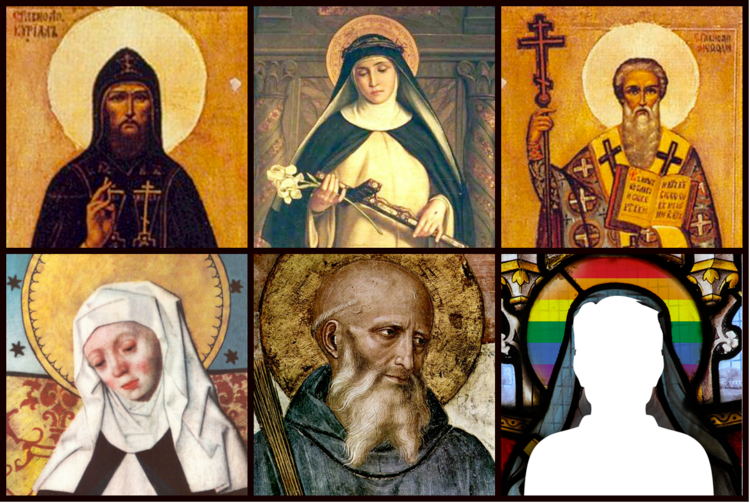 I love a great tableau of the saints—15, 20, 30 people surrounding Mary or Jesus and facing us, their heads framed by halos as yellow as the sun. It’s like getting to see the members of the Justice League or the X-Men all together. There’s that game of trying to see if you can recognize all of them, remember their backstories and superpowers. But for me, it is also reassuring to see them all gathered together. Particularly if they include more than just celibate white men, it feels like a glimpse of the kingdom of God, a home where there is a place for all of us.

But then a couple years ago, I was at the Cathedral of Our Lady of the Angels in Los Angeles, showing some friends the gorgeous tapestries of the saints that line the walls of the church. Created by the artist John Nava, they are just extraordinary—young people and old, Europeans, Africans, Asians, Latin Americans and Indigenous people, women and men all surrounding us and looking with us toward God.

When L.G.B.T. people look at the communion of the saints, we should be able to see someone who looks like us.

As I sat there in the church with my guests, looking up at all these beautiful images, it suddenly hit me that not a single one of these people has been identified as gay, lesbian, bisexual or transgender, though undoubtedly some of them were. In fact, the Catholic Church has yet to recognize a single L.G.B.T. saint.

Now, depending on how you were raised, just the fact that I am raising this as a problem might seem scandalous. Honestly, I instinctively feel that way myself, and I’m gay. No matter how much work Pope Francis, various bishops, clergy and others have done to try and normalize the place of L.G.B.T. people in the church, the fact is, for many Catholics of a certain age, being L.G.B.T. still seems wrong or disobedient. It’s right there in the way the church has often tried to talk about L.G.B.T. people: “Love the sinner, hate the sin.” Those who use this phrase argue that it makes clear that the problem with us is not our identities, but our acts and desires. But the line only identifies L.G.B.T. people as sinners. It teaches people to love us anyway. And when you hear that enough as an L.G.B.T. person, you start to believe the same.

So yes, in proposing that it’s a problem that there are no L.G.B.T. saints, I feel like I am saying something transgressive. But the fact is, as Catholics we believe that each of us is born in the image and likeness of God. Not just straight people, white people or men—everyone. There is no asterisk in the Catechism on this point. This is the teaching of the church, even if some Catholics discuss or treat us in ways that suggest otherwise.

As Catholics we believe that each of us is born in the image and likeness of God. Not just straight people, white people or men—everyone.

It is this truth of our faith, in fact, that allowed Francis to say, when asked a question about gay priests, “If a gay person is in eager search of God, who am I to judge them?” It is what has allowed him to praise the work of organizations like New Ways Ministry and people like Jeannine Gramick, S.L., and my colleague James Martin, S.J., all of whom have been ministering to L.G.B.T. Catholics, in Sister Gramick’s case for over 50 years; or to invite a group of transgender people to the Vatican to receive their Covid vaccine; or to restore the openly gay theologian Father James Alison to active ministry after two decades of what he described as a “Kafkaesque” nightmare in which he was not allowed to know what the charges against him were, could not make legal representation of his case and was not allowed any appeal. If we are children of God like everyone else, then we should be afforded the same care and respect that they are. “Know that God created you, God loves you and God is on your side,” Cardinal Joseph Tobin and 13 other U.S. archbishops and bishops wrote in a statement last December, speaking to L.G.B.T. youth.

But there is more to it than respect and love. To say that God created us or that we are made in God’s image is to say that we offer a glimpse of who God is, that we are each a means by which other people can know that they, too, are an image of God, seen and loved by Him. It’s an incredible statement, to think that any of us could be such a gift, a way by which others may come to know God and themselves better. And yet we believe that to be true of all human beings.

There are so many L.G.B.T. people who have dedicated their lives to being this kind of hope and consolation for others. Like the New York City fire chaplain and Franciscan priest Mychal Judge, who died on 9/11 while encouraging rescue workers in the lobby of the World Trade Center’s North Tower. In his life, Father Judge set up one of the first ministries in New York City to serve people with H.I.V. or AIDS. He advocated for the homeless and ministered to alcoholics after going through A.A. himself. And for the last 10 years of his life, he worked as chaplain for the New York City fire department. He was gay, he helped a lot of people, and they speak now of the ways he inspired them. And there is a growing call for his canonization.

Those of us who are L.G.B.T. and Catholic know only too well the hardship that comes with accepting ourselves, and the compassion that it teaches.

Or take the Dutch theologian Father Henri Nouwen. His spiritual writings have helped millions of people to connect with God. And after decades spent teaching at Yale and Harvard’s divinity schools, he dedicated the final part of his life to living and working with disabled adults in L’Arche communities. His life was a profound witness of service, simplicity and friendship.

Nouwen never publicly identified as gay; from his journals it is clear that his ongoing struggle to integrate his sexuality into his life was a difficult burden that he resolved only in his latter years. And yet it was also clearly an engine for his ministry, something that allowed him to speak to struggling people with insight and empathy.

Those of us who are L.G.B.T. and Catholic know only too well the hardship that comes with accepting ourselves, and the compassion that it teaches. Who better to be a saint than someone who has been down that path?

I hope it’s clear that I don’t think naming saints should be just about giving a community a saint “of our own.” Nouwen and Judge dedicated their lives to helping a wide range of people, and they have been acknowledged as holy by them. Their sanctity is a function not of their sexuality but of the gift they have been to the whole church.

At the same time, it is also worth saying it is rough being an L.G.B.T. Catholic. I’m sure some Catholics get tired of us wheeling out Pope Francis’ “Who am I to judge?” But for many of us, Francis’ statement was the first time in our lives that we had been afforded any sort of public permission to exist as ourselves in the church.

As we look at church history, we might reconsider the stories of St. Brigid and Sister Darlughdach, who resided together, worked together and shared a bed; of St. John Henry Newman and Father Ambrose St. John, who lived together for 32 years and shared a grave, or of the Venerable Juana Inés de la Cruz, who believed that God had changed her gender in the womb and imagined Jesus could be mother or father, wife or husband, depending on the needs of those who search for him. But our actual existence in the history of the church has never been acknowledged, nor have any blessings we might have brought. Nowhere will we find statues of people like us. We are included in no Catholic tableaux. At best, we are just guests in the story of salvation. More often we are like Abraham’s second wife, Hagar, exiled to some other land.

While the ways in which they might describe themselves in earlier eras would be different, L.G.B.T. people have been a part of the church from its beginnings. Some have contributed to its mission in inspiring and holy ways. And in many cases, like Nouwen, they did so while silently carrying a terrible burden. It is time they were allowed their place in the church’s story.

When L.G.B.T. people look at the communion of the saints, we should be able to see someone who looks like us. And it is not because of who we are, but because of who those individuals were and what they did.