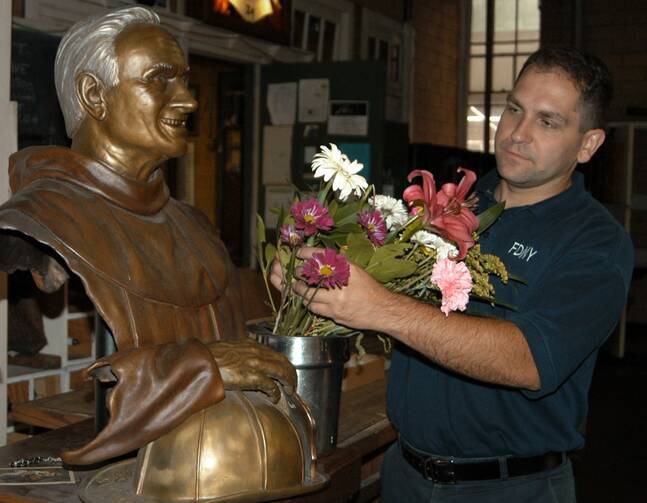 As a young Marist brother ministering in New York in the late 1980s, Salvatore Sapienza had been volunteering with secular H.I.V. and AIDS support organizations when an unusual illustration in the back pages of a gay weekly caught his eye: a depiction of St. Francis of Assisi, along with an appeal for volunteers to help with a new ministry for people living with H.I.V. and AIDS.

When he arrived at the Manhattan residence of the Franciscans, where the ministry was to be housed, he was greeted by Mychal Judge, O.F.M., dressed in his brown friar’s habit and sandals. The young Marist was immediately taken by the priest’s kindness.

Approaching the 20th anniversary of Father Judge’s death—he was the first recorded victim of the Sept. 11 terrorist attacks in New York—Mr. Sapienza, who left the Marists in 1992, warmly recalled working alongside Father Judge for the next few years as H.I.V. and AIDS wrought havoc on the city’s gay population.

“Four of us would minister to people with AIDS in the hospitals,” he recalled in an interview with America. “We would have a Wednesday night prayer group with people with AIDS and their caregivers. We had, in the closet there, a small pantry where people with AIDS could come and get canned goods and toiletries.”

A fixture in the firefighting community, Father Judge was also an advocate for the homeless and a well-regarded parish priest.

Father Judge is perhaps remembered most for his service as chaplain of the New York Fire Department, a post he held from 1992 until his death. A fixture in the firefighting community, Father Judge was also an advocate for the homeless and a well-regarded parish priest.

“Most of his life,” Christopher Keenan, O.F.M., another Franciscan, told New York magazine in 2001, “he lived with a great deal of stress about what he couldn’t respond to—the times he had to say no.”

For his part, Mr. Sapienza said he got to know Father Judge through the small AIDS ministry that the friar started in his residence.

The Franciscan AIDS ministry was not the first undertaken by Catholics in New York. At least two Catholic hospitals, St. Vincent’s and St. Clare’s, each had AIDS wards that welcomed volunteer chaplains. A young Jesuit priest, William Hart McNichols, held healing Masses for people with AIDS, and the gay and lesbian Catholic organization Dignity helped connect volunteers to people in need of support. But Father Judge’s involvement in the Franciscan ministry helped bring attention to the overwhelming need and to the hurt and anger gay New Yorkers felt toward some church leaders.

“At that time, there was a lot of conflict between the gay community and the Catholic Church,” Mr. Sapienza recalled. “So our work was challenging in the sense that oftentimes we would walk into a hospital room to visit with someone with AIDS, and we would be asked to leave.”

Father Judge’s involvement in the Franciscan ministry helped bring attention to the overwhelming need and to the hurt and anger gay New Yorkers felt toward some church leaders.

But Father Judge had a way of listening, he said, that made people ultimately feel loved and respected.

Though the demands on Father Judge’s time were immense, he empowered the younger volunteers to take charge at the AIDS ministry.

“The first time I led the Wednesday night group, I was so nervous, especially since Mychal wasn’t there,” Mr. Sapienza said. “We would sit around a circle in the dark and there would be a candle in the center. When we flipped on the lights at the end, there was Mychal, standing in the doorway. He didn’t want to be seen, but he was there. And that meant so much.”

Father Judge was involved with the Dignity and offered the group space to meet after they were exiled from Catholic parishes in the late 1980s. He was open about his own sexual orientaion with other gay Catholics, including those who helped with the AIDS ministry. In 1993, Father Judge marched in the city’s gay pride parade. Though Father Judge’s sexual orientation did not become more widely known until after his death, Mr. Sapienza said he believed it helped prompt him to take action around H.I.V. and AIDS.

Some argue passionately that Father Judge should be considered for sainthood, and a new initiative for his canonization will be launched in the coming days. Though Father Judge’s religious order has not embraced that cause, a priest based in Rome who helps the Vatican investigate possible candidates for canonization is urging his supporters not to give up the effort.

The son of Irish immigrants, Father Judge grew up in Brooklyn, and decided while still in his teens to join the Franciscan religious order andwas ordained as a priest in 1961. He battled alcoholism with the help of Alcoholics Anonymous and developed a passion for ministering to marginalized communities.

In 1986, after serving in localities across the Northeast, Father Judge became a pastor at St. Francis of Assisi Church in New York City.

Many of his admirers took heart in 2017 when Pope Francis proclaimed a new pathway to sainthood for those who sacrifice their lives for others.

After that announcement, the Rev. Luis Escalante, a priest who has investigated possible sainthood cases for the Vatican’s Congregation for Causes of Saints, began receiving testimonies supporting Father Judge’s canonization.

Those accounts depicted Father Judge as “the best icon” of humanity, Father Escalante told The Associated Press via email this week. But there was a hitch: The Franciscans—who would be expected to lead a sainthood campaign on behalf of someone from their order—declined to do so for Father Judge.

“We are very proud of our brother’s legacy and we have shared his story with many people,” Kevin Mullen, O.F.M., the leader of the Franciscans’ New York-based Holy Name Province, told A.P. via email, “We leave it to our brothers in the generations to come to inquire about sainthood.”

New Ways Ministry announced that it would begin a more formal effort to support Father Judge’s canonization cause.

Father Escalante hopes supporters persevere and form a viable organization that could pursue sainthood in the coming years. Such a group would be tasked with building a case that a miracle occurred through prayers to Father Judge.

“The negative decision of the Friars cannot be seen as a preclusion to going ahead with Fr. Judge’s cause,” Father Escalante wrote. “It’s just a challenge to American people.”

New Ways Ministry, an advocacy group that promotes the inclusion of L.G.B.T. people in the Catholic Church, announced in a press release on Sept. 9 that it would begin a more formal effort to support Father Judge’s canonization cause.

“The time has come for the Catholic Church to officially recognize Fr. Mychal Judge as a saint by canonizing him,” Francis DeBernardo, the group’s executive director, wrote in an essay that the organization said will be published on Sept. 11. Mr. DeBernardno said New Ways Ministry will begin laying the groundwork for an organization that can back Father Judge’s cause more formally.

“The work of such an association would require many hands,” Mr. DeBernardo continued, “and would most appropriately be done by a coalition of the varied and diverse people and groups whose lives Fr. Judge touched.”

Mr. Sapienza recalled a visit to his childhood Catholic elementary school in Queens, where Father Judge gave presentations to students about the suffering caused by AIDS and encouraged them to help. In response, the students created shoe boxes filled with toiletries that the AIDS ministry distributed from the Franciscan residence. So many donations came in, in fact, that Father Judge and Mr. Sapienza had to make another trip out to Queens to retrieve them all.

“That was always so special to me that he thought of my little parish that I grew up in and made that a part of our AIDS ministry,” he recalled.

“Mychal, to his credit, really kept at it. And he was able to, so beautifully, balance his spirituality and his sexuality. And in that sense, he was a huge inspiration to me.”

During the next few years, Mr. Sapienza became increasingly disillusioned with the Catholic Church over the treatment of gay people and frustrated when Catholic leaders, including New York’s Cardinal John O’Connor, undermined public health campaigns aimed at slowing the spread of H.I.V. through the promotion of condoms.

He eventually decided to leave his religious order—and turned to Father Judge for counsel.

“Mychal was gay, and I’m gay, and I kind of felt really pulled between the gay community and the Catholic community,” Mr. Sapienza said. “As a young man, I thought that I maybe could help bridge the two communities.”

He soon decided he would not be able to accomplish that goal and remained awed by Father Judge’s ability to live comfortably in the church as a gay man while respecting his vows of chastity.

“Mychal, to his credit, really kept at it. And he was able to, so beautifully, balance his spirituality and his sexuality. And in that sense, he was a huge inspiration to me,” he said.

Though he is no longer Catholic, Mr. Sapienza said he hopes the church will eventually canonize Father Judge.

“I think that would be very powerful for gay people of faith, gay Catholics especially, to be able to say, ‘The church is canonizing this person that I can relate to,’” he said.

But regardless of whether the canonization moves forward, he said, many people already believe that Father Judge is a saint.

“Many people already pray to Mychal,” he said. “People do view him as a saintly figure, even though he’s not recognized [as such] by the church.”

Correction: Due to an editing error, a previous version of this article referred to the Marists as the Society of Mary.

1
We all love Zillow browsing. But there’s a dark side to the real estate app.
John W. Miller
2
Why do so many Jesuits love Stephen Sondheim? His art was a costly vocation.
Jim McDermott
3
This band wrote a song in honor of Dorothy Day. Now their album could help make her a saint.
Renée Darline Roden
4
After racist comments, Catholic University replaces stolen icon depicting Black Mary and Jesus
Rhina Guidos - Catholic News Service
5
In a world darkened by pandemic and political strife, Advent brings signs of God’s presence
James Martin, S.J.