Pope Francis is making Bishop McElroy a cardinal—and the response from Catholic Twitter is depressing. 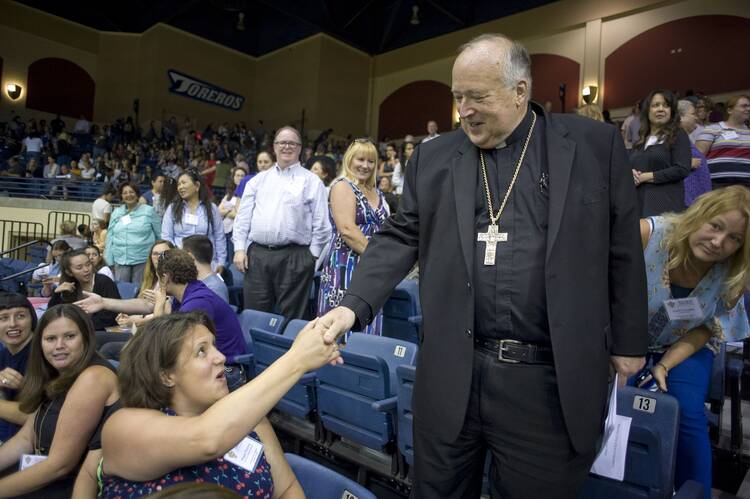 San Diego Bishop Robert W. McElroy greets an attendee during an Aug. 13, 2019, meeting with all of the more than 2,500 San Diego diocesan employees in response to Pope Francis' call to confront sexual abuse of minors and other vulnerable people.

Among the 21 churchmen nominated by Pope Francis for elevation to the College of Cardinals on May 30 was one American, Robert McElroy, bishop of the Diocese of San Diego.

Instead of a point of pride and hope among all U.S. Catholics, the announcement of Cardinal-designate McElroy’s impending elevation became just another opportunity for Catholic twitterati to have at it, many perceiving the news as the latest example of disunity and discord in the church—even as their conflicting reactions to the decision promoted the same.

Instead of a point of pride and hope among all U.S. Catholics, the announcement of Cardinal-designate McElroy’s impending elevation became just another opportunity for Catholic twitterati to have at it.

But it was all the same not a little depressing to see the many snarky denouncements that trailed the McElroy announcement. It is fair to acknowledge here that among those who approved of the decision were some who saw it as a vigorous ecclesial repudiation of U.S. bishops who have not exactly embraced Pope Francis’s pastoralist-first style. Some perceived a pointed rebuke of San Francisco Archbishop Salvatore Cordileone because of his recent decision to block House Speaker Nancy Pelosi from Communion.

But the Vatican simply does not move that quickly. The list of cardinal-designates for the next consistory was surely finalized weeks, even months ago.

Other critics charged that Bishop McElroy’s elevation is a sign of faltering energy on accountability and transparency in dealing with the clerical abuse crisis. They argued that the San Diego bishop had special responsibility for the McCarrick debacle because of information shared with him in a letter in 2016 from the late Richard Sipe, a well-known expert on the crisis and a resident of the diocese.

Discerning the gifts that the cardinal-designates bring to the church surely makes for a more wholesome exercise than squabbling over imagined deficiencies.

But Mr. McCarrick’s ascendancy within the church, of course, was set in motion under Popes John Paul II and Benedict, years before Cardinal-designate McElroy had a position of any authority in the U.S. church. And since most of the information and allegations included in the letter from the late Mr. Sipe had been posted online years earlier, by that standard the “blame” for the scandal of McCarrick must be shared with all contemporary church leaders and the Catholic press—probably the fairest assessment.

Cardinal-designate McElroy explained in 2018 that he passed on the information shared with him by Sipe to the responsible governing authorities in Rome. (We await still some evidence of progress on whatever process was then set in motion.) It is not clear how else a leader of a diocese not directly connected with the parties in question could have proceeded, something many of this week’s detractors should or do know. In his own diocese Cardinal-designate McElroy has taken a leadership role in opening diocesan archives and reaching out to survivors of abuse.

Finally, many critics went after Pope Francis directly with the bizarre accusation that he was gaming the system—“packing the court” was an American expression often used—by elevating someone like Cardinal-designate McElroy to the College of Cardinals. But it should hardly come as a surprise that Pope Francis would select candidates for the cardinalate that he perceives as most compatible with his vision for the church. Can’t the same be said of every pope?

Cardinal-designate McElroy has frequently expressed reservations about “weaponizing the Eucharist” as part of a U.S. culture war; Pope Francis and the Holy See have discouraged the practice as well, the pope himself noting that he has never denied Holy Communion to anyone. The San Diego bishop has called for the welcoming of L.G.B.T. Catholics, as has Pope Francis. The Diocese of San Diego hosted its own synod in 2016, years before Rome announced its own global “synod on synodality.”

Cardinal-designate McElroy has frequently expressed reservations about “weaponizing the Eucharist” as part of a U.S. culture war.

Cardinal-designate McElroy has shown a preferential option for pastoral approaches to discordant issues and has emphasized that while the church continues its witness on abortion and other life issues, it must remain at the forefront on the other critical issues of our times, including climate change, immigration, economic and ecological justice, and combating racism. This is precisely the episcopal posture long endorsed by Pope Francis.

Of course the primary error made by the too-eager critics of the bishop’s elevation remains an insistence on perceiving such ecclesial moments through an exclusively American filter. Cardinal-designate McElroy is the only candidate from the United States out of nearly two dozen other elevations to the College of Cardinals.

Among them is the cardinal-designate from Hyderabad, India, Archbishop Anthony Poola. “I am a Dalit,” Archbishop Poola said after learning of his elevation, or a member of a caste that is much discriminated against in India. “This is good news for Dalit Catholics and for the entire church in India,” he said. “I believe it will bring the encouragement of Pope Francis to many.”

Archbishop Leonardo Ulrich Steiner, O.F.M., of Manaus, Brazil, was also among those nominated for elevation. His community is at a geopolitical focal point of the converging issues of human migration and care of creation.

Other cardinals-designate come from East Timor, Mongolia, Nigeria and other sites of the church at its so-called peripheries, continuing a pointed effort by Pope Francis to create a college that not only fully represents the church but which will benefit from the diversity of perspective such appointments offer.

Discerning the gifts that the cardinals-designate bring to the church surely makes for a more wholesome exercise than squabbling over imagined deficiencies. Pope Francis believes that it is from the peripheries where the great humanitarian, ecological and economic challenges of our times are playing out that the greatest wisdom can be found. Perhaps that wisdom will be easier to discern when we step away from the keyboard, take a breath and listen.