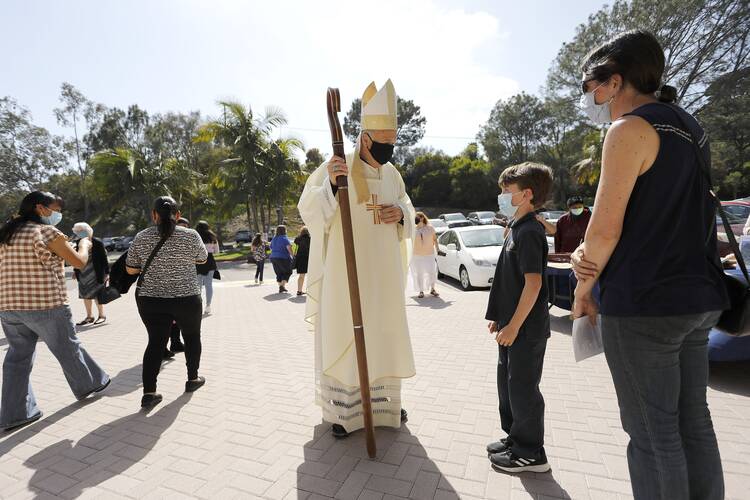 Bishop Robert McElroy said he had “not a clue” that he would be named to the College of Cardinals by Pope Francis earlier this week, which is why he was initially confused when his phone sprang to life in the early hours of Sunday morning. Congratulatory texts poured in from friends and family, the news having been announced at noon Rome time—or 3 in the morning in San Diego.

Once awake, he learned the pope had included him on a list of 21 soon-to-be elevated cardinals, so he got to work returning emails and phone calls and drafting a statement, before heading out to a parish confirmation later that morning. That sums up how he envisions his new status in the church, perhaps more responsibilities on his plate but ultimately, a bishop leading a local church.

At a press conference on Tuesday afternoon, Bishop McElroy said he believes the pope selected him because he wanted a cardinal on the West Coast and because of his support for some of the pope’s pastoral and ecclesial priorities. (Once he is made a cardinal on Aug. 27 at a ceremony in Rome, Bishop McElroy will be the sole cardinal in California, aside from the 86-year-old former archbishop of Los Angeles, Cardinal Roger Mahony, who because of age is ineligible to vote in the next papal conclave.)

Bishop Robert McElroy said he had “not a clue” that he would be named to the College of Cardinals by Pope Francis earlier this week.

The appointment of a bishop to the College of Cardinals over two California archbishops raised some eyebrows. But Archbishop José Gomez, who heads the Archdiocese of Los Angeles, and Archbishop Salvatore Cordileone of San Francisco, are not perceived to be as closely aligned to Pope Francis as Bishop McElroy, who acknowledged as much on Tuesday.

“Pope Francis has a series of initiatives that he’s trying to bring to the life of the church,” he said, “and I have tried to take those initiatives and plant them here.”

Bishop McElroy cited his work to promote the pope’s environmental justice vision outlined in his 2015 encyclical, “Laudato Si’,” and his own efforts to support the pope’s vision for a more synodal church, one that is characterized by “a more pastoral orientation rather than a strict doctrinal orientation within the life of the church,” as he put it.

The appointment of a bishop to the College of Cardinals over two California archbishops raised some eyebrows.

Bishop McElroy said he and the pope share a view that the church should focus on “more inclusion” and “outreach to people who have been alienated from the church in the past.”

Earlier this month, Archbishop Cordileone announced that he would ban Speaker Nancy Pelosi from receiving Communion because of her support for abortion rights. When asked by a reporter about his views on the Eucharist and political leaders, Bishop McElroy said he wrote his first article discouraging banning politicians from Communion in 2004, during the presidential campaign of John Kerry, and more recently in an article in America.

“It is destructive, in my view, to prohibit political leaders from receiving Communion based on their actions on public policy,” he said.

Such bans diminish the Eucharist, contribute toward the weaponization of the sacraments “and even more so [contribute] to increased partisanship within our society,” he said.

“It is destructive, in my view, to prohibit political leaders from receiving Communion based on their actions on public policy,” Bishop McElroy said.

“We sadly live in a society which is deeply divided along partisan and ideological lines, and we see some of that seeping into the life of the church,” he said, calling it “a great tragedy.”

“So I think it's important that we not go in that direction,” he said.

Bishop McElroy is 68, which means he will rank on the younger side of the roughly 117 men eligible to vote for the next pope. A priest and former auxiliary bishop of San Francisco, Bishop McElroy was appointed to lead the Diocese of San Diego in 2015. At Tuesday’s press conference, he addressed recent health challenges, including a quadruple bypass surgery he undertook last year. He said he had no complications and no pain and that he is back to normal. As for his Italian, he said it is rusty, though he speaks it well enough to get by during his visits to Rome.

Bishop McElroy said his day-to-day responsibilities would remain stable and that he was “particularly pleased” he was staying put in San Diego, where he will be that diocese’s first bishop to be made a cardinal. Passing on the faith to young people remains “critical” and the church’s “highest priority,” he said, which requires the church “to forge and find new methods” to reach them.

“We sadly live in a society which is deeply divided along partisan and ideological lines, and we see some of that seeping into the life of the church,” he said, calling it “a great tragedy.”

Additionally, he said that the church must not forget the lessons learned from revelations of clergy sexual abuse and said that the global nature of the church might mean looking to other regions of the world to deal with pressing issues like the clergy shortage.

He noted that as a participant in the 2019 Synod on “New Paths for the Church and for an Integral Ecology,” he heard many participants state that a married priesthood would benefit the church.

“Can there be change on this issue?” he said Tuesday of married priests. “Yes, there can be change.”

Bishop McElroy noted that the primary duty of a cardinal is to elect a new pope and while cardinal-electors rarely divulge their preferences for who they would like to see sit in Peter’s throne, he made at least one thing clear.

“That won’t happen,” he said when asked by a reporter if he had thought about the possibility of his one day being elected pope.

“I don’t think an American should be pope,” he said, stating that the United States already wields enough influence in the church and world. “I would oppose any American being elected pope.”