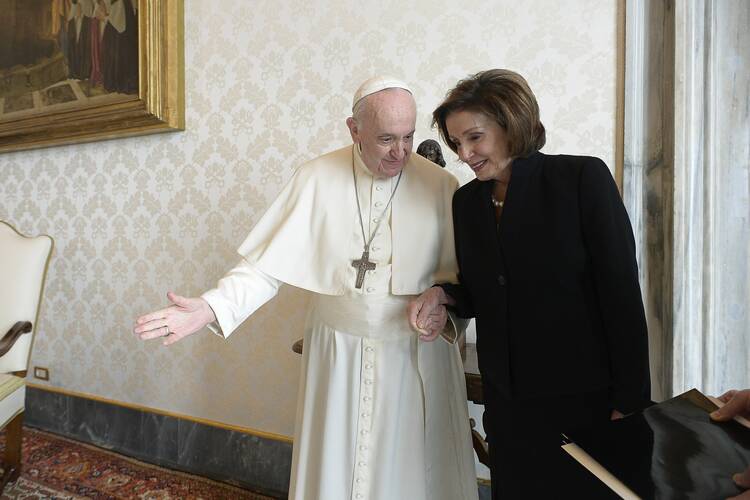 Archbishop Salvatore Cordileone of San Francisco announced Friday, May 20, he would bar Nancy Pelosi, the speaker of the U.S. House of Representatives, from receiving Holy Communion in his diocese, which is also Ms. Pelosi’s home diocese.

The archbishop’s decision comes after a lengthy and polarized debate over the past two years among U.S. bishops over whether to mandate a blanket ban on pro-choice politicians receiving communion. Ultimately, and after direct intervention from the Vatican, the U.S. bishops decided not to pursue a joint pastoral teaching on the matter. The decision to deny communion would remain with each individual bishop.

On “Inside the Vatican” this week, host Colleen Dulle asks Gerard O’Connell, America Vatican correspondent, how Archbishop Cordileone’s statement has been received at the Vatican and whether the Vatican would intervene given some in Rome had previously expressed reservations about polarization resulting from the U.S. bishops’ debate.

“There was much relief when at the November meeting of the bishops’ conference in the United States, the bishops found an off-ramp, a way of getting out of the polarization within the conference, on this question,” Gerry says. “And now they see, they find it distressing that it is back in a position which could even produce more polarization in the church.”

Gerry recalls the gist of the letter Cardinal Luis Ladaria, the prefect for the Vatican’s office on doctrine and discipline, sent last year to Archbishop José Gomez, who is the president of the U.S. bishops’ conference, advising brother bishops in the U.S. on how to proceed in their deliberations in what has become known as the “Communion wars.” The letter, “advised against taking steps, without real reflection,” Gerry says, without trying to reach consensus among themselves and stating very clearly they should try to preserve the unity in the church.”

Despite Cardinal Ladaria’s instruction that the U.S. bishops ought to consult with other bishops’ conferences around the world on the question of pro-choice politicians receiving communion, “Archbishop Cordileone has decided to go it alone,” Gerry says, which has alarmed the Vatican officials he has spoken with.

Colleen also points out Archbishop Cordileone’s selective use of “appeals to authority” in his announcement barring Ms. Pelosi from receiving the Eucharist and how he appears to cite more the teachings of John Paul II and Benedict XVI, when he was still Cardinal Ratzinger, the head of the Congregation for the Doctrine of the Faith, than he does Pope Francis and Cardinal Ladaria, the present leader of the Vatican’s doctrine office. Gerry notes that Archbishop Cordileone’s letter does not mention Cardinal Ladaria’s letter which was issued “in relation specifically to this present discussion, in May 2021,” he says. “He doesn't even mention it. So it's a very selective use of sources to justify a position.”

While Vatican officials have not yet commented publicly on Archbishop Cordileone’s decision, some U.S. bishops have come out in support of the ban. Colleen and Gerry discuss why the Vatican and other bishops are likely to remain silent if they disagree. “It seems that Cordileone’s approach here reveals a kind of a disunity or willingness to step out of line with the other bishops, whereas the other bishops’ silence reveals an attempt to keep unity or not draw attention to the disunity,” Colleen says.

In the latter part of the show, we look into a change Pope Francis made to canon law which would open leadership positions in priestly religious orders to members who are lay brothers, not priests. We talk about what effects this could have for men’s religious orders going forward .

More: Inside the Vatican / Pope Francis / US Church / US Politics / Bishops