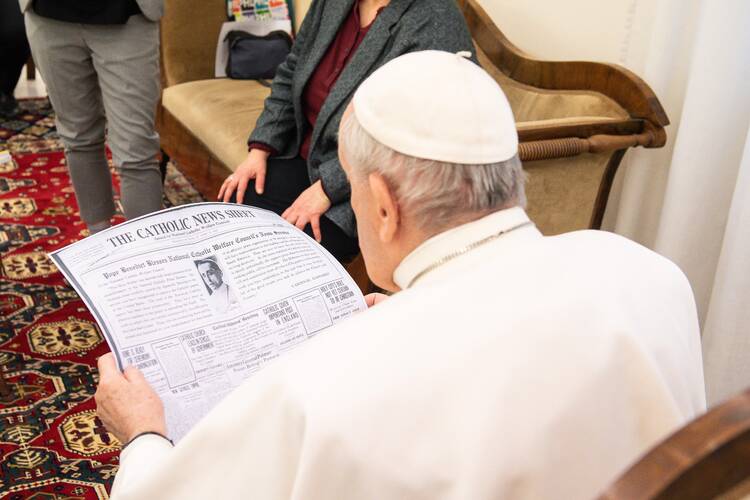 Pope Francis looks at a copy of the April 11, 1920, edition of the "Catholic News Sheet," during a meeting with members of the Catholic News Service Rome bureau at the Vatican Feb. 1, 2021. The special audience was in recognition of the 100th anniversary of CNS. (CNS photo/Vatican Media)

With the decision by the U.S. Conference of Catholic Bishops to close the U.S. bureaus of Catholic News Service later this year, editors and other journalists at Catholic newspapers throughout the United States worry that coverage of the church will suffer.

Ms. Hargett predicted that “there’s going to be a big gap in what our parishioners are going to know about what’s going on in the U.S. and throughout North America.” Secular newspapers have shed religion coverage in recent years, and Ms. Hargett said Catholics cannot depend on them for robust coverage of the church.

Earlier this month, the U.S.C.C.B. announced that it would shutter the New York and Washington bureaus of CNS amid a restructuring of its communications office. Twenty-one employees will be laid off, the conference said. The news agency’s Rome bureau will remain open, and its content will be available to subscribers without cost beginning next year.

Earlier this month, the U.S.C.C.B. announced that it would shutter the New York and Washington bureaus of CNS amid a restructuring of its communications office.

In a memo to subscribers on May 9, James Rogers, the chief communications officer for the U.S.C.C.B., said the “painful decision” to close much of CNS was made because of the “changing media landscape and a need to prioritize available resources.”

Tom Dermody, the editor of Peoria’s Catholic Post, wrote in an email to America that a lack of information as to how the U.S.C.C.B. plans to fill the impending content void adds uncertainty to an already stressful publishing environment.

“It is difficult to imagine no longer having the good work produced by its domestic operations as a foundation for what we do to keep our readers inspired and informed, especially about all that is happening in the church beyond our diocese’s borders,” Mr. Dermody said of CNS. “And not knowing what the U.S.C.C.B. is planning to offer to fill the void in a reorganized communications department adds to the concern of many of us.”

Catholic News Service, created in 1920, was in the past financially self-sustainable, funded through the sale of subscriptions to diocesan newspapers and other Catholic publications, including America. Many diocesan newspapers have shuttered in recent years—including Seattle’s in 2013, Akron’s in 2015 and Detroit’s in 2018—meaning less subscription revenue for CNS.

“It is difficult to imagine no longer having the good work produced by its domestic operations as a foundation for what we do to keep our readers inspired and informed.”

In 2017, CNS avoided layoffs as part of a restructuring of the U.S.C.C.B.’s communications department, in part because of its “tremendous content creation capacity,” as Mr. Rogers said at the time. “It’s a well-respected, well-known brand.”

Catholic media is not alone when it comes to financial challenges and the shuttering of historic newspapers.

A report from Poynter found that more than 100 local newspapers shut down in 2020 and 2021, including Pittsburgh’s Catholic newspaper. During that period, the Catholic newspapers in Buffalo, N.Y., Kansas City, Mo., and Newark, N.J., each discontinued their print operations.

One organization that could benefit from the downsizing of CNS is Catholic News Agency, a news service founded in 2004 and which since 2014 has been affiliated with the EWTN television network. Unlike CNS, CNA makes its content available for free. EWTN has been criticized for being too ideological in its reporting and analysis and for regularly inviting guests on who are opposed to Pope Francis’ vision for the church.

“Without Catholic News Service’s Washington and New York staffs, diocesan news outlets risk being left without a source of national and international Catholic news that is well reported and isn’t ideologically driven.”

“Without Catholic News Service’s Washington and New York staffs, diocesan news outlets risk being left without a source of national and international Catholic news that is well reported and isn’t ideologically driven,” Teak Phillips, the editor of St. Louis Review, told America. “I routinely hear from readers that they value coverage of the universal church. Those stories will now be harder to tell.”

An editorial from the Catholic publication Our Sunday Visitor, published on May 6, warned that the closure of CNS “has created a worrisome and potentially dangerous vacuum” and lamented that “sadly, other media that have a particular agenda or ideology are seen as more attractive to like-minded members of the faithful (and even of the clergy).”

Writing at The National Catholic Reporter, David Gibson, a veteran journalist and head of Fordham University’s Center on Religion and Culture, warned that closing the domestic operations of CNS “cedes the field to amateur and ideologically driven voices at a time when disinformation and division are threats not only to Catholicism but to our democratic institutions.”

Mr. Gibson said that the loss of CNS will create a news vacuum for church coverage, which will likely be filled by partisan and ideological writing masquerading as journalism—a reality that will ultimately harm the church.

A handful of editors and publishers of Catholic newspapers told America they will not use CNA content to replace CNS stories because of its perceived ideological lens.

“No editing, no accountability, no professionalism adds up to no credibility,” he wrote. “And that is what the Catholic bishops, whose reservoir of credibility was already down to the fumes, are sacrificing when they dismantle a professional news outlet like CNS.”

A handful of editors and publishers of Catholic newspapers told America they will not use CNA content to replace CNS stories because of its perceived ideological lens.

“In Burlington, we don’t want anything to do with CNA because of its affiliation with EWTN and the anti-Francis rhetoric on the network,” Bishop Christopher Coyne told America. He said the diocese’s magazine, Vermont Catholic, will not run CNA articles in the future. He also wonders how long CNA will remain free once CNS ceases coverage of the U.S. church.

Others cited a concern that because CNA is supported by EWTN rather than by paying clients, the agency is not accountable to editors who would point out biases in its coverage.

“I just want to do my part to point out the value of CNS, not just in our roles as Catholic journalists but to an informed, educated church.”

For example, CNA was among the handful of outlets, including the controversial online publication LifeSite News, that originally published the full text of German Cardinal Gerhard Müller’s “manifesto of faith,” which LifeSite called “a quasi correction of Pope Francis’ pontificate.” The cardinal’s manifesto argued that divorced and remarried Catholics could not receive Communion, despite Pope Francis allowing for pastoral accommodations in some cases in “Amoris Laetitia,” and warned that “to keep silent about these and the other truths of the Faith…is the fraud of Antichrist.”

Catholic News Service, on the other hand, ran a balanced article on the manifesto that included criticism of it by another German cardinal, Walter Kasper.

At the same time, some editors of Catholic publications said they are hesitant to use secular wire services, such as the Associated Press, because their stories are not geared specifically to a Catholic audience.

Some dioceses that shut down their newspapers launched a glossy magazine instead, often partnering with a nonprofit organization called Faith Catholic, which publishes magazines for more than 60 Catholic dioceses and organizations, including Long Island Catholic, East Tennessee Catholic and NC Catholics, according to its website.

“I hope the U.S.C.C.B. is aware that this move is subtracting a lot more than a figure on the expense side of a ledger.”

The company, founded in 2000 as the Catholic magazine for the Diocese of Lansing, Mich., expanded to serve other dioceses in 2003. Six years later, it merged with a Catholic publishing company to form Faith Catholic. On its website, the organization takes on diocesan newspapers, stating that a survey it conducted found readers responded more positively to their magazines than traditional newspapers. At least one staff member of Faith Catholic, Elizabeth Solsburg, is listed as a consultant for the U.S.C.C.B. communications committee.

While CNS was created as a journalistic enterprise, with editorial independence from the U.S. bishops’ conference, Faith Catholic describes itself as “a full-service integrated marketing and digital services company” that is “committed to proclaiming faithfully the Gospel of Jesus Christ, in fidelity to the magisterium of the Catholic Church.”

Some editors and journalists are hoping that by appealing to bishops through a letter-writing campaign, they can raise awareness about the value of CNS and convince them to change their minds about the closure. Still, the days appear numbered for CNS: A memo to subscribers said that some sections are already shutting down.

“I know how dwindling resources can necessitate change,” Mr. Dermody of Peoria’s Catholic paper said. “We had to decrease frequency and cut staff at The Catholic Post 12 years ago. I just want to do my part to point out the value of CNS, not just in our roles as Catholic journalists but to an informed, educated church. I hope the U.S.C.C.B. is aware that this move is subtracting a lot more than a figure on the expense side of a ledger.”

Colleen Dulle contributed to this report.