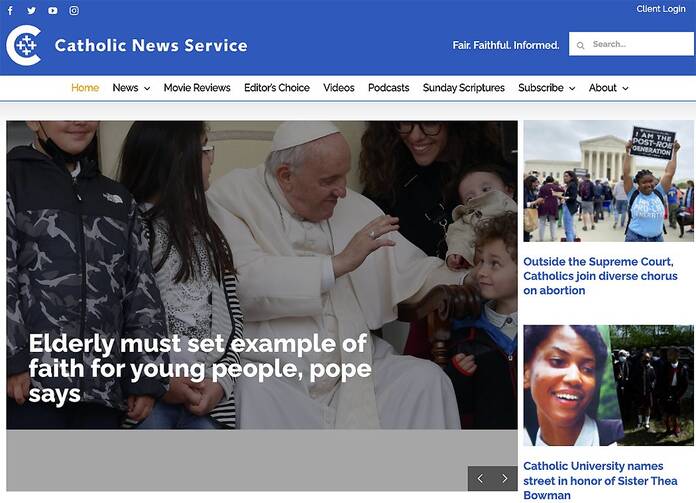 WASHINGTON (CNS) -- The U.S. Conference of Catholic Bishops announced to staff May 4 a dramatic reorganization of its communications department, including the closure of the Washington and New York offices of Catholic News Service.

In meetings with newsroom staff, James Rogers, the chief communications officer of the conference, said that the Washington office would be closed at year’s end.

The Rome bureau of Catholic News Service will remain open and continue to report on Vatican and related international events.

A statement released by the bishops’ public affairs office said: “Over the next few months, the USCCB Department of Communications will undertake a significant realignment to better utilize the resources entrusted to the Conference by the faithful in a manner that fits the communications environment today.

The U.S. Conference of Catholic Bishops announced to staff May 4 a dramatic reorganization of its communications department, including the closure of the Washington and New York offices of Catholic News Service.

“Sadly, this will impact a number of staff. We are grateful for the time and dedication of the committed team of communicators at the Conference who serve the Church; job transitions can be difficult, and as this is a personnel matter, further detail will not be discussed at this time.”

The statement continued: “Catholic News Service offices in New York and Washington will be closed at the end of the year, as will the USCCB Publishing Office. These changes, although painful, will allow the remaining functions -- including the Catholic News Service Rome Bureau and the Office of Public Affairs -- a more sustainable foundation upon which to do their work.”

Effective Jan. 1, 2023, Catholic News Service will cease to charge clients for its coverage. It will make its Rome coverage available to all U.S. dioceses at no charge starting in 2023.

Greg Erlandson, director and editor-in-chief of Catholic News Service, said he was “profoundly saddened by this decision.”

Greg Erlandson, director and editor-in-chief of Catholic News Service, said he was “profoundly saddened by this decision.”

“For more than a century, Catholic News Service has served the local, national and international Catholic press. I am proud of the professionalism of our staff of editors, journalists and photographers and of all that they have accomplished.”

A total of 21 employees will be laid off.

Catholic New Service was founded in 1920. In a meeting with Rome bureau staff in 2021, Pope Francis told them that “over these past hundred years, Catholic News Service has provided an invaluable contribution to the English-speaking world through its coverage of the church’s mission of proclaiming the Gospel and witnessing to the love of God revealed in Jesus Christ.”

The news service currently serves a majority of U.S. dioceses as well as national and international media operations.

USCCB Publishing, which holds the rights to the Catechism of the Catholic Church, the U.S. Adult Catechism and many other books, will cease its publishing operations at the end of 2022.