Funeral Mass homily for Father Drew Christiansen: a Jesuit who knew nothing is impossible with God 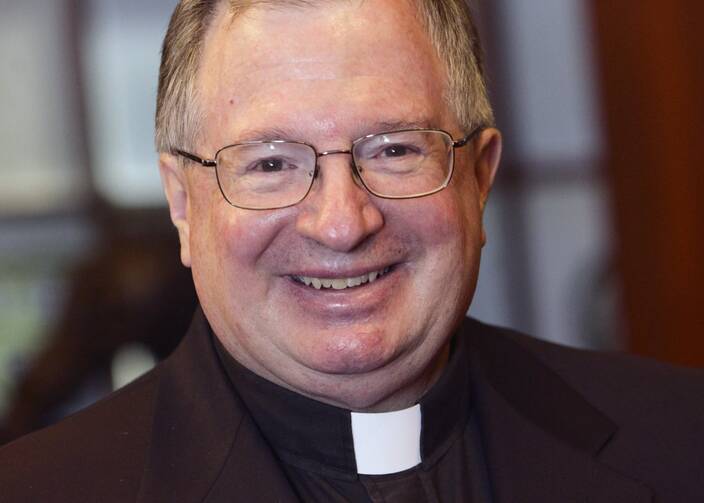 This Funeral Mass homily was delivered by James Martin, S.J., at Holy Trinity Church in Washington, D.C., on April 20, 2022.

Just outside Jerusalem, about two miles away, is a town in Palestinian territory called El Azariya. You used to be able to walk directly from the Old City of Jerusalem down into the Kidron Valley, through the Garden of Gethsemane, up the Mount of Olives, to El Azariya. But the wall that now separates Israeli settlements from Palestinian territory means that you must take a bus to get there, a ride of about half an hour. But it’s worth the trip. Because in Jesus’ time, El Azariya was called Bethany, where today’s Gospel took place (Jn 11:17-27).

In fact, I would know nothing about El Azariya if it weren’t for Drew, who, when I told him I was planning to write a book on Jesus, said, “You have to go to the Holy Land. You can’t write about Jesus without going there.” I resisted, but like a confident teacher schooling a slow student, he said very firmly, “No, you really have to go.” So I went.

Drew Christiansen, S.J., had a deep and abiding love for almost everything about the Holy Land: its peoples, its religions, its cultures.

Drew couldn’t wait to hear about the trip when I came back. He could get very excited, almost giddy, when talking about something he was interested in, words spilling out of his mouth all at once. “What did you think of the Church of the Holy Sepulchre? Did you visit Ein Kerem? Did you see David’s Tomb? Did you visit Capernaum?”

At one point, he said in hushed tones, “Did you venerate the steps behind the Church of St. Peter in Gallicantu?” That church is built on the site where, by tradition, Peter denied Jesus, and it was one of Drew’s favorite places in all the Holy Land. “There’s a staircase there?” I said. “I didn’t notice it.” “Oh no!” he said, covering his head with his hands. “Those are stairs that Jesus and his disciples almost certainly used when they went back and forth from Bethany to Jerusalem. I can’t believe you missed that!” Then he smiled and said, “Well, you’ll see them when you go back.”

But Drew’s passion for places like that did not stem simply from an academic interest. It came from something deeper. The same held true for his lifelong interest in Judaism, in Jewish-Christian relations, in Palestinian Christians, in peace-making, in nuclear disarmament, in international diplomacy and in social justice. These were not simply academic interests, political interests or even ecclesial interests. Even Drew’s deep love of the natural world was not simply an aesthetic love; that too went deeper. All these interests, all these enthusiasms, all these passions sprang from his relationship with a person, Jesus Christ.

All his interests, all his enthusiasms, all his passions sprang from Drew’s relationship with a person, Jesus Christ.

In the Gospel that Drew chose for his funeral Mass, which is just part of the story of the Raising of Lazarus, Martha and Mary have sent word to Jesus that their brother is ill.

At this point, Jesus and his disciples are across the Jordan River, having just been threatened with stoning. But after hearing about his friend Lazarus’s illness, Jesus waits two days. It is a mysterious decision, probably stemming from Jesus’ desire to ensure that people knew Lazarus was dead. Some Jewish people at the time believed that the soul hovered around the body for a few days. So by waiting, Jesus might have been ensuring that there would be no mistake about what he was doing, as in the Raising of Jairus’s daughter, when people mocked him and said, “She’s only asleep.” No, as he says to his disciples, Lazarus is dead.

So Martha and Mary are probably disappointed, annoyed, even angry, when he comes. “If you had been here, our brother would not have died,” they both say. Now, you can take this as a profession of faith, as an indication of frustration, or both. And you can take Martha’s words, “I know that my brother will rise again on the last day” either as an endorsement of Jesus’ power, or as an incomplete insight. Because this may be seen as Martha telling Jesus what is possible. And in John’s Gospel, when someone says, “I know,” they often don’t know. So Jesus ups the ante. “Yes, people will rise on the last day, but not just then, because I am the Resurrection and the Life. And I am here and with me all things are possible.”

It was faith in this Jesus, with whom everything is possible, that lay at the heart of Drew’s life. I didn’t know him as well as some, including obviously his family. But I knew him well, having lived and worked with him for many years. And the Drew I knew—scholarly, talkative, passionate, thoughtful, quirky, brilliant, prayerful, articulate, cheerful, kind—was also limited in later years by various health problems.

It was faith in this Jesus, with whom everything is possible, that lay at the heart of Drew’s life.

In a way, Drew was always hearing Jesus call him to new life, in the same way that Lazarus heard Jesus’ voice call him from the tomb, saying, “Come forth.” To respond to Jesus’s call, Drew left behind not only worries over physical limitations, but other things that might have hindered him.

It would have been easy for him to get discouraged and not listen to Jesus’ voice because of the challenges that he was asked to face in other areas. Drew took over America magazine, for example, at probably the lowest moment in its long history: a painful moment for America, for the American Jesuits and for the Society of Jesus at large. It may have been one of the most difficult tasks ever given to a U.S. Jesuit. And Drew, a brilliant writer and expert diplomat, but more an academic than a manager, said yes to that mission. He could easily have stayed behind, in the tomb as it were, and said, “No, that’s an impossible task.” But he listened to Jesus’ voice saying, “Come forth.”

His willingness to tackle seemingly impossible things did not end with his work at America. Think of his other abiding work: peacemaking. That is an almost insurmountable task these days, thankless in many ways. “Executive Director of the Office of International Justice and Peace” was the office he held at the U.S. bishops’ conference. “Justice and peace” are hard enough, but then add “international” to it—seemingly impossible. And then think about his work with Israeli-Palestinian relations, or his work with relations between the Holy See and Israel, all sometimes seemingly impossible tasks. It would have been easy for Drew to say, “No, those things are a fool’s errand.” Or, “I’m sorry, I just teach.” It would have been easy for him to stay in the tomb, to not listen to Jesus’ voice, and say, “That’s impossible.”

At the final moment of Drew’s life, as he closed his eyes, he heard Jesus call him once again, saying, “Come forth,” again promising him that nothing was impossible with God.

But unlike Martha and Mary, Drew knew the end of this Gospel story. He knew that Jesus called Lazarus from the grave by saying “Come forth.” He knew that on that day in Bethany, that nothing would ever be the same. And he knew that nothing is impossible with faith in Jesus. So he continued, in his own quiet way. Always, like Lazarus, hearing the call, believing that the New Jerusalem was possible.

You can still visit Lazarus’s Tomb in El Azariya today. It is underneath a mosque, and the key to the doorway is held by a Muslim shopkeeper, whom Drew knew. You descend a slippery staircase before you reach the stone tomb. In Jesus’ day, it may have been closer to ground level. But still, think of how hard it would have been for Lazarus to hear Jesus behind all that stone. Lazarus had to first hear that voice, to listen to it and then respond to it. Most of all, he had to believe that nothing is impossible with God.

Drew Christiansen didn’t wear his heart, or his faith, on his sleeve. Other than in homilies, he wouldn’t speak often about his relationship with Jesus. He could talk a blue streak about the New Testament and Catholic social teaching and various Vatican documents, but his faith was essentially private. But he didn’t have to talk about it. Everything he did expressed his faith in Jesus, the Resurrection and the Life. That was what enabled him to do all he did, even with his physical limitations and even in the face of the seeming impossibilities of the missions he was given.

Then, just two weeks ago, Drew’s body finally gave out in Georgetown, like Lazarus’s body did in El Azariya. But his relationship to Jesus did not end. As the story of Lazarus tells us, as the story of Easter tells us, something like death cannot stop God.

Because at the final moment of Drew’s life, as he closed his eyes, he heard Jesus call him once again, saying, “Come forth,” again promising him that nothing was impossible with God, asking him to take a step forward, to enter into what God had promised him since the beginning of time: the New Jerusalem.

The cemetery in Georgetown where Father Drew Christiansen was laid to rest. (Photo by author)