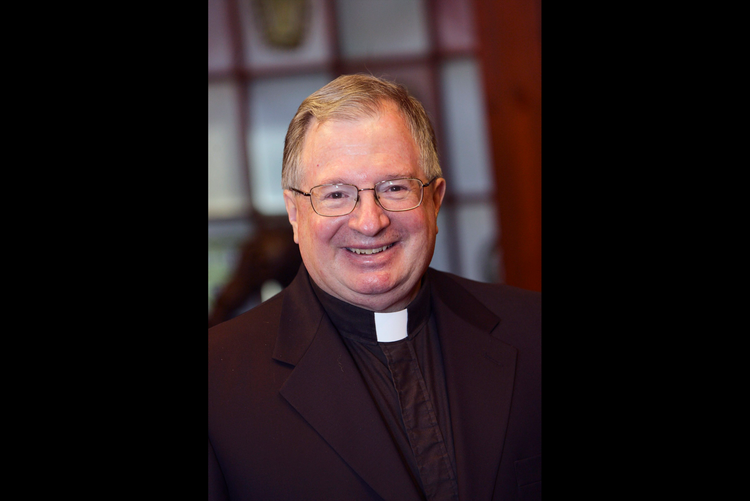 Drew Christiansen, S.J., who died today at the Jesuit community in Georgetown University, where he lived, was a soft-spoken scholar who took on one of the most difficult jobs ever faced by an American Jesuit.

In 2005, at the behest of then-Cardinal Joseph Ratzinger (soon to be elected Pope Benedict XVI), Thomas J. Reese, S.J., was removed from his position as editor in chief of America. I was working at America at the time and well remember those turbulent, sometimes traumatic, days.

At the time, the Jesuit Curia downplayed Cardinal Ratzinger’s role in the situation out of respect for the new pope. But Vatican reporters knew what had happened and reported it accurately. (After years of silence, Tom recently wrote about that chapter in our magazine’s history.) People asked: Was this the last move of Cardinal Ratzinger or the first move of the new Pope Benedict? What did it portend for America magazine? For the Jesuits in the United States? For the Jesuit order worldwide?

The Jesuit Conference of the United States appointed Drew to be Tom’s successor. Drew had worked at the magazine for the past year, more or less as Tom’s heir apparent, though we had no idea that Tom’s end would come so dramatically or so publicly.

Drew, a respected moral theologian who never set out to be the editor in chief, turned out to be the editor in chief we needed at the time. His curriculum vitae was vast: He had served as director of the Office of International Justice and Peace of the U.S. Catholic Conference (now the United States Conference of Catholic Bishops); and he had taught at the Jesuit School of Theology/Graduate Theological Union in Berkeley and the University of Notre Dame, where he was a member of the founding team of the Kroc Institute of International Peace Studies.

As for his academic credentials, Drew held a Ph.D., M.Phil. and M.A. from Yale University; an S.T.M. and M.Div. from Woodstock College; and a B.A. from Fordham University. He was also an acknowledged expert in just war theory, in Jewish-Christian relations, in Palestinian-Israel diplomacy and in the Holy Land in general. For his service to the Holy Land, Father Christiansen was named a canon of the Holy Sepulchre of Jerusalem.

It was perhaps that first credential that helped Drew the most in his new job: At a time when many bishops took note of the removal of our editor, Drew was able to steady the boat and deepen our relationships with the bishops, many of whom he knew personally, especially those in the United States. At the same time, Drew, like Tom, was not afraid of speaking truth to power. Often in editorial meetings, when someone worried that a particular editorial or article might offend some in the episcopacy, Drew would say, “The bishops need to be challenged on this point.”

Drew was passionate about many things, showing an energy that belied his quiet and scholarly exterior. Topics that could animate him were his academic interests, like just war theory, the “responsibility to protect” and peacemaking, but also the plight of Palestinian Christians, Teilhard de Chardin, the Second Vatican Council and, surprisingly, nature. Drew loved to hike and wrote movingly and beautifully about the natural world. He was, in addition to his many other gifts, a fine and subtle writer. I often told him that he should write a book of essays on nature. When I last visited him at Georgetown, he related all he was doing, even in his precarious health, adding: “And yes, I have to write that book on nature, too! I’ll get to it one day!”

I’ve worked under four editors and have learned that each editor puts his own distinctive stamp on the magazine (and now, the website). During Drew’s time, we focused a great deal on international politics, with an emphasis on one part of the world to which he was devoted. In one memorable editorial meeting, Drew reminded us that our next issue would be our “Middle East issue.” Patricia Kossmann—at the time, the lone lay editor and also the only woman editor—quipped, “Isn’t every issue our Middle East issue?”

So it won’t surprise you to learn that it was Drew who encouraged me to visit the Holy Land when I was writing a book on Jesus. I balked, saying it was too far, too dangerous and too expensive. “You can’t write a book on Jesus without seeing where he lived,” he said, firmly. Of course, he was right, and I always thanked him whenever I returned home from Israel.

Many years later, on one of the Holy Land pilgrimages sponsored by America Media, after hearing Drew rhapsodize about it for years, I finally was able to visit his beloved Ein Kerem, the site of the Visitation, in the beautiful “hill country of Judea” (cf. Lk 1:39). I was just as happy to see this magnificent site as to fulfill my promise to Drew that I would visit the town. That night in our hotel, I sent him photos, telling him how grateful I was for his encouragement. After that, I sent him a note on the Feast of the Visitation every year, thanking him.

Drew’s vast knowledge was worn lightly. At more than one editorial meeting, the topic would turn to questions of just war. The rest of the editors would chat a bit and then Drew would open his mouth, and out would pour a stream of knowledge, expertly guiding us through some history, some Vatican documents, some personal conversations he had had with participants. I was always brought up short, but then I would think, “Oh, right, he’s a scholar.” Sometimes Drew would mention some obscure Vatican document that was in the news, and it would turn out that he had had a hand in drafting it—quietly, of course.

Under Drew’s leadership, the magazine, now better able to navigate difficulties with bishops, hired more lay editors, so that Pat was not the only lay person (or woman) around the table. For someone who never wanted to be editor in chief, he turned out to be good at it: smart, thoughtful, consultative, wise and kind.

That last trait was the most important. Drew was an exceedingly kind person, always asking after you, after your family, wondering how your writing was going, recommending books or articles he thought you would like, offering you help whenever he could. Kind, mild, friendly, peaceable, self-effacing, generous. Toward the end of his time as editor, his health started to fade and he was less present in the office than he wanted to be. After Matt Malone, S.J., succeeded him in 2012, Drew returned to his beloved academia, taking a position as a senior fellow at Georgetown’s Berkley Center for Religion, Peace and World Affairs. “Three things you love!” I said when he told me.

Drew was a great scholar, a fine editor and a faithful priest. Most of all, he was kind. I can think of no better adjective that describes what it means to be a good Jesuit. May he rest in peace.