A Jesuit’s Palm Sunday with the ‘crucified church’ of Belize 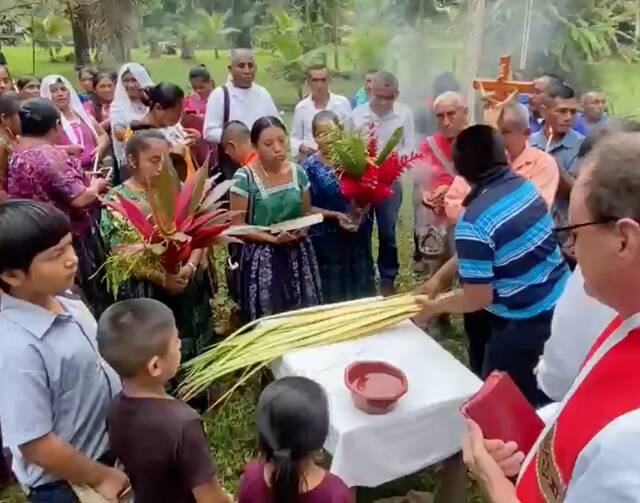 After a 12-hour journey from Belize City, Jesuit Father Sam Wilson begins Palm Sunday Mass with the people of Machakilha, deep in Mayan territory along the Belize border with Guatemala. Screen grab from video taken by Jeremy Zipple, S.J.

The 33 mission churches of Toledo District, in southern Belize, and the roughly 10,000 Catholics they serve, share a single priest, Jesuit Father Sam Wilson. This year, on Palm Sunday, he was on his way to celebrate Mass in “the last village on the map,” as he calls it, a hamlet of about 34 families named Machakilha, deep in Mayan territory along the Belize border with Guatemala.

The villages Father Sam pastors, mostly Q’eqchi’ Maya and a few Mopan communities, are nearly all off the grid—no electricity, cellphone towers or internet, no doctors and no paved roads. From Toledo’s main town of Punta Gorda, where Father Sam is based, it is three and a half hours of off-roading, then another 45 minutes of hiking through the jungle to reach Machakilha.

When we finally reach Machakilha, the entire population of the village has crammed into and around the simple church, singing hymns and offering prayers led by lay catechists.

When Father Sam began his assignment here five years ago, that final hike alone could take three hours, but the government is slowly improving and extending the district’s road network. As Father Sam passes various villages along the route, parishioners appear on the road and wave him down, cramming into the back of his pickup truck to hitch a ride to Mass.

This time during the final leg of the trip, on foot, heavy rains from the night before have rendered the access path into Machakilha a mud bath. Sister Esther Paau, an always smiling Pallottine missionary sister who works with Father Sam, sheds her mud-caked flip-flops and goes barefoot. She notes with a laugh that no one wore shoes in her village growing up, so she moves through unfriendly terrain much better without them.

When we finally reach Machakilha, the entire population of the village—plus visitors from several neighboring communities—has crammed into and around the simple church, singing hymns and offering prayers led by lay catechists.

A dozen children are waiting to make their first penance, so we start with their confessions. I can report that hearing first confessions of 8- to 10-year-olds is essentially the same, and equally delightful, whether in New York City or Belize. Everyone fights with their siblings; no one quite remembers the act of contrition.

For the final leg of the trip, on foot, heavy rains the night before rendered the access path into Machakilha a mud bath.

Now the congregation moves to the river on the outer edge of the village, where the Palm Sunday procession will start. Here we do not have to “import” our palm fronds. A few men are still chopping and distributing palm branches from adjacent trees.

As Mass begins, a village elder incenses the branches, processional crucifix, liturgical books and everything else with burning resin of the copal tree, the same incense his ancestors used in religious ceremonies millenia ago. The copal envelops us in smoke, and a wonderful woody odor trails us as we process in song back to the church for the Mass proper.

Jesuit missionaries first arrived in this corner of Central America over a century and a half ago, eventually establishing scores of mission stations and some 30 primary schools that today educate 5,000 students.

The church here is led by laypeople and always has been, as priests in Belize are not able to visit any given rural church more than a handful of times a year. Up until about 25 years ago, roads were nonexistent and Jesuits visited the mission stations entirely by foot and boat, walking the circuit of villages over the course of a few months. This system worked well for a long time, but as roads improved, an unanticipated challenge arrived: evangelical Protestant missionaries from the United States.

Sister Esther explains that when she was growing up, her village was entirely Catholic. But one day a vanload of evanglical missionaries turned up preaching a vehemently anti-Catholic message, and soon more and more villagers were coverting to Protestantism. Today, Catholics are unwelcome in her village and in several others.

Jesuit missionaries first arrived in this corner of Central America over a century and a half ago, establishing scores of mission stations and 30 primary schools that today educate 5,000 students.

“It makes me sad,” she says. “The village council interviews any new family seeking to move into the village and asks them if they are Catholic. If they respond, ‘yes,’ they will not be given land.”

While the Toledo District missions have many excellent catechist leaders, it is still challenging to compete with Protestants who pressure Catholics to convert. Father Sam says they ask his catechists, “Why should you only get to see your pastor a few times a year? Join our church and you’ll be your own pastor.”

In a few instances, catechists themselves have defected and brought the village congregation along with them.

In his Palm Sunday homily, Father Sam preaches on the cross—“the greatest act of love God has ever done, ever.” He reminds his flock that in the Gospels, Jesus was rejected by his own people, ignored, called names, made fun of. And that each time these things happen to us, “He understands and knows what we go through. He is with us.”

Father Sam’s prayer is that more of his brother Jesuits will answer the call to serve in assignments on the peripheries like southern Belize. “It’s where we should be,” he says.

It is as if he is preaching about them; Father Sam calls his flock the “crucified church” of Toledo—powerless, ignored, voiceless, struggling to eke out daily survival. When I spend time in this parish, I cannot help but ponder how dramatically Pope Francis’ ecclesial project of moving the church to its peripheries would transform the global church if we let it. I cannot help but wonder how different global Catholicism might look if these subsistence farmer-catechists, rather than those of us in wealthy societies, were setting the agenda.

Despite many challenges, the faith remains strong here, and Father Sam’s parishioners are forever asking him for more—more sacraments, more retreats, more faith formation. The Palm Sunday trip to Machakilha requires 12 hours of travel altogether—that’s 12 hours for a single Mass in a single village as 32 other villages go without the Eucharist this Palm Sunday.

As Palm Sunday Mass concludes, the community feasts on pork caldo, a spicy soup cooked on the fire overnight in a massive pot and served with poch, a staple starch made from corn masa steamed in a banana leaf. Four pigs were required for the feast, representing a large sum of money that the village collectively contributed to make this celebration happen. A team of women stayed up the night before preparing the communal meal.

Father Sam’s prayer is that more of his brother Jesuits will answer the call to serve in assignments on the peripheries like southern Belize. “It’s where we should be,” he says, citing a passage from Father Jerome Nadal, St. Ignatius Loyola’s longtime secretary and close collaborator: “The Society [of Jesus] has the care of those souls for whom either there is nobody to care or, if somebody ought to care, the care is negligent. This is the reason for the founding of the Society of Jesus. This is its strength. This is its dignity in the church.”