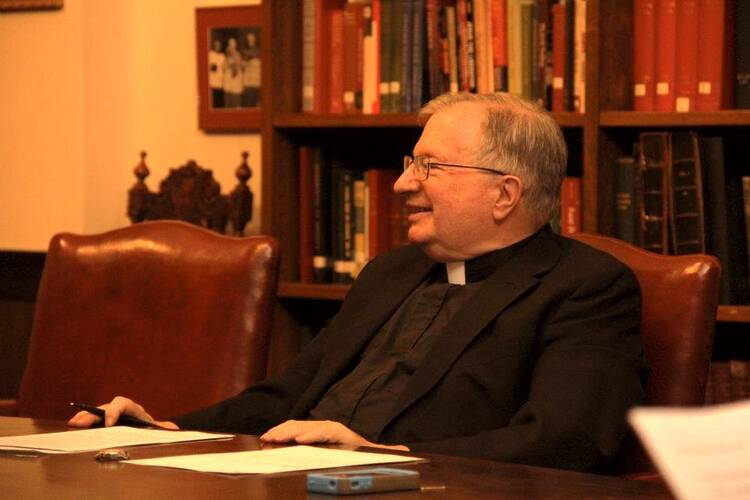 Andrew Christiansen, S.J., died April 6 in Washington, D.C. He is remembered by friends and colleagues as a devoted Jesuit priest, a profound scholar and a humble leader (Photo courtesy of America Media)

Andrew Christiansen, S.J., the 13th editor in chief of America and a noted scholar of ethics, peacemaking and public policy, died today, April 6, in Washington, D.C. He was 77 years old. His death was confirmed by officials of the Jesuit USA East Province.

Father Christiansen (known to his friends and colleagues as Drew) became editor in chief of America at a tumultuous moment in the magazine’s existence, with the removal of Thomas Reese, S.J., as editor in chief in April 2005 after continued criticisms from the Congregation for the Doctrine of the Faith as well as from certain U.S. bishops about the magazine’s content. In part because he had worked for many years with the bishops of the United States, Father Christiansen was able to mollify America’s more vocal critics and chart a careful course in a difficult time. He stepped down as editor in chief in 2012.

Matt Malone, S.J.: “Drew Christiansen was a devoted Jesuit priest and a true friend of America.”

“Drew Christiansen was a devoted Jesuit priest and a true friend of America. I know I would not be the editor of America today without his guidance, his encouragement and his endorsement,” said Matthew Malone, S.J., president and editor in chief of America Media. “And it’s also true that there would not be an America today but for Drew and his leadership. He took over as editor in chief (a job he never sought) in a moment of crisis following the departure of Father Tom Reese in 2005. He steadied the ship and safely sailed her through the stormy seas of the next seven years. He was a kind and generous man and a friend to all he met.”

Before his time at America as an associate editor and then editor in chief, Father Christiansen served as the director of the U.S. Conference of Catholic Bishops’ Office of International Justice and Peace, and also taught social ethics and peace studies at the Jesuit School of Theology at Berkeley and the University of Notre Dame, where he was a founding staff member of the Kroc Institute for International Peace Studies. He authored hundreds of articles and was published in more than a dozen foreign journals, and co-authored or edited a number of books on peacemaking and ethics. His many writings for Americacan be found here.

Father Christiansen most recently served as a Distinguished Professor of Ethics and Human Development in Georgetown’s School of Foreign Service and a senior fellow at the Berkley Center for Religion, Peace, and World Affairs. His areas of research in those positions included nuclear policy, just war and just peacemaking and Catholic social teaching. He was a frequent consultant to the Holy See and a member of the steering committee of the Catholic Peacebuilding Network. He also served on the Atlantic Council’s Middle East Task Force and on the Holy See delegation that participated in the negotiation of the Treaty on the Prohibition of Nuclear Weapons during the summer of 2017. He was also a Canon of the Holy Sepulcher of Jerusalem.

“I was always impressed by Drew’s ability to write succinctly, and with great insight, on very complicated subjects,” America deputy editor in chief Tim Reidy noted. “He had a rare combination of gifts, yet he was also humble and kind. Some of my fondest memories of him are discussing his favorite hikes in the Catskills or his love for cross country skiing near his family’s home in New England. He was a deeply prayerful man who found God in many, many things.”

“Father Christiansen was kind, gentle and understanding,” said longtime America receptionist Glenda Castro. “He came to America in a moment of crisis, and he gave all he had to give with his gifted knowledge.”

“Drew was very supportive of his staff, always encouraging us to pursue our own areas of interest in our writings. He was also a very thoughtful person,” wrote America executive editor Kerry Weber. “One of my fondest memories of him was when he, along with Ray Schroth, S.J., and Robert Collins, S.J., took the time to trek from Manhattan to Brooklyn to attend the ceremony at which I was inducted as a Mercy Associate. He brought a chocolate cake and sat happily chatting to many Sisters of Mercy and Associates.”

“I will most of all remember his kindness to my classmates and me and the interest he took in our lives.”

“Drew was the epitome of the gentleman scholar, an unassuming, self-effacing public intellectual during a time when the prominence and influence of that role has been squandered to petty squabbling and vanity,” said America senior editor Kevin Clarke. “He was also deeply wise and kind, passionate about peacemaking and the intellectual work of justice-seeking.”

“Behind his gentle demeanor was a true priest and scholar,” said America assistant editor Joseph McAuley. “There was nothing he didn’t know about when it came to the church or world affairs—and when needed, he could offer written commentary and analysis when deadlines loomed.”

“I was fortunate to take a class on Catholic social teaching with Father Christiansen at Georgetown,” remembered America studio production operator Kevin Jackson. “Another professor in the theology department lovingly referred to him as ‘the brainiac,’ and I soon found that to be true; he had a systematic way of navigating difficult topics and making them accessible to students. However, I will most of all remember his kindness to my classmates and me and the interest he took in our lives.”

“The thing that always impressed me about Drew is that he could write about such a wide range of issues with depth and also speed,” said America associate editor Jim McDermott, S.J. “There are so many topics on which you’d think, ‘Who could write in a meaningful and accessible way about this incredibly complex issue?’ and the first answer would be Drew.”