Dr. Fauci’s Catholic upbringing prepared him to fight against the AIDS crisis 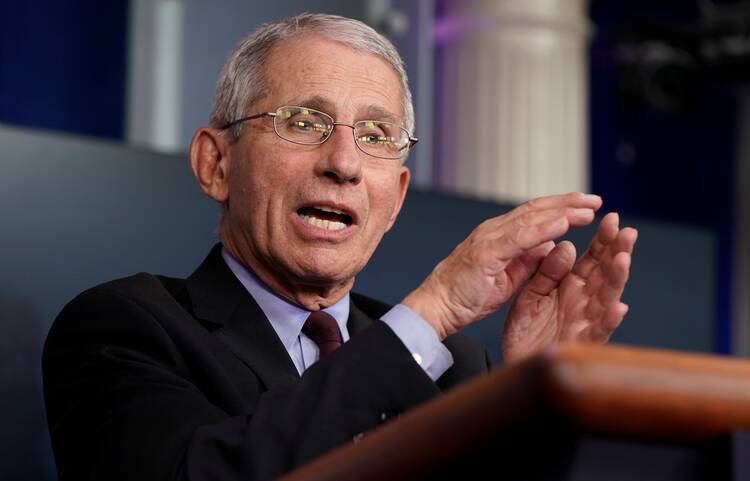 Dr. Anthony Fauci will be honored by the College of the Holy Cross this summer when the Worcester, Mass., Jesuit college renames a science complex for him, the school announced April 4.

“Dr. Fauci vividly personifies the distinctive characteristics of a Holy Cross education, and we know his life and work are already inspiring the next generation of empathetic servant leaders,” Holy Cross President Vincent D. Rougeau said in a press release. The naming ceremony will coincide with Dr. Fauci’s 60th reunion weekend in June.

In an interview with Dr. Fauci for my recent book, Hidden Mercy: AIDS, Catholics, and the Untold Stories of Compassion in the Face of Fear, I learned that the Jesuit commitment to intellectual honesty impressed Dr. Fauci when he was a student, first at Regis High School in Manhattan and then at Holy Cross. Before Covid-19, Dr. Fauci was the nation’s top doctor fighting H.I.V. and AIDS, and in a counterintuitive way, his Catholic upbringing seemed to help prepare him for that public health crisis.

He had been raised by his Catholic parents not to look down on anyone and to step up to help whenever he could. Those lessons were fortified by his teachers and professors at his Jesuit high school and college, he told me, but he didn’t agree with the hardline positions he heard later as an adult from Catholic leaders against rights for women, gays and people who might not fit neatly into the categories they seemed to believe were essential to a moral life.

By the time he took over the National Institute of Allergy and Infectious Diseases in 1984, those lessons guided him to the realization that he needed to listen to the community being most affected by this new epidemic: gay men.

Dr. Fauci said some bishops’ messages seemed less concerned about promoting effective public health than about passing judgment on the kinds of people who were getting sick.

“When you’re dealing with a disease, the people who are suffering most from the community, you’ve got to listen to what it is that they have to say about their experiences,” he said.

Dr. Fauci eventually understood that meant engaging in dialogue with gay activists, sex workers and drug users. It took some prodding. Some gay activists, including some of the founders of the Gay Men’s Health Crisis and the radical protest group ACT UP, accused him of not acting quickly enough to stop the spread of H.I.V. Others took him to task for not supporting the rights of people with AIDS to access experimental drugs. Dr. Fauci listened to their concerns, made adjustments, and eventually won their support.

Through my research on the church’s response to H.I.V. and AIDS, first for the podcast series “Plague” from America Media and then for Hidden Mercy, I learned Dr. Fauci was just one of the many Catholics active in the fight against H.I.V. Other Catholics, such as Sister Pascal Conforti, a chaplain at St. Clair’s Hospital in New York, spent time with people with AIDS, listening to their hopes and fears and providing a gentle presence in their final days. There were still others who led support groups, delivered food to the homebound and even protested against the failure of political leaders to take the epidemic seriously.

As for the church’s leaders, some bishops seemed genuinely torn about how best to respond, with calls for compassion sometimes being drowned out by concern for doctrinal clarity.

[Plague: Untold Stories of AIDS and the Catholic Church]

Dr. Fauci said some of their messages seemed less concerned about promoting effective public health than about passing judgment on the kinds of people who were getting sick.

“Certain elements of the church were not as accepting of the community who were afflicted because of the fact that it was predominantly a gay community, injection drug users, commercial sex workers,” he recalled. “They were not as embracing of the people who were affected as they should have been.”

As doctors and other public health officials realized condoms would help protect gay men from contracting H.I.V., Dr. Fauci could not believe what he was hearing from some bishops, including the politically influential New York archbishop, Cardinal John O’Connor. While the cardinal said he privately visited people with AIDS at the city’s Catholic hospitals, when it came to his public role, he regularly preached against gay civil rights, which put him at odds with L.G.B.T. Catholics.

“He didn’t show a degree of empathy or flexibility toward the gay community and what their needs were, what they were suffering from,” he remembers thinking. “He was very, I think, rigid in his approach to them.”

For Dr. Fauci, the church hierarchy’s response to the AIDS epidemic was at odds with the message he had learned from his parents and from the Jesuits about the importance of serving other people.

Dr. Fauci also faulted the church for spreading false information, including messages that flew in the face of everything public health experts knew about slowing the spread. Some high-profile bishops said that condoms might actually hurt those who used them. In 1987, the Archdiocese of Boston filmed television commercials about H.I.V. and AIDS, but the ads frustrated public health experts with their suggestion that condoms were ineffective in fighting the spread of H.I.V.

Then there was the more belligerent Catholic League for Religious Liberty and Civil Rights, which backed an ad campaign in 1994 on mass transit in New York, Boston, and Washington. “CONDOMS DON’T SAVE LIVES,” read one ad. “But restraint does.”

Dr. Fauci found that kind of dishonesty reprehensible and “completely out of line.” Intolerance from some bishops grated on him, at odds with the message he had learned from his parents and from the Jesuits about the importance of serving other people.

He eventually stepped back from the church and he no longer practices his faith in a traditional way, but he supports Catholic immigration and educational ministries. He also credits the Jesuits with instilling in him an intellectual honesty and a sense of compassion for the marginalized. He wonders how history might have looked had more church leaders lived out those values in the public square during the height of the AIDS crisis.

As he imagines it, “A lot of lives would have been saved.”