An interview with Pope Francis’ friend Marcelo Figueroa, the first Protestant editor at the Vatican newspaper 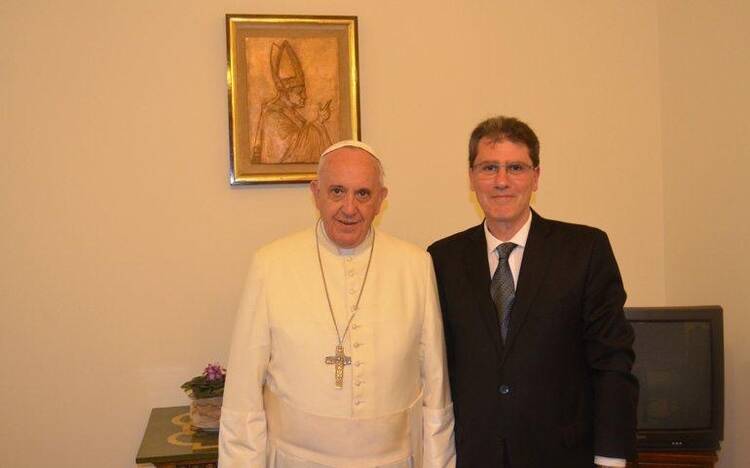 Marcelo Figueroa, an Argentinian Presbyterian who has known Pope Francis for over 20 years and was the first Protestant ever to be employed as an editor by L’Osservatore Romano, the Vatican daily newspaper, has published a 367-page book on the ecumenical journey of the first Latin American pope.

Published in Italian under the title Le Diversità Riconciliate: Un protestante nel giornale del Papa (“The Differences Reconciled: A Protestant in the Pope’s Newspaper”), the book will be published in English and other languages in due course.

Mr. Figueroa gave an exclusive interview to America before presenting the book at a press conference in the Vatican. He described his life, his relationship with then-Cardinal Jorge Bergoglio (now Pope Francis) and how he has observed Francis take major steps forward both on the road to Christian unity and in dialogue with other religions.

He reveals that Pope Francis read the draft text of the book, concluded that “it is important,” suggested that the Vatican publish it and wrote the prologue in which he recommends it “with enthusiasm” to an ecumenical readership.

Mr. Figueroa, who is married to Emilse, a lawyer and the daughter of a Baptist pastor, with whom he has two children, told America that he became a committed member of the evangelical church in Argentina at the age of 25. “I did so because I was deeply interested in the Bible, and in those years the evangelical church was very good at teaching the Bible.”

After graduating with a degree in economics from the University of Buenos Aires, he said he began to work with the United Bible Society, first as an accountant and later as its national director. He was convinced that it was important to have an ecumenical relationship with the Catholic Church and felt this could be developed around the Bible.

He was convinced that it was important to have an ecumenical relationship with the Catholic Church and felt this could be developed around the Bible.

When Jorge Mario Bergoglio became the archbishop of Buenos Aires in 1998, Mr. Figueroa proposed that they “work together” on Bible-related initiatives. He received an enthusiastic response from the future pope, and subsequently the two created events like “The Day of the Bible in Buenos Aires.” They became “close friends,” Mr. Figueroa said, and when he left his job with the U.B.S., Archbishop Bergoglio invited him to work for the archdiocese as “a biblical consultor.” For the next three years, he prepared reflections on the Bible every day for Catholics in Buenos Aires, using the lectio divina method, and posted them on the archdiocesan website.

In 2010, Cardinal Bergoglio invited him to work as assistant to the director of the archdiocese’s television station. That September, Mr. Figueroa proposed that the cardinal participate in an inter-religious television program to discuss social problems in light of Scripture with Rabbi Abraham Skorka, with Mr. Figueroa as anchorman. The project worked well, he said: They made 31 hour-long episodes between October 2010 and February 2013. In November 2013, after the papal election, Mr. Figueroa published their conversations in Spanish (now in English as The Bible: Living Dialogue, Religious Faith in the Modern Times).

Mr. Figueroa said he was first invited to write an article for L’Osservatore Romanoin 2015 by Silvina Perez, the editor of its Spanish edition, and was subsequently asked to write others. In October 2016, he was given a regular contract to write a weekly article for the newspaper. In 2017, following consultation with Pope Francis and the Argentine bishops’ conference, it was decided to publish an Argentinian edition of the Vatican daily, and Mr. Figueroa was appointed as its editor, a post he still holds. In that capacity he traveled with Pope Francis to Sweden on Oct. 31, 2016, to participate in the commemoration of the 500th anniversary of the Protestant Reformation.

[Read next: Pope Francis' long history of working with other faiths]

Mr. Figueroa told America that after having written for six years for the Vatican daily, he felt the need to take stock and review Pope Francis’ ecumenical journey. He selected 100 articles out of the 300 he had written that best reflected his personal take on the ecumenical thrust of Francis during his pontificate. He collated them in a single draft text and made two copies. He gave one to Pope Francis in November 2021 and told him, “I wrote it from my guts.” He kept the other. Soon after, Francis recommended he publish the text.

On March 13—the ninth anniversary of the election of Pope Francis—Mr. Figueroa went to Santa Marta, the Vatican guesthouse where the pontiff lives, and gave Francis the first copy of the Italian edition of the book, which included the pope’s prologue.

In the prologue, Francis described the book as “an ecumenical pilgrimage: genuine, personal and, above all, spiritual.” He recalled that Mr. Figueroa had said the book came from “his guts” and said he liked this expression: “We speak about the ‘ecumenism of love, of hope, of mercy, of peace’ and ‘the ecumenism of blood’ but now we also have ‘the ecumenism of the gut.’”

"If one overlooks the pages of the Gospel, we will never fully understand Pope Francis."

Commenting on the fact that the book contains 100 articles written by “this Protestant biblical scholar” in L’Osservatore Romano over the past six years, Francis said, “It fills me with joy that this historical fact and the real ecumenical opening of the Vatican daily has taken place during my pontificate.” He said the articles had helped him “to look at the ecumenical journey that has been made, and that has yet to be done, through the eyes of a brother who seeks to re-read and interpret my pontificate in an ecumenical lens.”

He rejoiced that the vision of ecumenism “rooted in my pontificate” and presented in the book “is a way of seeking to be the one Church founded on the Lord Christ and…a journey that we make together in prayer, in works of charity and in witness, under the gaze of God.”

Mr. Figueroa, reflecting on his long friendship with the pope, said that what most impresses him about Francis is “the coherence of his life. For one part, he is the same person I have known for over 20 years. He is the same, simple person. On the other hand, I realize that the tools that I used to know Bergoglio 20 years ago aren’t useful to understand Francis today.” As pope, Mr. Figuerao said, “I feel he has become very profound, he moves around the world, he has another vision of the role of the church and of the role of ecumenical and interreligious dialogue in the world, and its real potential for peace, for solidarity.”

Mr. Figueroa told America that he has frequently been asked what books he would recommend someone read to understand Pope Francis. His answer: “I always respond by encouraging them to read Matthew, Mark, Luke, and John—the four Gospels. And then, if possible, the whole Bible!” He added, “Many other books can help, but if one overlooks the pages of the Gospel, we will never fully understand Pope Francis.”

In addition to the four Gospels, he said one should take account of Francis’ prayer life. “The Gospels and prayer are at the root of his ecumenism,” he said. “Ordinary people, the poor people, understand this, and help us to read the Gospels, too.” He said that they also understand when Francis speaks about “the ecumenism of blood” because “the persecutors do not distinguish between the denominations or faiths to which the martyrs belong.”

Mr. Figueroa said Francis understands that there is also an “ecumenism of the gut” that is deeply rooted in the hearts of people and is linked to the “teologia del pueblo” (“theology of the people of God”). He concluded that this ecumenism finds expression today in the way ordinary people across all faiths “are praying for peace as the war rages in the Ukraine.”