Pope Francis' long history of working with other faiths 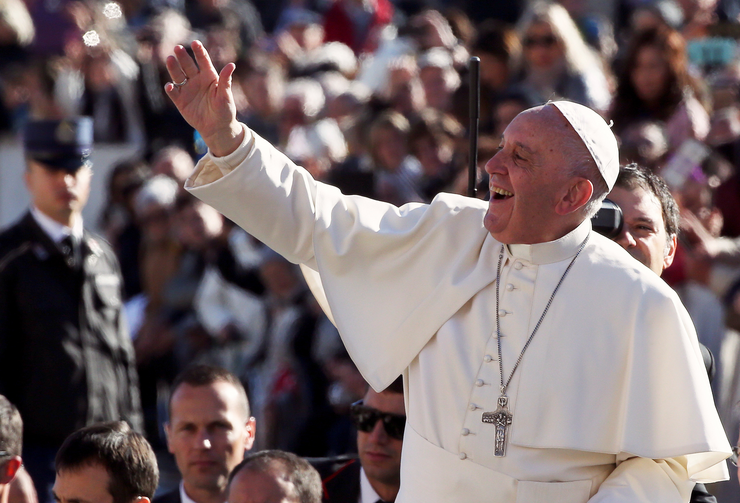 Pope Francis waves as he arrives to lead his Nov. 9 general audience in St. Peter's Square at the Vatican. (CNS photo/Stefano Rellandini, Reuters)

When Pope Francis flew to Sweden on Oct. 31 to participate in the commemoration of the 500th anniversary of the Protestant Reformation, Marcelo Figueroa, 59, a member of the Evangelical Church in Argentina and an old friend, was on the plane too. He was there as the recently appointed director of a new and original Argentine edition of L’Osservatore Romano, the Vatican daily, that will bring the pope’s words to his homeland every week.

For Mr. Figueroa, the pope’s participation in the ecumenical commemoration of the Reformation at the Lutheran cathedral in Lund was not only a truly historic moment, it was also for him a profoundly emotional one, given their personal relationship and work together in the field of ecumenism in Buenos Aires for 17 years.

They have known each other since 1998, when Jorge Mario Bergoglio, S.J., became archbishop of that metropolis. Mr. Figueroa, then director of the United Bible Society in Argentina, believed it was “very important” to have an ecumenical relationship with the Catholic Church and felt convinced this could be developed around the Bible. He proposed to the new archbishop that they “work together” around the Bible, and he received an enthusiastic response. Subsequently they created events like The Day of the Bible in Buenos Aires and produced papers on biblical texts. “In this way, we came close together, we became very close friends,” Mr. Figueroa confided over dinner after the recent trip to Sweden.

Many years later, after Mr. Figueroa left his job with the U.B.S., Archbishop Bergoglio invited him to work for the archdiocese as “a biblical consultor.” For the next three years, this Protestant layman-cum-biblical scholar prepared reflections on the Bible every day for Catholics in Buenos Aires, using the lectio divina method, and posted them on the archdiocesan website.

In 2010 Cardinal Bergoglio invited him to work as assistant to the director of the archdiocese’s television Channel 21. That September, Mr. Figueroa proposed that the archbishop participate in an interreligious television program to discuss social problems in the light of Scripture. Cardinal Bergoglio at first hesitated but finally agreed to do four programs when he understood that it would be a discussion with his friend Rabbi Abraham Skorka and with Mr. Figueroa as the Protestant anchorman. The project worked well. They made 31 hourlong programs between October 2010 and February 2013. In the November after the papal election, Mr. Figueroa published their conversations in Spanish (now in English as The Bible: Living Dialogue, Religious Faith in Modern Times).

It was hardly surprising, then, that Marcelo Figueroa was profoundly moved when Pope Francis declared in his homily at the Lutheran Cathedral in Lund: “With gratitude we acknowledge that the Reformation helped give greater centrality to sacred Scripture in the church’s life. Through shared hearing of the word of God in the Scriptures, important steps forward have been taken in the dialogue between the Catholic Church and the Lutheran World Federation, whose 50th anniversary we are presently celebrating.”

Commenting on the ecumenical commemoration afterward, Mr. Figueroa hailed Francis’ presence as “most significant” and “an important part of ecumenical history.” He noted that the pope participated in a truly humble way throughout, wearing the same stoles as the Lutheran bishops. He interpreted all this as Francis’ way of saying to the Lutherans, “Yes, I am the pope, but, first of all, I am your brother!”

Mr. Figueroa emphasized that this ecumenical event was “a commemoration, not a celebration” because “we do not celebrate this division.” On the contrary, he said, in Lund “we recognized the scandal of this division in the world and in the heart of Christ, we acknowledged our sins, and we accepted to work together in ‘the ecumenism of mercy’ to help all who suffer or are excluded, and especially today migrants and refugees.”

Marcelo Figueroa concluded with this significant remark: “Bergoglio did not discover ecumenism when he became pope; he had practiced it as bishop in Buenos Aires for many years, even in the face of opposition.”