Brazilian bishop: I hope the synod will end clericalism in the church 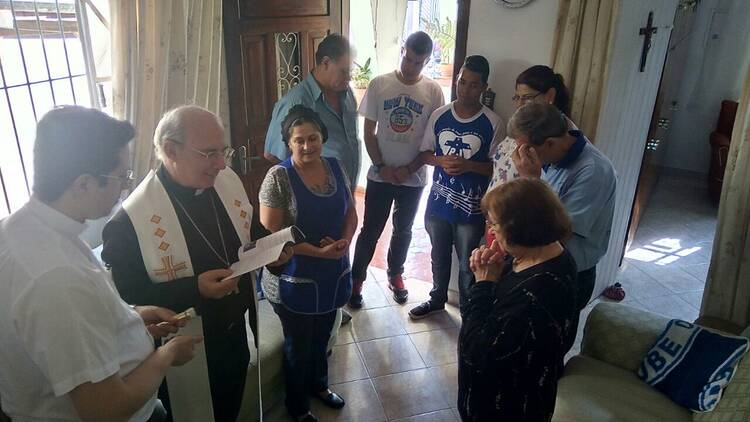 Bishop Cipollini prays with the faithful during a “missionary pastoral visit” to São Caetano do Sul in the state of São Paulo, Brazil, in September 2016. Photo courtesy: Diocese of Santo André.

The church needs to overcome clericalism once and for all in order to effectively promote unity and synodality, said Brazilian Bishop Pedro Carlos Cipollini in an interview conducted over Zoom last December. Bishop Cipollini leads the Diocese of Santo André, a territory that includes 2.8 million people and 106 parishes in the metropolitan area of São Paulo.

President of the Commission for the Doctrine of the Faith in the National Conference of Brazilian Bishops (C.N.B.B), Bishop Cipollini recently published the book Synodality: Everyone’s Task (Sinodalidade: Tarefa de Todos).

In an exclusive interview with America, he considered Pope Francis’ proposal for synodality and challenges to its success.

“It is clericalism that prevents the church today from being missionary,” Bishop Cipollini said. “I have great hope that the synod on synodality can make clericalism collapse—perhaps not entirely, but at least in its major strongholds. If this synod doesn’t overcome that difficulty, I don’t know when we will have another opportunity.”

Bishop Cipollini: “It is clericalism that prevents the church today from being missionary. I have great hope that the synod on synodality can make clericalism collapse.”

The bishop describes clericalism as a sort of “chauvinism of the clergy” that allows clerics to presume themselves “above any law.” With this distorted view of the church, he said, “clerics appropriate ecclesiality to the point of identifying the church with them, becoming the sole bearers and subjects of ecclesial action.”

Instead, all the baptized are actors in the church, as “disciples and members of the people of God,” he said, referencing the Latin American church’s “Aparecida” document of 2007. “Clericalism infantilizes the laity and causes them to imitate the clergy and become clerical too. Clericalism is the first hindrance to synodality,” Bishop Cipollini said. “Clericalist clergy may consult everyone, but they end up saying that the people don’t know what they are talking about, as the Pharisees said in the Bible, as if the people were a mass of ignorants.”

The Catholic Church is currently organizing a synodal process, inaugurated by Pope Francis in October 2021, that has been defined as the largest consultation ever held in church history. Dioceses and religious communities around the world have begun the first stage of consultations with the faithful. The synodal path will proceed to regional and continental stages, ending with an assembly of bishops in Rome in October 2023.

Diocesan synods have been envisaged in the Code of Canon Law for many years (Canons 460-468), but they have been little applied by bishops. Bishop Cipollini, however, convened a synod in his diocese in 2016. Only two years after taking office in Santo André, he called all faithful in the seven cities covered by the diocese to participate. In addition to consultations with the faithful at the parish-level, 2,000 laypeople attended its diocesan assemblies, which were conducted over 18 months. After the synod, a diocesan constitution and a pastoral plan were published. Among the concrete recommendations urged by the faithful realized so far was the creation of a vicariate for charitable works.

Bishop Cipollini describes clericalism as a sort of “chauvinism of the clergy” that allows clerics to presume themselves “above any law.”

In his book, Bishop Cipollini argues that laypeople should take a more prominent role in the church. He writes: “Baptismal dignity is the foundation of the theology of the laity and also of a synodal Church. Without resolving this question, there is no synodality. We need a pedagogy, a methodology of ecclesial participation.”

To this point he recalled that Brazil, the country with the largest Catholic population in the world, has seen Catholics as a share of the total population fall toward 50 percent. In the 1980s the number had been as high as 80 percent. “We surveyed our region recently and we found out that 46 percent of the people identify as Catholic. I believe the next one will show 41 percent,” the bishop said.

“Laypeople no longer accept a clericalist and authoritarian church. They don’t fight anymore; they simply go out the back door. They leave,” he said.

He said the antidote to this tendency is to radically embrace synodality, forming clergy “for service, not for the exercise of power in the way of the world,” and understanding the church as a body that needs to hear all members to keep moving. “Synodality is the church’s ‘way of being,’” he told America. “Vatican II speaks of the church as a sacrament—or mystical body of Christ—but also as people of God. These two concepts need to be understood together.

Synodality, Bishop Cipollini said, allows the sensus fidei to find its full expression. In practice, this means that much of the church’s decision-making can be decentralized.

In his apostolic exhortation “Evangelii Gaudium,” Pope Francis emphasizes that the church is “first and foremost a people advancing on its pilgrim way towards God” (No. 111). Bishop Cipollini believes that the Latin American church, with its various and historic regional conferences, has advanced a lot in the understanding and in the application of the concept of the sensus fidei. According to the Second Vatican Council, all baptized participate in Christ’s ministry through the gift of faith.

“We see in our communities laypeople who can’t read, but they are wise people because the sense of faith is linked to the gift of faith, which the Holy Spirit gives, more than the books,” Bishop Cipollini said. “The sensus fidei comes from baptismal faith and is a gift from God to his people.”

Synodality, he said, allows the sensus fidei to find its full expression. In practice, this means that much of the church’s decision-making can be decentralized. But synodality is not just about debating issues and reaching a majority vote—he recalled that Pope Francis insists that “the synod is not a parliament.”

The synodal process is, in fact, a journey of authentic and selfless dialogue, Bishop Cipollini said. “It is about speaking the truth but also of searching for the truth together. The synod is a spiritual process.” Communion, participation and mission—the three words guiding the current synod on synodality—come from “unity in diversity, from the Holy Trinity,” he said.

“The goal of a synod is community discernment in the light of the Holy Spirit,” Bishop Cipollini writes in Synodality: Everyone’s Task. “All members of the Church are co-responsible in maturing choices and planning the common path to follow.”