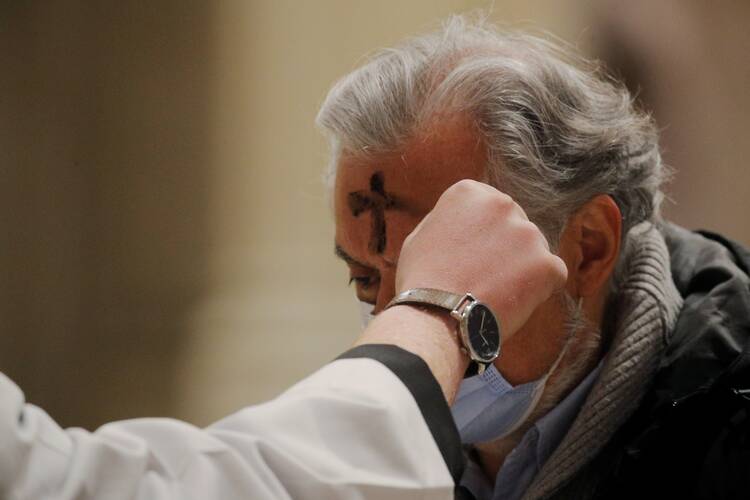 “Did you get your ashes?” One Wednesday each year the question circulates among North American Roman Catholics. Some pose it with a sense of urgency, others out of duty, and still others with excitement.

For a holy day for which the annual date is neither fixed (such as Christmas) nor for which observance by attendance at Mass is obligatory (again, Christmas), Ash Wednesday exerts a powerful draw on Catholics. A symbolic gesture that does not number among the official seven sacraments of the church, “getting your ashes” continues to attract far more of the faithful than going to confession. Practice of the sacrament of penance, even just once per year, has for a half-century now been in steep decline to the point of disuse among an increasing percentage of the Catholic population. In contrast, the scope of Ash Wednesday’s appeal has over these same decades widened steadily beyond Roman and Anglo-Catholicism to Protestant congregations.

I well remember taking a phone call in February of 1996, when I was residing in the rectory of an Atlanta parish while writing my dissertation at Emory University. The secretary rang to say that a Baptist pastor was on the line with a question about Catholicism that she hoped I would field. The minister explained to me that a growing number of his congregants desired an Ash Wednesday service and asked me to explain the ritual’s meaning.

That I did, beginning with the gesture’s source in the biblical symbolism of covering the head or even body in ashes as a sign of mourning and repentance. Finding my start from Scripture warmly received, I relayed how by the late 11th century a psalm antiphon (from Jl 2:13) exhorting repentance and ashes opened the service inaugurating the 40-day period in preparation for Easter. Physically imposing ashes on the head (another biblical image), already widespread in Europe, became the traditional accompanying gesture in Rome.

The popularity of getting ashes imprinted on the forehead invites, as does any culturally strong symbol, interpretation.

The pastor, not surprisingly, wanted to know where the ashes came from and how they were administered. I answered that both had to do with the saving mystery of Christ’s death and resurrection. The customary source for the black cinders is dried-up palm fronds from the previous year’s Holy Week. For the penitent, baptized Christian, Lent is a time to focus on reconciliation and return to Communion. For individuals seeking to join the church, it is a time of personal and communal preparation for celebrating the Easter sacraments—baptism, confirmation and Eucharist.

Then, for the question of how the ashes are imposed, I relayed the two formulas in the Sacramentary at that time: the primary one, “Turn away from sin and be faithful to the Gospel” (Mk 1:15), and the second option, from the medieval era, “Remember, man, you are dust and to dust you will return” (Gn 3:19).

Of the two formulas, the first more clearly proclaims the “two elements which are especially characteristic of Lent,” according to the instruction of the Second Vatican Council’s “Constitution on the Sacred Liturgy” (1963)—namely, “the recalling of baptism or the preparation for it, and penance.” Rather than simple self-improvement or singular self-denial for all that Jesus suffered for me, the council’s restorative vision for Lent is of an “inner” conversion to following more faithfully the Christ into whose death we are baptized so as to participate in his risen life, life in the Spirit. Such renewal is not individualistic but for the life of the world. The constitution thus calls for Lenten penance that is “not only internal and individual but also external and social,” recognizing and committing to counter “the social consequences of sin.”

The popularity of getting ashes imprinted on the forehead (a North Atlantic custom, versus the more ancient, southern European sprinkling of ashes on the crown of the head) invites, as does any culturally strong symbol, interpretation. The stylized, repetitive nature of ritual symbolism is always in tension with what social scientists call sincerity, the realm of thought and intention. The ambiguity of symbol in any act of ritualizing, in contrast to the precision of symbol (words) in discourse, can intensify the question of sincerity.

The word Amy used to express her irritation with the Ash Wednesday hubbub was “hypocrisy.” Annually she observed through the ensuing weeks of Lent no increased numbers joining the church at prayer on Sunday.

Each year as Lent nears, I recall Amy, a 20-something friend aggravated by what she described as “everybody running around asking, ‘Did you get your ashes?’” That was in the South Boston of the early 2000s, where she practiced highly effective social work among youth as her vocation, her living out of the call of the Gospel, the promise of her baptism.

Amy, while not pious in a sanctimonious way, was nonetheless one of a small minority of young adults in the neighborhood who participated in Mass weekly. The word she used to express her irritation with the Ash Wednesday hubbub was “hypocrisy.” Annually she observed through the ensuing weeks of Lent no increased numbers joining the church at prayer on Sunday, no changes in the amount or type of food and drink consumed, no curtailing of dances and parties and shopping—in a word, nothing to indicate that getting ashes was anything more than a popular group identifier. To Amy’s frustration, the “external and social” dimension of Lent among her fellow Catholics was not about conversion to the Gospel and addressing “the social consequences of sin.” Getting your ashes, she figured, was vapidly displaying, “I’m Catholic.”

But here the issue of identity comes to the fore, as it must. It must because, anthropologically speaking, symbols applied to skin (whether tattoos, wedding rings, ashes or baptismal water) mark and, thus, shape and empower identity. And identity, we mortals both sense and know, is ambiguous, always in need of affirmation and, at times, renegotiation. Ash Wednesday continues to exercise its appeal along a spectrum of ambiguity and sincerity, from mortal to moral frailty, the lifelong quest for reconciling the “inner”—the personal, unique, authentic—and the “outer”—the shared, social, conventional. It matters that people want to identify as Christians, even if we live out our beliefs imperfectly.

Christians in the United States practice the faith in a harried, never-enough-time, individualizing, consumer-driven society, even as their work and home relationships require constant negotiation of that faith life amid religious and ideological pluralism. Thus have arisen innovative adaptations of the ritual and even the material symbol of Ash Wednesday in Anglican and Protestant ministries.

“Glitter Ash Wednesday” has, not surprisingly, garnered much attention from news media ever searching for an original angle to cover the start of Lent.

A dozen years ago in greater Chicago, three Episcopal congregations began “taking the church to the streets” on Ash Wednesday. Standing on commuter train platforms, clergy members’ offer of prayer with imposition of ashes found an enthusiastic reception among individuals forgetful of the tradition or lacking time to attend a church service. The practice has spread across the United States and multiple Anglophone countries. The “Ashes to Go” website provides guidelines, prayers and handouts for sidewalk encounters, coffee shop conversations and short outdoor services. Meanwhile, adapting to American car culture, some Lutheran pastors offer drive-through ashes.

Most recently, the identity-proclaiming interpretation of Ash Wednesday has taken on a new form among some dozen denominations in multiple states. “Glitter Ash Wednesday” has, not surprisingly, garnered much attention from news media ever searching for an original angle to cover the start of Lent. The rationale for mixing glitter with ashes is the making visible and affirming of L.G.B.T.Q. Christians, whom promoters describe as hidden, hated and rejected by both queer and church communities. Reads one website: “Sparkle and shine with us, as we celebrate queer lives of faith and courage.” The practice has met with mixed reactions.

As for the Roman Catholic scene, I have baby-boomer childhood memories of trotting alone down the aisle of the parish church sometime after school on Ash Wednesday to the priest who, apparently, stood there for hours repeating the medieval gesture. My adult years have witnessed priests, pastors and campus ministry directors insisting that ashes be distributed only during the celebration of Mass. Both extremes pastorally and liturgically miss the mark.

Essential to the agenda of the “Constitution on the Sacred Liturgy” for the restoration and renewal of the church’s rites is the role of sacred Scripture. No sacraments (like penance) nor sacramentals (like Lenten ashes) are normally to be celebrated without some proclamation of Scripture, at least a brief homily and some short litany or general intercessions.

For the many Catholics drawn to the sacramental of ashes who habitually absent themselves from the Sunday assembly, having the climax of the liturgy be the Communion rite seems inadvisable.

Since 1970, therefore, the norm is for ashes to be conferred during a liturgy, an assembly of the people of God, that includes a service of the word. This saves the custom from devolving into an individualistic identity marker or ritualistic “external” gesture. With daily Mass being a millennium-long practice in Western Catholicism, the continuation of the service into a liturgy of the Eucharist is not surprising. It should not, however, be forced upon people, for both liturgical and pastoral reasons.

Ash Wednesday is not a solemnity of the Lord; participation in Mass is not obligatory. An unfortunate pattern in Euro-American Catholicism has been excessive (clerical) insistence upon situating any and all liturgical actions in a Mass (the paramount nature and function of Sunday liturgy notwithstanding). For the many Catholics drawn to the sacramental of ashes who habitually absent themselves from the Sunday assembly, having the climax of the liturgy be the Communion rite seems inadvisable. Preaching holistic conversion, including renewed liturgical participation, followed by “writing” that word with ashes on the body, may in itself better serve as a pastoral invitation to prayer, fasting and almsgiving toward renewed baptismal commitment at Easter. 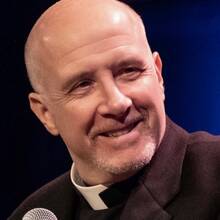 Bruce T. Morrill, S.J., holds the Edward A. Malloy Chair in Roman Catholic Studies at Vanderbilt University, where he is professor of theological studies in the Divinity School.