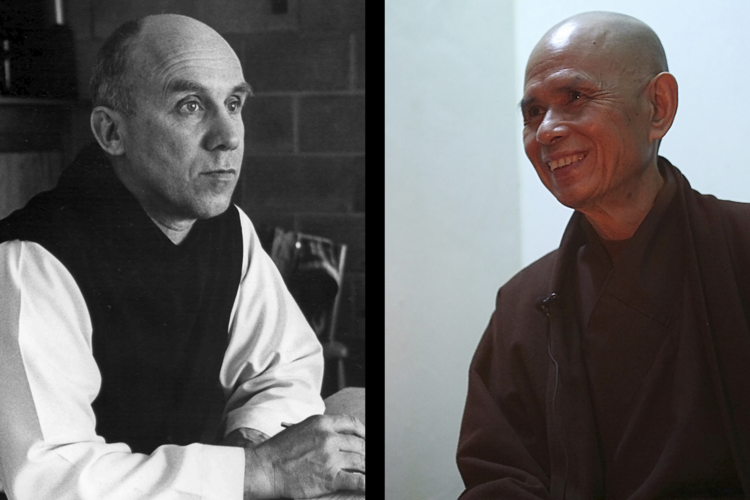 In 1966, Thich Nhat Hanh, the Vietnamese Buddhist monk, visited the United States on a lecture tour to enlighten the American people about the war in Vietnam from the perspective of the Vietnamese. His trip included a series of meetings with politicians, thinkers and religious leaders, including Martin Luther King Jr., and in May of that year, he met the Trappist monk Thomas Merton.

Merton’s own interest in Nhat Hanh, who died on Jan. 21 at the age of 95, was twofold. In the early 1960s, Merton became a proponent of nonviolence in the face of the nuclear war machine that he believed could only lead to collective suicide. In that vein, he was a vocal critic of the Vietnam War, which he described in 1968 as an “overwhelming atrocity.” Merton wanted to converse with Nhat Hanh to understand more thoroughly what was going on in Vietnam.

Merton also wanted to talk to Nhat Hanh about Buddhism and Buddhist monasticism. Readers of Merton’s autobiography, The Seven Storey Mountain, know that his interest in Buddhism began while at Columbia University after reading Aldous Huxley’s book, Ends and Means, in which Huxley, drawing on Buddhist writings, wrote about humanity’s need to embrace asceticism and contemplative practice in order to transcend its basest impulses.

Merton believed that Buddhist and Christian contemplatives could learn from one another, particularly in a world seemingly bent on its own self-destruction.

But it wasn’t until the late 1950s that Merton began to delve more deeply into Buddhist writings and to correspond with Buddhist thinkers, like the Zen master D. T. Suzuki (1870-1966). Merton became convinced that Christian contemplative monks had much to gain from dialogue with Buddhism. Without denying or disregarding the real differences that exist between Christianity and Buddhism, Merton believed that Buddhist and Christian contemplatives could learn from one another, particularly in a world seemingly bent on its own self-destruction.

On May 28, 1966, Nhat Hanh visited Merton’s home at the Abbey of Gethsemani. According to a mutual friend, the recently deceased Jim Forest, the two conversed late into the night. They talked about monastic chant, about meditation in each other’s traditions, about monastic formation. And they talked about the Vietnam War.

A number of years later, Nhat Hanh recalled their meeting fondly: “Conversation with him was so easy,” he said. “He was open to everything…. He wanted to know more and more. He did not talk so much about himself. He was constantly asking questions. And then he would listen.” He continued: “I was impressed by his capacity for dialogue.”

Nhat Hanh was to give a talk to the monks of Gethsemani the day after his meeting with Merton, but he lost his voice. Merton stepped in and spoke to the community about their conversation together. The talk was recorded, and it is clear from the tape that Merton was impressed by the Vietnamese monk. Describing Nhat Hanh as “an extremely simple, humble person,” Merton told his brothers that Nhat Hanh was “a completely formed monk” with whom he felt in “complete contact.”

Thomas Merton: “I have far more in common with Nhat Hanh than I have with many Americans, and I do not hesitate to say it.”

Merton emphasized to the monks that the Vietnam War “has to be seen as a manifestation of a spiritual crisis,” and as such, he insisted that it is the business of monks—including contemplative monks—to be in dialogue with a brother monk from the situation even if he is from a different tradition. And Nhat Hanh was very open about what was going on in his country. “Everything is destroyed,” Merton recalled him saying when asked about the war.

Merton was so impressed by Nhat Hanh that one month after the visit he wrote a letter to the Nobel Prize committee urging that this “true messenger of peace and of spiritual values” be considered for the Nobel Peace Prize. It was also shortly after their meeting that Merton published a short essay called “Nhat Hanh is My Brother” in Jubilee magazine. Here Merton expressed his love for Nhat Hanh in words that also showed how disillusioned he was with so many of his fellow Americans whose support for the Vietnam War confounded him:

I have said Nhat Hanh is my brother, and it is true. We are both monks, and we have lived the monastic life about the same number of years. We are both poets, existentialists. I have far more in common with Nhat Hanh than I have with many Americans, and I do not hesitate to say it. It is vitally important that such bonds be admitted. They are the bonds of a new solidarity and a new brotherhood which is beginning to be evident on all the five continents and which cut across all political, religious and cultural lines.

As fellow contemplatives in a world characterized by divisiveness, Merton and Nhat Hanh chose to see in one another that which united them, to affirm in each other that which they also saw within themselves. Both recognized that the path to peace could only be forged by the kind of dialogue that focused upon that which unites rather than divides. While Merton was no supporter of a naïve relativism or syncretism that, in his words, “accepts everything by thinking of nothing,” he nevertheless argued that that which unites us must be affirmed for the sake of peace.

This was a principle that characterized Merton’s life as well as the life of Thich Nhat Hanh. And on that one spring day in 1966, in a monastery in the middle of Kentucky, two men from different religious traditions and nationalities—one a citizen of a country being bombed and the other a citizen of a country doing the bombing—embraced each other as brothers.

Gregory Hillis is professor of theology and religious studies at Bellarmine University in Louisville, Ky. He is the author of Man of Dialogue: Thomas Merton's Catholic Vision, published by Liturgical Press.

@gregorykhillis
Show Comments ()
Join the conversation: Login or create an account
Before you can comment, you need to update your profile to include your first and last name, as required in our comments policy. Then reload this page and you'll be set up for commenting. Update your profile