Podcast: What the Vatican thought of the U.S. bishops’ meeting 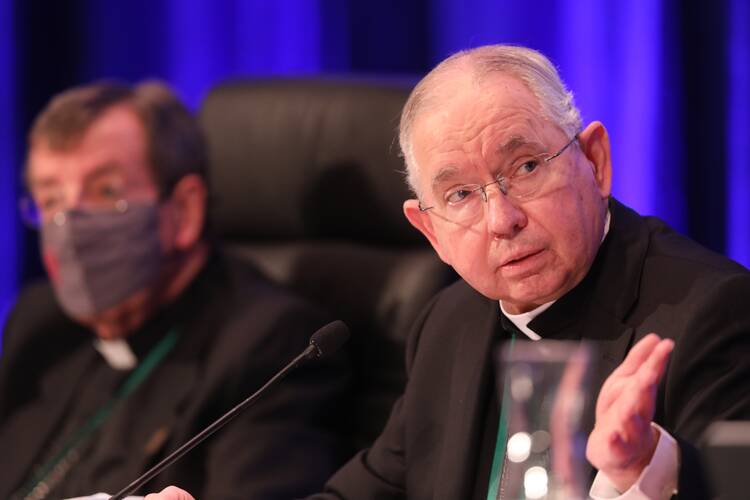 Archbishop José H. Gomez of Los Angeles, president of the U.S. Conference of Catholic Bishops, gestures alongside Detroit Archbishop Allen H. Vigneron, vice president, during a Nov. 17, 2021, session of the bishops' fall general assembly in Baltimore. Due to the COVID-19 pandemic, it is the first in-person bishops' meeting since 2019. (CNS photo/Bob Roller)

The U.S. bishops approved their long-awaited and much-debated document on the Eucharist at their November meeting last week. This week on “Inside the Vatican,” America’s national correspondent Michael O’Loughlin, who covered the meeting in Baltimore, joins Vatican correspondent Gerard O’Connell and host Colleen Dulle for a conversation about what the bishops decided and what the Vatican hopes they will do next.

The final document, which passed with an overwhelming 222 votes, focused primarily on the theology of the Eucharist and only made oblique reference to pro-choice politicians. But the bishops stepping back from a contentious debate in favor of unifying around the pastoral need they see for better catechesis on the Eucharist was the kind of show of unity the Vatican had hoped to see, Gerry said on the podcast.

In the second half of the show, the panel discusses Vatican officials’ interventions at the bishops’ meeting. Their messages on synodality and sexual abuse, paired with a message Pope Francis shared with the Italian bishops’ meeting this week, paint a picture of a Vatican that is relieved at the resolution to the ‘Communion wars’ and hopes to see the bishops unify around other issues.