Eucharistic revival or Communion war? How politics and the pandemic are framing a debate among U.S. bishops 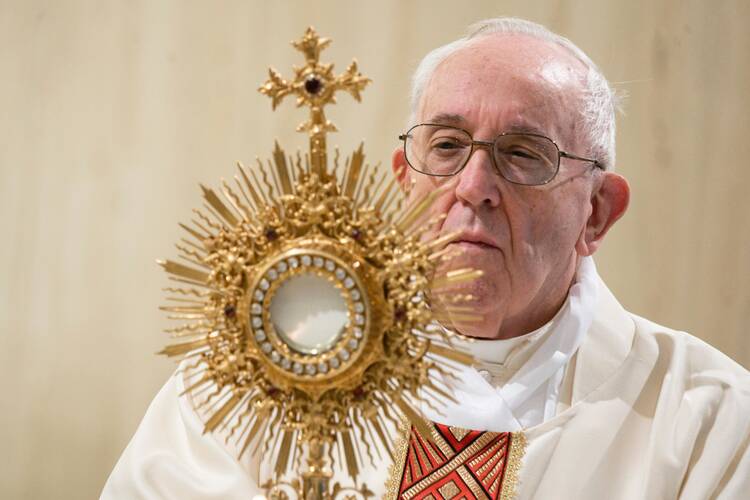 Pope Francis raises the monstrance during eucharistic adoration at the end of Mass in the chapel of his Vatican residence, the Domus Sanctae Marthae, May 5, 2020. (CNS photo/Vatican Media)

The U.S. bishops’ debate over whether pro-choice politicians like President Joseph R. Biden should be allowed to receive communion has been raging for over a year now. After the bishops’ meeting last November, the bishops created a sub-committee aimed at addressing the challenges of working with a Catholic, pro-choice president.

Archbishop Jose H. Gomez, president of the U.S. bishops conference, informed the Vatican in March that the working group had decided to draft a document on “Eucharistic coherence,” and Cardinal Luis Ladaria, prefect of the Vatican’s Congregation for the Doctrine of the Faith, responded in a letter telling the bishops that their document should not focus solely on politicians, and advising them to engage in dialogue with one another and with the politicians the bishops would be writing about.

The Vatican’s effort to temper the bishops’ statement appears to have been successful: a leaked draft of the document lacked any explicit reference to pro-choice politicians, focusing instead on the idea of a Eucharistic revival and a restatement of Eucharistic theology.

On this deep dive episode of “Inside the Vatican,” producer Maggi Van Dorn and host Colleen Dulle dig into the history of the U.S. bishops’ engagement with political issues and give some background on today’s “Communion wars” and the calls for a “Eucharistic revival.” They ask: If no one can win the “communion wars,” does everyone lose?

Can the U.S. bishops be saved from partisan politics?

Explainer: Why the Eucharist is confusing for many Catholics (and survey researchers)

No one can win the Communion wars over abortion

Pope Francis: ‘I have never denied Communion to anyone.’

Archishop Aquila: For the church to live in eucharistic coherence, we must be willing to challenge Catholics persisting in grave sin.

Bishop McElroy: The Eucharist is being weaponized for political ends. This must not happen.