‘It just hurts’: Catholics react to Vatican ban on blessings for same-sex couples 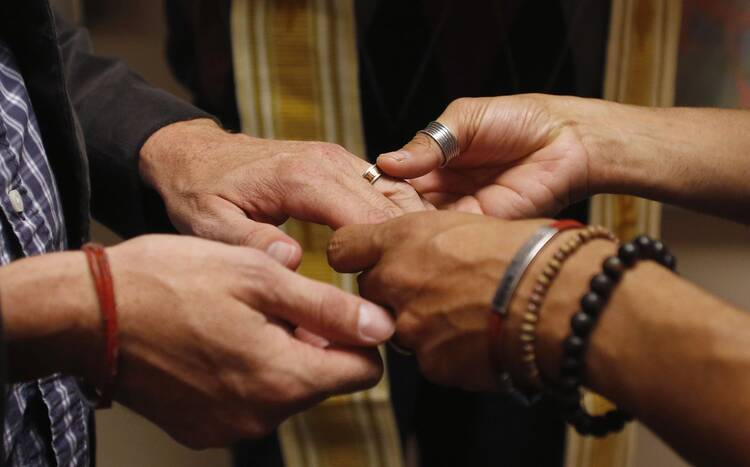 A same-sex couple is pictured in a file photo exchanging rings during a ceremony in Salt Lake City. The Vatican's doctrinal office says in a new note that any form of blessing of same-sex unions is "illicit," but that the negative judgment is on the blessing of unions, not the people, who must be respected. (CNS photo/Jim Urquhar, Reuters)

L.G.B.T. Catholics and their allies are reacting with dismay to a statement released Mondayby the Vatican Congregation for the Doctrine of the Faith prohibiting priests from blessing same-sex unions, in which church officials assert that God “does not and cannot bless sin.”

The Rev. Bryan Massingale, a gay Catholic priest and professor of theology and social ethics at Fordham University, said priests who want to engage in pastoral outreach to the gay and lesbian community “will continue to do so, except that it will be even more under the table...than it was before.”

For Catholics in same-sex relationships, he said, the Vatican’s new message will hurt.

“Every human being is born with this innate desire to love,” Father Massingale said. “For those who are oriented toward members of the same sex...to have it being described as inherently or innately sinful without any qualification, that is crushing.”

L.G.B.T. Catholics and their allies are reacting with dismay to a statement released Monday by the Vatican prohibiting priests from blessing same-sex unions.

In addition to the ban on blessings, the Vatican document reiterates existing church teaching that says L.G.B.T. individuals should be welcome in the church, stating, “The Christian community and its Pastors are called to welcome with respect and sensitivity persons with homosexual inclinations, and will know how to find the most appropriate ways, consistent with Church teaching, to proclaim to them the Gospel in its fullness.”

Flora Tang, a doctoral student in theology at the University of Notre Dame who identifies as queer, said, “Something that we all have to acknowledge is the sense of disappointment and pain that any queer Catholic would feel while reading a document like this.”

Ms. Erdlen runs a support group for L.G.B.T. undergraduate students who, she said, appreciate the more welcoming tone Pope Francis has taken toward the L.G.B.T. community but are hurt when statements like this are released with the pope’s sign-off.

“For those who are oriented toward members of the same sex...to have it being described as inherently or innately sinful without any qualification, that is crushing.”

“When the C.D.F. does this, it’s not done without the pope. They’re not disconnected, and even if I want to detangle them from one another, that’s not how the Catholic Church works,” Ms. Erdlen said. “Rationally, today, I want to say, ‘No, it’s not a difference, it doesn’t matter,’ but at heart I’m a kid from a conservative archdiocese, so every kind statement from Francis, from ‘Who am I to judge?’ to his comments last fall about legal same-sex unions deserving civil protections matter...even when church teaching doesn’t change.”

“I want to say that we shouldn’t settle, but to be a queer Catholic is to make compromises and to decide how much you’re willing to bear,” Ms. Erdlen said.

James Martin, S.J., an editor-at-large for America and author of Building a Bridge: How the Catholic Church and the L.G.B.T. Community Can Enter Into a Relationship of Respect, Compassion, and Sensitivity, urged Catholics not to lose sight of that teaching.

“The church is called to continue to reach out to L.G.B.T.Q. people with ‘respect, compassion and sensitivity,’ as detailed in the Catechism, imitating Jesus's reaching out to all those who feel in any way marginalized,” Father Martin said. “This outreach is a journey for both the church and L.G.B.T.Q. Catholics.”

The statement, which was signed by Pope Francis and released by the Congregation for the Doctrine of the Faith, says “it is not licit to impart a blessing on relationships, or partnerships, even stable, that involve sexual activity outside of marriage.” Why the statement was released now is unclear, though in recent months some bishops in Germany have proposed that church leaders consider how to be more welcoming to L.G.B.T. people, including the possibility of church ministers blessing same-sex relationships. Last fall, a new documentary premiered about Pope Francis entitled “Francesco” showed footage of him expressing support for same-sex civil unions, comments the Vatican later said were taken out of context. That film will be released more widely later this month.

“I want to say that we shouldn’t settle, but to be a queer Catholic is to make compromises and to decide how much you’re willing to bear,” Julia Erdlen said.

The president of the German Bishops’ Conference, Bishop Georg Baetzing, gave a guarded response to the Vatican’s refusal to bless same-sex unions, indicating he would be open to a change in church doctrine on homosexuality. Bishop Baetzing told Germany’s Catholic News Agency on Monday that he was “not happy with the congregation’s massive intervention.”

“The Congregation for the Doctrine of the Faith reflects the status of church doctrine as mirrored in several Roman documents,” Bishop Baetzing said. He added there had been discussions for some time in Germany and other parts of the church about “how this doctrine and doctrinal development can generally be advanced with viable arguments—on the basis of fundamental truths of faith and morals, progressive theological reflection and equally in openness to more recent findings of the human sciences and of the life situations of people today.”

One advocate for L.G.B.T. Catholics said that widespread support for same-sex marriage among lay Catholics in the United States will help create welcoming spaces in the church in spite of official teaching.

Francis DeBernardo, the head of New Ways Ministry, a group that provides resources about ministry to L.G.B.T. Catholics, said that the Vatican’s statement could actually encourage Catholics who support same-sex unions to be more vocal in demanding change in the church.

“This decision though is an impotent one because it won’t stop the movement to bless such couples, and, in fact, it will actually encourage Catholics in the pews and the many Catholic leaders who are eager for such blessings to happen to work harder in their support—and blessing—of same-sex couples,” he said.

Eve Tushnet, a Catholic who identifies as gay and who writes about her decision to live in accordance with church teaching on homosexuality—Catholics who are attracted to people of the same sex are called to live chaste lives—said in an email to America that she was “glad that the C.D.F. mentioned ‘positive elements’ of sexually active gay relationships.” She called that recognition “an act of wisdom and humility to see that many people enter into these relationships because they're trying to lead lives of care, devotion and love.”

But Ms. Tushnet, author of the forthcoming book Tenderness: A Gay Christian Guide to Unlearning Rejection and Experiencing God's Extravagant Love, said she wondered why church officials are not more creative when approached by same-sex couples seeking blessings from the church.

“I know [church officials] cannot change overnight. But I do want to hear what the pope said to me: ‘God made you like this. God loves you like this,’” Juan Carlos Cruz said.

“Such possible paths would include covenant or vowed friendships. We see these in Scripture, in the love shared by Jonathan and David, and they were practiced for centuries by Christians seeking to become kin to someone of the same sex. The C.D.F. weirdly assumes here that the only kind of same-sex love anybody might want to bless is a sexual union, but many people (of all sexual orientations) are rediscovering traditions in which friends became family to one another,” she said.

A gay Catholic who says he is friends with Pope Francis condemned the statement, telling America that reading the words felt like “a bit of a sword in your heart.”

“L.G.B.T. people are not seeking special rights; they’re just seeking to be recognized,” Juan Carlos Cruz said, adding that he is “baffled” as to why Vatican officials release statements that further alienate some Catholics and their families. He said he hopes to discuss the statement with Pope Francis.

“I know [church officials] cannot change overnight. But I do want to hear what the pope said to me: ‘God made you like this. God loves you like this,’” Mr. Cruz said. “That is the message we should all be hearing.”

Material from the Associated Press and the German Catholic News Agency KNA was used in this report. Colleen Dulle contributed to this report.