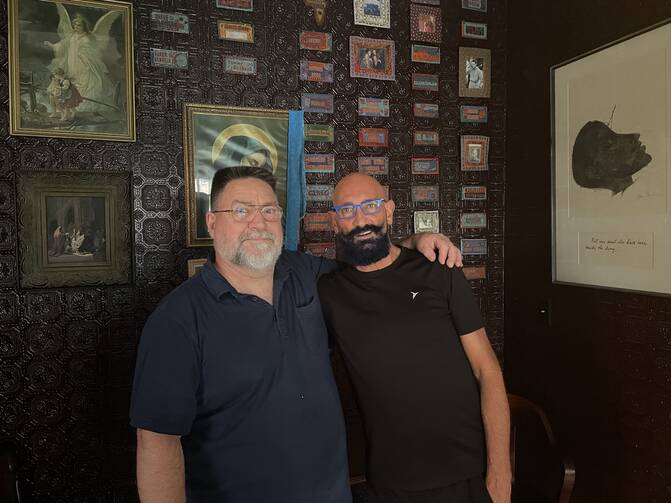 This story was adapted for a special bonus episode of America's podcast, "Plague: Untold Stories of AIDS and the Catholic Church." Listen to it here, or download it in your podcast app:

I stand on the sidewalk in front of a three-story Victorian house in Syracuse, N.Y. The intricate details are painstakingly painted in bright hues of yellows and blues and greens. Michael DeSalvo and Nick Orth are outside to greet me. They purchased the home in the early 1990s as they started a life together. At the time, they did not know that this house would one day serve as more than their own home. They had no idea that over the next several years, dozens of people would spend their final days and weeks there alongside them.

We make our way inside. The walls contain more Catholic kitsch than a cathedral gift shop. Michael notices me looking around and begins an impromptu tour. Icons of the Virgin Mary in ornate, faux-gold frames. Celtic crosses. Saints whose names and images I do not immediately recognize. He explains that friends have donated many of the items and they are in on it, the over-the-top fabulousness of their particular expression of Catholicism. But when he catches me glancing over at one particular wall, he becomes more serious. This wall is why I’m here.

Just opposite the front door, on a wall painted a deep red, are rows and rows of small brightly colored ceramic plaques, each one inscribed with a different name. A few photos, mostly of young men, hang in between. Juan. Tommy. Mark.

Nick and Michael opened their home to people dying from AIDS in 1992. They were intent on responding with mercy to a crisis that at the time showed no signs of slowing.

By the end of that year, nearly 200,000 Americans had died from AIDS, most of them gay men, and effective therapies were still a few years away. Shame and stigma surrounded the virus, and the need for housing and hospice care far exceeded available resources.

For the past few years, I have been meeting Catholics who responded to H.I.V. and AIDS with care and compassion, often at great risk to their own vocations and reputations. I’ve sought to understand how they stayed committed to an institution that seemed intent on fighting against their civil rights during an epidemic that upended their community.

I was drawn to Michael and Nick’s home in Syracuse because I wanted to ask how their faith compelled them to respond to the need with such great generosity.

They told me about the first person to move in, a man named David. A mutual friend had asked Michael, a talented hairstylist and community activist, to visit David, who was homebound, and give him a haircut. When Michael arrived, he encountered what was becoming an all too familiar scene, but one that held its power to shock the senses. David was wasting away, lying on the floor, unable to clean or feed himself. He told Michael that friends and volunteers would bring by food when they could; but the rest of the time, David was on his own. He could not cope.

Shame and stigma surrounded the virus, and the need for housing and hospice care far exceeded available resources.

“Do you wanna come home with me?” Michael blurted out.

He then took a second to consider his words. Michael and Nick had just moved into their new home. They were still unpacking. He had not even asked Nick if they would be able to care for guests with intense medical and emotional needs. But when David accepted the invitation, Michael felt God’s presence. This is what he and Nick were being called to do.

For the next few weeks, Nick, a trained chef, cooked healthy meals for David. Michael used his contacts in the community to ensure no needs went unmet. David died, but his final days were spent in dignity, surrounded by caring people, rather than being stuck at home alone.

So much need remained, yet the community offered few resources. It didn’t take long for another guest to move in. And then another. And another.

In a way, it seemed predestined that Michael and Nick would turn their home into something akin to an AIDS hospice. They had met while protesting war and nuclear weapons and had both been active in the Catholic Worker, the movement founded by Dorothy Day to serve the poor and fight for peace. They knew they would continue to be involved in social justice activism in Syracuse, though they were not sure what that would look like. Now they did.

To pay homage to their involvement in the Catholic Worker, Nick and Michael decided they would transform their home into a house of hospitality, in the style of the dozens of similar homes modeled after the original one Dorothy Day started in 1933 in New York. Though there is no process to become a Catholic Worker House—the movement is anarchistic, after all—Michael and Nick decided they needed a name for their house.

They knew they would continue to be involved in social justice activism in Syracuse, though they were not sure what that would look like.

Thus “The Friends of Dorothy Catholic Worker House” was born. For gay men of a certain age, asking if another man was a “friend of Dorothy” was a coded way of finding out if he was gay, a tongue-in-cheek reference to the Wizard of Oz’s Dorothy, Judy Garland’s most famous character. At the same time, the house name paid homage to Dorothy Day, who had inspired Michael and Nick to undertake this work in the first place.

Dorothy Day was born in 1897 to a somewhat irreligious family. But while writing for socialist newspapers in Greenwich Village in the 1920s, she began to wonder why Catholicism appealed to the working immigrants whose rights she had been fighting for. That eventually led to her conversion, her founding of the Catholic Worker newspaper and then the establishment of Houses of Hospitality, which offered rooms and soup lines and food pantries.

The Catholic Worker attracted a number of gay and lesbian volunteers from its beginning, the biographer John Loughery told me. He and Blythe Randolph co-wrote Dorothy Day: Dissenting Voice of the American Century, in which they recount Day’s ambivalence toward homosexuality. She could be kind to individuals who identified as such, including the young man who returned to the Catholic Worker following a brief absence, telling Day that he had left his wife after discovering he was gay. Day told him she loved him and welcomed him back.

Day told him she loved him and welcomed him back.

On the other hand, she was a faithful to church teaching, writing in her diary in the 1970s that her heart was “troubled” by the fact that “this practice of ‘unnatural sex’ is now being proclaimed from the housetops in America.” She preferred the approach of St. Paul, whom she quoted often when confronted with the issue: “Let these things be not so much as mentioned among you.” As Loughery put it to me, “That’s a classier way of saying ‘Don’t ask, don’t tell,’” a de facto policy that he said had been in place at the Catholic Worker for decades.

Ambivalence aside, something about Dorothy Day’s witness and work inspired countless numbers of L.G.B.T. Catholic Workers over the past many decades. In the 1990s, in addition to the Friends of Dorothy House in Syracuse, at least a handful of other houses opened specifically for people with AIDS, including the St. Catherine of Genoa House in Chicago and the Bethany House in Oakland, Calif.

I asked Michael what he made of this, how he and so many other L.G.B.T. Catholics drew inspiration from a woman who seemed unable to fully embrace people like him. He said he and Nick have long experienced discrimination in the church. Few Catholics he knew were willing to help in the early days of their AIDS ministry, seemingly unwilling to be associated with an illness so colored by shame and stigma. Some Catholics even refused to recognize them as a couple, including the time an article in a Catholic publication about an award they were slated to win insisted on ignoring this important part of their lives.

Michael and Nick said Day was never under the impression that the church was perfect. She had been critical of its leaders and thought its priorities could be misplaced. Yet she did the hard work of the Gospel anyway. That is the spirit from which they drew their inspiration, how they found the courage to ask a dying man to move into their home even though they were still unpacking their own lives. Feeding the hungry, caring for the sick and sheltering those without homes became far more important than the slights they felt from other Catholics.

“When you are taking care of people who are dying, a lot of pretense is gone,” he explained. “We just love them and treat them with kindness and respect and give them dignity.”

Ultimately, it is their relationships with God that sustain their work.

Michael told me that he and Nick are not looking for approval from the institutional church. They feel Dorothy Day lived out her faith in a similar way. And ultimately, it is their relationships with God that sustain their work.

“The one thing I have confidence in is that God loves me,” Michael said.

He said his Catholic faith and belief in God were bigger than the prejudices he encountered from other believers and that they continue to sustain their work nearly three decades later. As both treatments for H.I.V. and the need for intensive services continue to evolve, the Friends of Dorothy House has expanded its mission to serve a broader segment of people.

Our dedicated staff is producing groundbreaking content every day, including the “Plague” podcast. This production would not be possible without the generous support of our subscribers. If this content is meaningful to you, please get a subscription today! CLICK HERE TO SUBSCRIBE.

Michael J. O’Loughlin is the national correspondent for America and host of the America Media podcast “Plague: Untold Stories of AIDS and the Catholic Church.” He is the author, most recently, of Hidden Mercy: AIDS, Catholics, and the Untold Stories of Compassion in the Face of Fear.