Pope Francis told bishops to shepherd pro-choice politicians ‘with God’s style.’ What does that mean in practice? 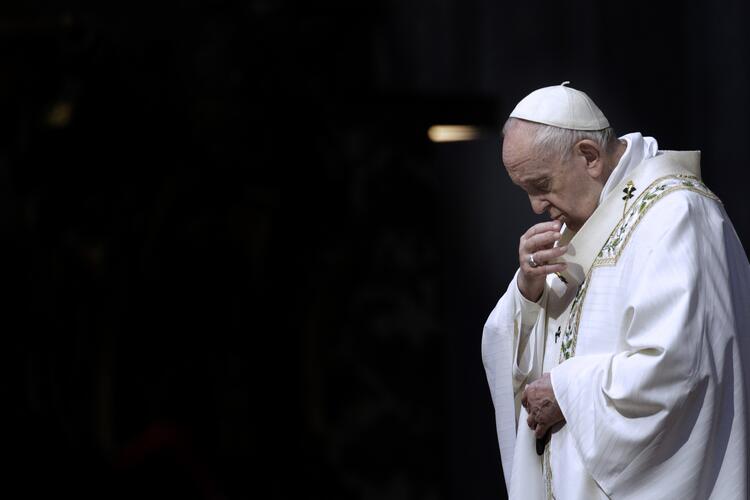 Pope Francis celebrates a Mass in St. Peter's Basilica at the Vatican May 16, 2021. Celebrating Mass with the Myanmar community living in Rome, the pope prayed for an end to violence in their country. (CNS photo/Donatella Giagnori, pool)

On his in-flight press conference on Wednesday at the end of his trip to Hungary and Slovakia, Pope Francis responded to a question from America’s Vatican correspondent, Gerard O’Connell, about giving Holy Communion to pro-choice politicians. What Pope Francis did not do—in fact what he refused to do—was to settle the question universally and definitively.

Instead, Pope Francis’ answer had a three-part structure: 1) affirm the moral teaching on the injustice of abortion; 2) affirm that people can place themselves outside of the community of the church and thus make themselves unable to receive Communion worthily; 3) point out that the controversies over whether to deny Communion arise not from disagreements over the theological principles in points one and two but rather as a pastoral problem about how to apply them. Francis spent most of his answer warning that the failure to deal with this pastoral problem as pastors could lead bishops into “taking sides about political life,” which does not end well for the church.

What Pope Francis did not do—in fact what he refused to do—was to settle the question universally and definitively.

I have written about these issues twice before. In May, the head of the Congregation for the Doctrine of the Faith sent a letter recommending an extensive dialogue process before the bishops of the United States attempted to issue guidance around the question of Communion for pro-choice politicians. At the time, I explained why, even if all the bishops could agree on barring pro-choice politicians from receiving Communion, such a policy would not likely achieve the political end of strengthening support for laws against abortion. In June, the bishops voted to move forward with drafting a document on eucharistic coherence without taking the time for the recommended dialogue process. I then wrote that Catholics who come to opposing conclusions about whether pro-choice politicians should be denied Communion can both be motivated by pastoral concern.

I think both of my earlier analyses are in tune with Pope Francis’ focus on the pastoral problem presented by this question. But his response highlighted two points that help me recognize how easy it is to fall into the trap of dealing with pastoral questions in a way that collapses them into political problems, all the while thinking that one is acting as theological and moral truth requires.

First, Francis said that a pastor “must be a shepherd with God’s style,” which he described as “closeness, compassion and tenderness.” He added that this requirement applies even in a pastoral relationship to those who are excommunicated and pointed to scriptural illustrations of this divine “style.” At the conclusion of his answer, Francis again referenced the closeness, compassion and tenderness triad and said that these pastoral principles “are from theology, the pastoral care is theology and the Holy Spirit, who leads you to [act pastorally] with the style of God.”

What Pope Francis highlights here is that closeness, compassion and tenderness are themselves theological truths about who God is in relationship with human beings.

What Pope Francis highlights here is that closeness, compassion and tenderness are not pastoral constraints on how fervently one announces other theological truths but are themselves theological truths about who God is in relationship with human beings. Acting pastorally “with God’s style” is not in opposition to speaking forthrightly about the moral truth of abortion as unjust violence and saying clearly, as Pope Francis did, “whoever performs an abortion kills” and that “accepting this is kind of like accepting daily murder.” Acting pastorally with God’s style does not mean soft-pedaling these truths. Instead, it means finding ways to remain close, as God does, even to people who refuse or are unable to accept these moral truths.

Second, Pope Francis referenced casuistry and the controversy over the discussion in “Amoris Laetitia” of pastoral accompaniment of divorced couples. (A group of theologians have gone so far as to accuse the pope of heresy.) Because Francis has not previously involved himself with the specifically American debate over whether President Biden should receive Communion—and even in yesterday’s answer, he specifically avoided addressing the particularities of the U.S. situation—I was initially puzzled by this reference to “Amoris Laetitia.” The issue here is one where U.S. bishops are disagreeing with each other, not with the pope, and it has nothing to do with marriage.

But I realized on reflection that these two controversies both arise out of distrust of pastoral judgment rather than formal theological disagreement. The theology of marriage in “Amoris Laetitia” is entirely congruent with the Catholic tradition. But some people thought that its call for pastoral accompaniment of divorced couples, with discernment according to individual circumstances, would be misapplied to undermine the teaching on worthiness for reception of Communion. In other words, they were unwilling to trust pastors to apply a teaching, even though that teaching itself was not being questioned.

Pope Francis has a broader—and I would also say braver—vision of what being a pastor means.

Similarly, in the current debate in the U.S. church about pro-choice politicians receiving Communion, I think that the issue is not disagreement over the church’s teaching on abortion or that the rejection of it could impact worthiness to receive Communion. No bishop is denying either of those claims. Rather there is a tendency among some Catholics to treat pastoral judgments about the application of these teachings as tantamount to heresy if they are not strict enough.

Often, someone taking this kind of position argues that the theological principles involved are so clear that they admit of only one practical conclusion: Communion must be denied. Thus, anyone who disagrees must really be unwilling to fully accept the underlying theological claim rather than making pastoral judgments about how best to remain close to someone who rejects or resists some parts of the church’s doctrine, as they say they are. But stated clearly in this way, the poisonous role of distrust becomes obvious. The conclusion drawn from distrust is effectively circular, guaranteeing that anyone who arrives at a different pastoral judgment on a matter of sufficient import must be assumed to be rejecting a theological truth.

Pope Francis: ‘I have never denied Communion to anyone.’
Gerard O’Connell

Pope Francis has a broader—and I would also say braver—vision of what being a pastor means. And I think that vision also has room for bishops, as pastors, to disagree with each other about the best way forward, either in general or in particular concrete circumstances. Pope Francis calls on pastors to trust the Holy Spirit, who leads them to care for their flocks “with the style of God.” By doing so, he also reminds the whole church that it is God, first and foremost, who reaches out to us with the “closeness, compassion and tenderness” that ought to shape the church’s pastoral care, especially for those who seem to be wandering away from the flock.