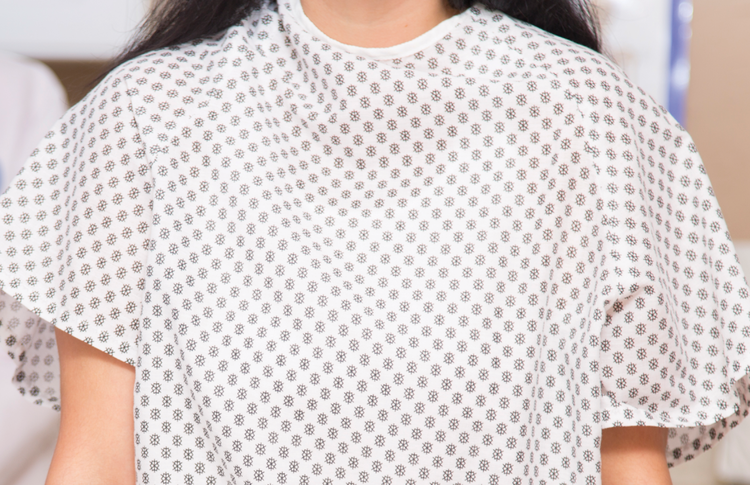 “Do you have any physical defect that would prevent you from having marital relations?”

There was an uncomfortable pause when my parish priest reached this item in our prenuptial questionnaire. After all, as he jokingly pointed out, we were not supposed to know the answer yet. And despite being in our mid-30s and coming from very different religious traditions, we didn’t. We laughed ruefully at this memory as we passed the parish office on a walk around our neighborhood the evening before the eight-month anniversary of our wedding. The true answer turned out to be discouraging.

I had been suffering all the symptoms of endometriosis for 20 years by the time I was married, but I had believed them to be nothing more than symptoms of being female, rather than of having a significant chronic disease. Like many Catholic girls, my sex education consisted of lectures on the theology of the body, natural family planning and “Humanae Vitae.” All the information I received about human sexuality from my parents, my parishes and my Catholic college education had been filtered through a prism of narrowly interpreted Catholic sexual ethics. In fact, I only began to suspect something was wrong when, sometime after deciding to propose to my husband, I bought a copy of The Vagina Bible, by the obstetrician and gynecologist Jen Guntner, and slowly realized that the pain I had considered normal for two decades was a cause for real concern.

Natural Family Planning can be hard and expensive to use. Can new tech help?
Simcha Fisher

My vague uneasiness turned to panic and then to despair in the weeks following our tiny pandemic wedding. We were married on a blazing hot day in June in front of 14 guests, almost all immediate family. We did not have a reception, a honeymoon or even wedding rings, but we were deliriously happy to have publicly celebrated our commitment to each other and to be able to start our life together, which we hoped would soon include children. Instead, we began an arduous journey of simply trying to make the mechanics of sex work. Because they didn’t.

After weeks of failure, I started making appointments with gynecologists. I felt enraged every time they recorded “dyspareunia” on my charts, because the problem was not pain during sex; the problem was that sex was physically impossible. The cause of this failure was apparently the agonizing cramps I had been suffering from for three days a month since I was 13, a pain that no amount of ibuprofen or hot water bottles could quell. Now doctors explained to me that my recurring pain had tortured the muscles of my pelvic floor, which were now primed to respond with tension and pain to any stimulus, unable to relax on their own.

I embarked on an all-consuming, multipronged campaign to undo the damage: weekly pelvic floor physical therapy, daily exercises at home, a three-month course of acupuncture and Chinese herbs and a rigorous anti-inflammatory diet that demanded that I give up dairy, gluten, sugar, alcohol, coffee, tea, processed foods, artificial preservatives and certain fruits and vegetables. I grieved hard.

We began an arduous journey of simply trying to make the mechanics of sex work. Because they didn’t.

My predicament is not unique. Researchers believe that around 10 percent of women suffer from endometriosis. It is estimated that 10 to 20 percent of women endure dyspareunia. Women can experience a host of medical conditions throughout their life cycle, from painful fibroids to miscarriage, which while widespread, are treated as taboo subjects. Too many girls and women experience the symptoms of these afflictions but do not receive the early diagnosis and interventions that could prevent further harm. Despite collapsing in public from my pelvic pain on multiple occasions, including while serving Mass as a teenage acolyte, I had never received medical attention for it until I was married. It was my husband’s concern for my suffering that finally empowered me to get help.

What troubles me now as much as the pain itself is the realization that the Catholic culture I grew up in contributed to my lack of diagnosis and treatment. Stigma about women’s embodied experience, the tendency to treat women’s bodies as a source of sexual temptation, and an excessive focus on sexual purity left me with an overwhelmingly negative attitude toward my own body and the possibility of my physical well-being. The exclusive use of patriarchal divine imagery undermined my sense of self-worth. I was made to feel that I should suffer silently and that doing so was somehow redemptive—or at least that doing otherwise would be shameful. Confronting all of this, along with feelings of failure as a new wife, has been an essential part of my healing.

I do not share this painful journey to take a side in the internecine controversies over the theology of the body, N.F.P. and “Humanae Vitae.” Rather, I am offering practical recommendations for how the church can better educate and serve women and girls in order to uphold the dignity of women’s embodied existence and diminish damaging stigmas. My hope is that these are beliefs and practices that Catholic parents, educators and ministers can embrace regardless of their ideological stances.

First, girls deserve to be given accurate biological information about their bodies from an early age. Girls should be taught the difference between their vulva and their vagina by parents and educators who can use those terms without blushing or flinching. If girls are to accurately report pain or other problems they are experiencing, they need the vocabulary to do it, without shame attached. Nursery terms for female genitalia serve only to protect adults from their own embarrassment.

Girls deserve to be given accurate biological information about their bodies from an early age.

Sex education should address the embodied existence of women in its fullness, not limited to intercourse, reproduction and fertility. Information should be provided on issues like breast health, chronic conditions like endometriosis and health issues that disproportionately affect women or are under-studied in women. Women need this information to be alert to challenges they may face, from troubling symptoms to a lack of medical data due to the under-representation of women in medical studies.

Second, girls and women deserve to be treated and talked about as independent persons whose dignity and well-being matter in their own right, not dependent on their bonds to others. The sexual health information that girls and women receive should not be limited to what pertains to bearing children or pleasing a spouse. Likewise, Catholic parents and educators need to avoid the unfortunate tendency to treat girls and women as if they do not have a pelvis until they are married; age-appropriate sex education at all stages of development is crucial. Sacramental preparation for marriage should address human sexuality in a holistic way, not limiting its discussion to the injunction to practice natural family planning. Vowed women religious deserve easy access to women’s health care, including routine screenings.

Speaking to and about women and girls as independent persons goes beyond health information and access to services. Catholic ministers should speak about vocation with a broader understanding of women’s contributions and possible life paths, not limited to marriage vows, bearing children or religious vows. The worth of a woman’s life and her growth in holiness is not dependent on making vows in a religious order or with a spouse; and her well-being, including her sexual health, matters for her own sake.

Women deserve to hear positive theological reflections on their embodied existence as women.

Third, girls and women deserve to hear positive theological reflections on their embodied existence as women. Catholic ministers ought to avoid repeating what I heard from some Sunday school and high school teachers—flawed patristic and medieval interpretations of the Genesis account of the Fall that suggest that pain in childbirth, and thus somehow all pain specific to women, is a just punishment for original sin. Likewise, soteriologies that focus on participating in the suffering of Christ should not be used to discourage women from voicing their experiences of pain and seeking help. “Offer it up!” should not replace warranted medical attention.

As theologians have argued, scriptural stories of women should be more extensively incorporated into the three-year Lectionary cycle, so that the roles of women in salvation history are not treated as inconsequential or subordinate. Moreover, Catholic ministers should regularly include feminine imagery of God and scriptural invocations of God as mother in public prayer, faith sharing and spiritual direction. Drawing on the richness of divine feminine images embedded in the Scriptures reinforces that, even as God has no biological sex or gender, women’s embodied experiences are as worthy of use for analogical speech about God as men’s. Women and men are equally made in the image and likeness of God.

What has helped me most in my journey of healing has been the willingness of other women to meet my vulnerability with their own stories of struggle. Too often, their stories also included delayed diagnosis and lack of treatment options due to inadequate education and stigma about women’s health. I am saddened to know that so many have suffered in silence for so long. But I am inspired by their openness and their own efforts to improve awareness and access to information for the next generation. That, and the unconditional love of my husband, gives me faith that the future can be better than the past.

Greer Hannan works in homeless services in Louisville, Kentucky. She holds a Master of Nonprofit Administration and a Master of Divinity.