In first interview since his July operation, Pope Francis says his life was saved (for the second time) by a nurse 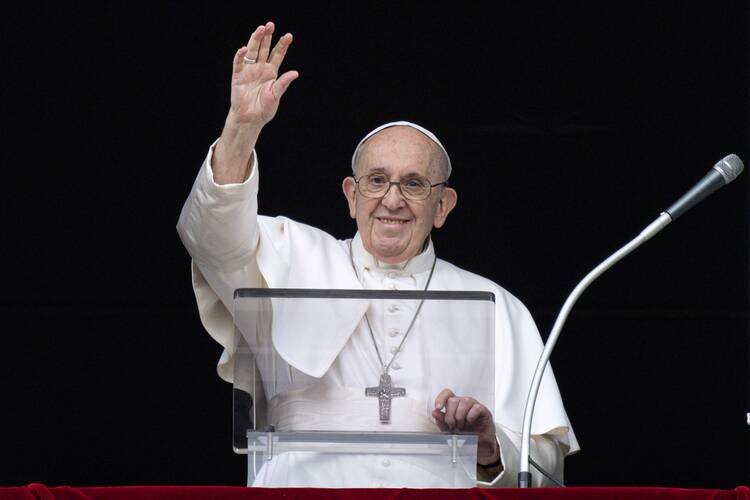 Pope Francis greets the crowd as he leads the Angelus from the window of his studio overlooking St. Peter's Square at the Vatican July 25, 2021. (CNS photo/Vatican Media)

“A nurse, a man with great experience, saved my life,” Pope Francis revealed in the first interview he has given since the operation on his intestine July 4. He gave the surprising news in a brief excerpt from the exclusive interview that he granted to COPE, one of the top Spanish radio networks, that will be broadcast on Wednesday morning, Sept. 1.

“It was the second time in my life that a nurse saved my life,” Francis added. He recalled the story of an Argentinian nurse who saved his life for the first time in 1957. He had spoken about this first nurse in an earlier interview with Nelson Castro, an Argentinian journalist and doctor, for the book La salud de los papas (The Health of the Popes), in which he explained that this nurse, drawing on her long experience, decided to double the dose of medicine the doctors had prescribed after they removed the top lobe of his right lung.

“A nurse, a man with great experience, saved my life,” Pope Francis revealed in the first interview he has given since the operation on his intestine July 4.

He will reveal the details of how the male nurse in the Vatican saved his life in the interview, which was obtained for the Spanish radio network by its Vatican correspondent, Eva Fernandez. The interview was conducted by COPE’s chief presenter, Carlos Hererra, last week at Casa Santa Marta, the Vatican guesthouse where Francis lives.

In the interview—given on the eve of his visit to Budapest and Slovakia from Sept. 12 to Sept. 15—the 84-year-old pope responded with humor to the question about his state of health: “I am still alive!” Commenting on the rumors and speculation in some Italian and international media that he might resign because of ill health, he said, “Always when the pope is ill there is a breeze or a hurricane about a conclave.”

“Pope Francis speaks about euthanasia in Spain, Afghanistan, immigration, Catalonia (region of Spain) and sends a message to the United States and Europe about what happened in Afghanistan,” Mr. Herrera said in an advance publicity spot for the interview, though he did not provide more detail. Two days after the interview, Francis spoke publicly about Afghanistan when addressing pilgrims in St. Peter’s Square at the noon Angelus on Sunday, Aug. 29. He appealed to all believers to help Afghans in need and called on all Christians to “fast, pray and do penance” for Afghanistan.

As news of the interview broke in Rome today, Aug. 30, one of the main Italian newspapers, La Repubblica, reported the results of a national survey that revealed that Pope Francis’ popularity rating is very high in Italy, and has risen 10 percent since 2018.

The pope appealed to all believers to help Afghans in need and called on all Christians to “fast, pray and do penance” for Afghanistan.

The survey, which interviewed people aged 18 and older and was conducted for the paper by Demos & Pi, reveals that three out of every four Italians trust Pope Francis. Significantly, the results show that this trust extends across the political spectrum, and it is shared by both churchgoers and those who do not attend church, though to different degrees. It reveals that 91 percent of Italians who attend church regularly trust the pope “much or very much.” Eighty-two percent of those who go to church occasionally likewise trust him, while 52 percent of those who are not practicing the faith do.

The survey was carried out July 12 to 14 as the pope was recovering from his operation, and comes in the wake of speculation—in sectors of the Italian media that have never been favorable to Francis—that the pope might resign because of ill health. There is no credible evidence for such rumors.

Commenting on the results of the survey, Ilvo Diamanti, an Italian sociologist and political scientist, recalled in La Repubblica that when Francis was elected pope, he enjoyed a record nearly 90 percent popularity rating because of the newness he brought in language and style. Mr. Diamanti said that his popularity decreased from 2016 onward, and eventually reached a low of 72 percent in 2018. This low came as a result of Francis’ support for migrants and for the poor of the world. Francis’ popularity also dipped due to financial scandals in the Vatican; these scandals have since led to sending a cardinal (Angelo Becciu), two other clerics and seven laypeople to trial, on charges that include embezzlement, fraud, corruption, money laundering and tampering with witnesses.

Mr. Diamanti noted, however, that Pope Francis’ credibility and Italians’ trust in him has grown during the Covid-19 pandemic, during which time he has given important spiritual leadership to people when it was most needed. For this reason, Mr. Diamanti concluded, “it is difficult to think that he could resign now.”