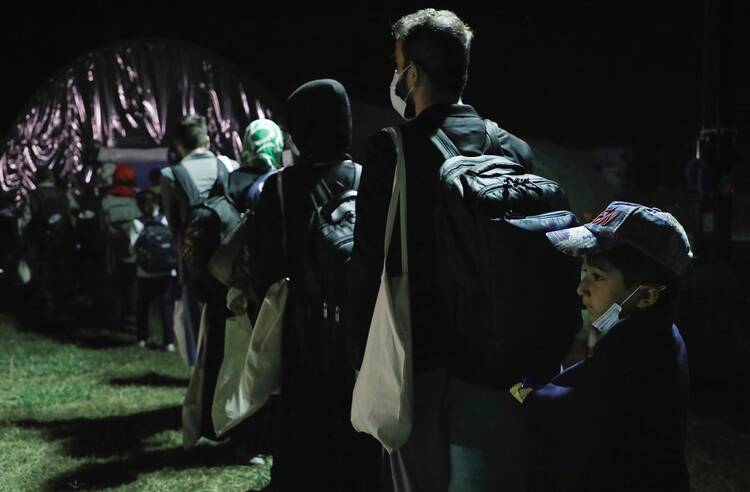 People who have been evacuated from Afghanistan arrive at Tirana International Airport in Tirana, Albania, on Aug. 27, 2021, after Taliban insurgents entered the Afghan capital of Kabul. (CNS photo/Florion Goga, Reuters)

Pope Francis expressed his “great concern” at the tragic situation in Afghanistan and prayed “for all those who died in the suicide bomb attack last Thursday” outside Kabul international airport.

He appealed “to everyone to continue to help the needy and to pray that dialogue and solidarity may lead to the establishment of a peaceful and fraternal living together and offer hope for the future of the country.”

He said Christians “cannot remain indifferent” in “historic moments such as this one,” and he called on them not only to give humanitarian assistance but “also pray and fast.”

He spoke about Afghanistan when he greeted hundreds of pilgrims at his Sunday audience in St. Peter’s Square at noon on Aug. 29.

“I participate in the suffering of all those who weep for the persons who lost their lives in the suicide attacks last Thursday, and (in the suffering) of those who are seeking help and protection,” Francis said.

“I entrust the dead to the mercy of God,” he added, referring to the 13 U.S. troops and the estimated 170 Afghan civilians who were killed in the attacks. Dozens more were wounded.

The pope thanked all “those who are seeking to help the people of that country put to such trial, especially the women and children.” A nation of approximately 40 million people, Afghanistan’s population has almost doubled during the last 20 years of war.

“In historic moments such as this we cannot remain indifferent. The history of the church teaches us that. As Christians, this situation calls for our commitment,” Pope Francis stated.

On Aug. 15, as the Taliban gained control of the country and were about to enter Kabul, Pope Francis said, “I join in the unanimous concern for the situation in Afghanistan. I ask you to pray with me to the God of peace so that the clamour of weapons might cease and solutions can be found at the table of dialogue. Only thus can the battered population of that country—men, women, elderly and children—return to their own homes, and live in peace and safety, in total mutual respect.”

I appeal to everyone to intensify prayer and to practice fasting.

Speaking at the 31st Special Session of the Human Rights Council last Tuesday, the Holy See reiterated the pope’s August 15 appeal when Msgr. John Putzer, chargé d'affaires of the Holy See’s Permanent Mission to the United Nations and other international organizations in Geneva, urged all parties “to recognize and uphold the respect for the human dignity and fundamental rights of every person, including the right to life, the freedom of religion, the right to freedom of movement and the right to peaceful assembly.”

“At this critical time,” the Vatican diplomat said, “it is of vital importance to support the success and safety of humanitarian efforts within the country, in a spirit of international solidarity, so as not to lose the progress that has been made, especially in the areas of healthcare and education.” He expressed the Holy See’s hope for a “peaceful and swift resolution to the ongoing tensions,” and its conviction that “inclusive dialogue” represents “the most powerful tool” to achieve the goal of peace.

He concluded by urging the entire international community to “move from declaration to action” by welcoming refugees “in a spirit of human fraternity.”

According to the U.N.H.C.R., the U.N. refugee agency, there are already 2.5 million registered refugees from Afghanistan, comprising the largest protracted refugee population in Asia, and the second-largest refugee population in the world. In recent weeks, thousands more have been attempting to flee the country, not only through the airlifts at Kabul airport, but also fleeing to neighboring countries including Iran and especially Pakistan. Some sources engaged in refugee work estimate that close to half a million Afghans could seek refuge in Pakistan before the end of the year. Before the events of August 15, there were already around 600,000 Afghans in Europe, but only half that number had been granted asylum.