In a historic first, a cardinal stood trial at the Vatican over involvement in a real estate scandal 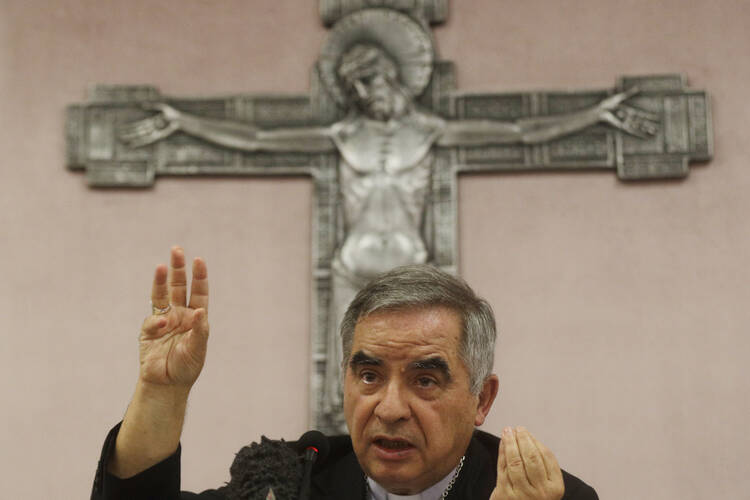 History was made in the Vatican this morning when the trial against Cardinal Angelo Becciu and nine others on charges including abuse of office, embezzlement, fraud, money laundering, as well as interference in the judicial process and witness tampering, opened in the new multipurpose room on the premises of the Vatican Museums.

It was the first time since the creation of the Vatican City State in 1929 that a cardinal has been brought to trial by a civil court on penal charges in the Vatican. Pope Francis had issued a motu proprio, or decree, earlier this year that made it possible for cardinals and bishops to stand trial before a civil tribunal in the Vatican, from which they previously had immunity.

The trial, held before three lay judges without a jury and under the president of the tribunal, Giuseppe Pignatone, opened the morning of July 27. Only two of the 10 accused were present: Cardinal Angelo Becciu, the former chief of staff to Pope Emeritus Benedict XVI and Pope Francis, and his former secretary, Msgr. Mauro Carlino. The lawyers for the other eight accused provided reasons for their absence.

History was made in the Vatican this morning when the trial against Cardinal Angelo Becciu and nine other persons on charges including abuse of office, embezzlement and fraud.

Today’s hearings ended just over seven hours later with the decision of the judges to adjourn it until Oct. 5 to allow the defense lawyers to receive and study all the documentation, as they had requested many times in their statements.

Cardinal Becciu, wearing clerical attire and looking tranquil, told journalists in the courtroom afterward: “I am here in obedience to the pope. I am here. I am serene, I feel tranquil, and I am confident that the judges will recognize my innocence.” He told America that he was confident he would be vindicated. “We will get through,” he said. The cardinal, who resigned his rights as a cardinal at the pope’s request in September but retained his title, has always insisted he is innocent.

The first Italian broker in the case, Raffaele Mincione, was not present. His lawyers explained that he has taken a case against the Vatican in London High Court and does not recognize the Vatican as the proper place for his trial. He got the Secretariat of State to invest a significant sum of money in his Athena Capital Fund for the purchase of a 45 percent share in 60 Sloane Avenue, London, that he owned, the purchase of which is at the heart of the trial.

Only two of the 10 accused were present: Cardinal Angelo Becciu, the former chief of staff to Pope Emeritus Benedict XVI and Pope Francis, and his former secretary, Msgr. Mauro Carlino.

After the Vatican lost a significant amount of money on the investment, the Secretariat of State under the new chief of staff, Archbishop Pena Parra, decided that the only way forward was to buy the rest of the shares of the property from Mr. Mincione, and so they brought in Mr. Torzi, another Italian broker. When the Vatican’s Secretariat of State requested money from the Vatican Bank to do this, it triggered an investigation.

Mr. Mincione’s lawyers revealed that they discovered, in reading the documentation, that the Vatican prosecutors had issued a warrant for his arrest. At the end of today’s trial, the president of the tribunal revoked the arrest warrant for Mr. Mincione.

The second Italian broker, Gianluigi Torzi, could not attend, his lawyers said, because he is under house arrest in London. He faces an extradition request from Italy and risks arrest if he enters the country. He was brought in by the Secretariat of State to assist in the buyout of the London property from Mr. Mincione and charged the Vatican 15 million euros to complete the deal.

Cecilia Marogna, the only woman on trial, who was hired by Cardinal Becciu to carry out intelligence work to help liberate kidnapped missionaries, was not present. She was charged with embezzlement after a large portion of the 500,000 Euros she was paid for intelligence work was spent on luxury goods. Her lawyers explained that she is under interrogation by the Italian authorities at this moment and so could not attend.

The lawyers asked that the trial be postponed because they had not received all the relevant documentation.

This morning, the judges first heard challenges from some 14 of the more than 24 lawyers defending the 10 accused. The lawyers asked that the trial be postponed because they had not received all the relevant documentation, without which they would not be able to defend their clients. In fact, most had already received 28,000 pages of documentation, but some documents were not legible, and they still had to receive much more. They also charged that they had not had enough time to study all the material. The Vatican prosecutors, in their presentation, assured the defense lawyers that they would receive all the relevant documentation and insisted that there was no intention to withhold any information.

Several lawyers for the defense charged that the pope had approved legislation specifically to make this trial possible and protested that this had in effect created a “special tribunal” that did not guarantee the fundamental rights of the accused. The Vatican prosecutors, in response, explained that the pope, as supreme legislator, has actually changed the law; his changes are not mere “administrative measures.”

One of the Vatican lawyers also underlined the uniqueness of this multi-person trial and reminded the Italian lawyers that the Italian state had also made changes in legislation to enable similar trials against the mafia and those involved in terrorist activities to take place.

It was noticeable during the trial that the Italian lawyers for the accused tended to make arguments from the present Italian judicial system and legislation, but the Vatican chief prosecutor, Alessandro Didi, argued that they were mistaken in doing so since the Vatican’s own legislation is different in many ways. Furthermore, he said, the Vatican legislation must also be interpreted in the light of canon law.

The chief prosecutor, Mr. Didi, explained that canon law allowed this privilege and said the Vatican legislation should be interpreted in this light.

The lawyers for Cardinal Becciu charged that they had not received a transcription of the deposition of Msgr. Alberto Perlasca, who has effectively turned into a state witness and was not on trial today. He was the head of the administrative office when then-Archbishop Becciu was chief of staff. But, for some reason, he gave important evidence against the cardinal with whom he had worked closely for many years. The cardinal’s lawyers seemed to suggest that he did so to avoid prosecution.

The cardinal’s lawyers charged that Monsignor Perlasca was interrogated by the Vatican prosecutors five times, but only the first time with his defense lawyer present. The Vatican chief prosecutor explained that the monsignor had come forward voluntarily, first with his lawyer. But in subsequent hearings he spoke without a lawyer, at his own request, which the prosecutor accepted. At the end of today’s hearing, the cardinal told journalists that “with sadness” he has instructed his lawyers to file a defamation case against the monsignor.

The cardinal’s lawyers also charged that the prosecutors had interrogated Msgr. Oscar Cantoni, the bishop of Como, at the bishop’s residence, thereby breaking the Italian law since his residence is not part of the Vatican’s extra-territorial territory. They asked for it to be rendered null.

The chief prosecutor, Mr. Didi, explained that canon law allowed this privilege and said the Vatican legislation should be interpreted in this light.

America’s Vatican correspondent was present at today’s hearing and learned from one of the cardinal’s lawyers that 250 witnesses will be called when the trial resumes in October.

The other accused who were absent from today’s hearings and judged to be “in contempt of the court” were:

Enrico Grasso, the financial agent who managed the Secretariat of State’s investments for roughly three decades, and is charged with embezzlement, corruption, extortion, money laundering, falsification of public acts committed as a private person and falsification of private texts.

Nicola Squillace, a lawyer involved in the Vatican negotiations to get Gianluigi Torzi to buy out the property from Mincione, who is accused of fraud, misappropriation of funds and money laundering.

Fabrizio Tirabassi, a low-level Vatican official in the Secretariat of State’s administrative office, and protagonist in this affair, who is accused of corruption, extortion, embezzlement, fraud and abuse of office.

Tomasso Di Ruzza, the former director of the Financial Information Authority, the Vatican’s financial watchdog, who is charged with embezzlement, abuse of office and violation of the secret of office.

René Brülhart, a Swiss lawyer who served as president of the board of directors of the Vatican’s Financial Information Authority and is charged with abuse of office.

It is not yet clear if these eight, who were absent today, will also be present in court when the trial resumes on Oct. 5.