Catholics’ views on abortion are deeply scriptural, as well as historical and philosophical 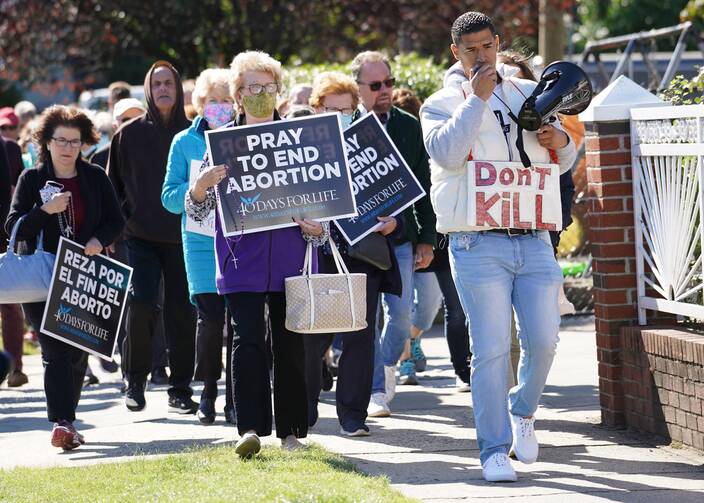 Pro-life advocates participate in a rosary procession on Sept. 19, 2020, in Hempstead, N.Y. (CNS photo/Gregory A. Shemitz)

I often notice misconceptions about Catholic tradition in abortion debates and opinion pieces in the popular press. One recent example of this was Garry Wills’s essay in The New York Times on June 27; while it was scintillating reading, it did not engage Catholic tradition well.

Mr. Wills points out that nowhere in the Gospels does Jesus specifically prohibit abortion. This is true. Yet Mr. Wills articulates an extremely limited way of reading Scripture that emphasizes only the text, and printed words cannot tell us how Christians have heard those words and lived them out. We need to consider the whole of Catholic life, especially history and philosophy.

Mr. Wills articulates an extremely limited way of reading Scripture. We need to consider the whole of Catholic life, especially history and philosophy.

Historically, a question we might ask is: Why are there records of early Christian communities prohibiting abortion? The second-century Christian instruction manual known as the Didache, originally written in Greek, tells Christians that “There are two ways, one of life and one of death.” The “way of life” involves following the commandments to love God and love neighbor, and the Didache’s author spells out what it means to love neighbor: “You shall not murder a child by abortion nor kill that which is begotten.” That is, even if Jesus does not specifically prohibit abortion, the earliest Christian communities used Jesus’ commandments about loving our neighbor to protect the lives of the most vulnerable among us.

Christians must demonstrate compassion toward mothers, as well, including those considering abortion. But this should mean helping them to realize there is no necessity to kill another human being, as well as fostering conditions that enable bearing that new life. Recall that Jesus is asked: “Who is my neighbor?” For Catholics, the answer always involves some consideration of who the poorest, most vulnerable people are. Sometimes they will be immigrants, or people experiencing bias because of race or gender, or people with disabilities. Sometimes they will be the unborn.

As for philosophy, we might consider natural law tradition. Natural law is sometimes understood as merely what a reasonable person rationally determines about the world. That view might lead someone like Mr. Wills to argue that because some reasonable people think abortion is permissible, natural law makes a poor argument against abortion (or makes the bishops “wrong about abortion”).

Natural law in Catholic tradition does not simply derive from natural reason. It also connects to Christian heritage.

However, natural law in Catholic tradition is not derived from natural reason alone. It also connects to Christian heritage. Catholics view natural law as the light of reason that all people have because human beings are made in God’s image, connecting us to God’s creation and God’s plan. Further, the 13th-century scholar Thomas Aquinas argued that natural law is “the rational creature’s participation in eternal law.” The phrase “participation in eternal law” connects us and our reasoning to God’s law. God’s law provides a measure against which we view our natural reasoning. Of course, because we are merely human, we only see eternal law haltingly, but we find glimpses in Scripture. We know, for example, the great significance life itself has to the creator of the universe.

Still, Catholics also make use of natural law without direct reference to God’s revelation. To develop arguments that appeal to human reason and philosophical understanding enables us to communicate with people who do not share Christian beliefs but who nonetheless might share our convictions about the significance of human life. Thus, atheists like Nat Hentoff and Christopher Hitchens famously opposed abortion, as do many secular pro-life groups.

That said, though natural law relates to human reason, people do not always find the rational arguments of natural law arguments to be compelling or self-evident. Another way to understand natural law is that it identifies what helps us flourish as human beings. A natural law argument against racism is not only stated as “we should know better as reasonable people” but also as “racism and racist acts impede human flourishing.” Non-Christians may find common ground in thinking about what enables all of us to be better people.

Another way to understand natural law is that it identifies what helps us flourish as human beings. Non-Christians may find common ground in thinking about what enables all of us to be better people.

Finally, there are three more specific philosophical arguments that, in part, use natural law and that feature in abortion debates.

One engages with the idea of intention, which is how we make a distinction between something that happens “naturally” and something that is a sinful action—that is, evil deliberately chosen by a human being. We know that all humans die, for we are mortal beings; we also know it is a very different thing for me to die in my sleep than to die because someone shot me on purpose. Similarly, while many pregnancies end in miscarriages (which in medical-speak are named spontaneous abortions, not the same as intentional abortions), this is a tragedy, but it is not the same as a directly intended killing of a child in the womb.

“Intention” connects to a second philosophical concept important in Catholic understanding of abortion: the principle of double effect. This principle derives from another area of consideration about taking innocent human life (the “just war” principle), and it enables people to think through tough life-and-death situations where there might be both good and bad effects stemming from one action. Using the principle of double effect requires that the following four criteria are met in order for the act to be deemed permissible: 1) the act that we might commit is not itself evil; 2) in doing the act, we are not intending the evil effect; 3) the good effect of the action must be directly caused; 4) the good effect is proportionally good compared to the bad effect.

The main aim always is to avoid the risk and evil of murdering another human being. Christian love of neighbor, natural law and God’s eternal law all figure in the desire not to murder.

The principle of double effect can be used in a tough, tragic case such as a pregnant woman early in her second trimester who finds herself with stage-four uterine cancer. For uterine cancer, most Catholic bioethicists have come to a general consensus that treating the cancer, though it results in the death of the baby, meets the criteria for the principle of double effect. That is, the act (removing the diseased uterus, which would be a treatment possibility even if the woman were not pregnant) is not evil; 2) the intent is to treat the cancer; 3) the direct effect of the act is good in that it aids in treating cancer; and 4) saving the life of the mother is proportionately good compared to evil of both mother and baby dying. The principle of double effect can be used in similar tough cases, such as ectopic pregnancies, within certain parameters.

But when considering intention, the main aim always is to avoid the risk and evil of murdering another human being. Christian love of neighbor, natural law and God’s eternal law all figure in the desire not to murder.

The third philosophical concept is the personhood debate, which arose in the 1960s and 1970s related to end-of-life care (i.e., at what point is a person not a person, so that a ventilator might be unplugged?). This debate quickly became integral to beginning-of-life debates as well.

Note that in this debate, “person” is not the same as “human.” To my knowledge, there is no biologist who would try to say that an embryo or fetus living in a human uterus is not human. But the question of when a human is a person means defining what is characteristic of persons but not of non-persons. People have offered multiple suggestions for the defining characteristic: dignity, being made in the image of God, possessing a trait like ability to reason, or ability to be independent.

Many personhood debates relate to questions of independence: When is the point at which a fetus can be independent of its mother? At what point is a fetus viable outside the womb? Naming the time when a person is “independent” cannot be easily done. If a baby can survive with oxygen and incubation, is that simply dependence on a machine? Babies cannot feed themselves when they are first born, so does that make them dependent? Begin thinking about this too much, and we begin to recognize we are all, to some extent, dependent on one another. This is Jesus’ commandment to love our neighbor in a different key.

That brings us full circle to why Catholics see abortion as wrong—scripturally, historically and philosophically. Abortion prioritizes the deliberate taking of a very vulnerable human life, in contradiction to the love that Jesus preaches. 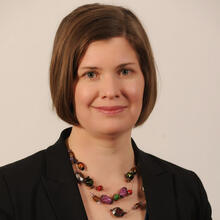 Jana Bennett Jana Bennett is a professor of religious studies at the University of Dayton, co-editor of the blog catholicmoraltheology.com, and author of the book Singleness and the Church (Oxford University Press).
Show Comments ()
Join the conversation: Login or create an account
Before you can comment, you need to update your profile to include your first and last name, as required in our comments policy. Then reload this page and you'll be set up for commenting. Update your profile