Pope Francis: Encounter with Jesus is more important than all of the commandments 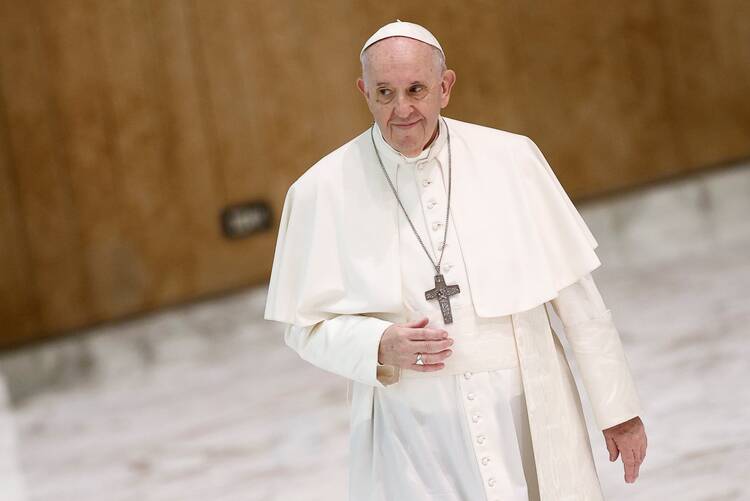 Pope Francis smiles as he arrives for his general audience in the Vatican's Paul VI hall Aug. 11, 2021. (CNS photo/Vatican Media)

Below is the text of Pope Francis’ weekly Wednesday audience, delivered on Aug. 11, 2021.

“Why the law?” (Gal 3:19). This is the question that we want to deepen today, continuing with St. Paul, to recognize the newness of the Christian life enlivened by the Holy Spirit. But if the Holy Spirit exists, if Jesus exists who redeemed us, why the law? And this is what we must reflect on today. The Apostle writes: “If you are led by the Spirit, you are not under the law” (Gal 5:18). Instead, Paul’s detractors sustained that the Galatians had to follow the Law to be saved. They were going backward. They were nostalgic for times gone by, of the times before Jesus Christ. The Apostle is not at all in agreement. These were not the terms he had agreed on with the other Apostles in Jerusalem. He remembers very well Peter’s words when he said: “Why do you make trial of God by putting a yoke upon the neck of the disciples which neither our fathers nor we have been able to bear?” (Acts 15:10). The dispositions that had emerged in that ‘first council’ – the first ecumenical council was the one that took place in Jerusalem – and the dispositions that emerged were very clear. They said: “For it has seemed good to the Holy Spirit and to us [the apostles] to lay upon you no greater burden than these necessary things: that you abstain from what has been sacrificed to idols [that is, idolatry] and from blood and from what is strangled and from unchastity” (Acts 15:28-29). Some of the things touched on worshiping God, and idolatry, and some things regarding the way of understanding life at that time.

We Christians journey through life looking toward a promise.

When Paul speaks about the Law, he is normally referring to the Mosaic Law, the law given by Moses, the Ten Commandments. It was in relationship to, it was on the way, it was a preparation, it was related with the Covenant that God had established with his people. According to various Old Testament texts, the Torah – that is, the Hebrew term used to indicate the Law – is the collection of all those prescriptions and norms the Israelites had to observe by virtue of the Covenant with God. An effective synthesis of what the Torah can be found in this text of Deuteronomy, that says this: “The Lord will again take delight in prospering you, as he took delight in your fathers, if you obey the voice of the Lord your God, to keep his commandments and his statutes which are written in this book of the law, if you turn to the Lord your God with all your heart and with all your soul” (30:9-10). So, the observance of the Law guaranteed to the people the benefits of the Covenant and guaranteed a particular bond with God. This people, this population, this person, they are connected with God and they make it seen, this union with God, in the fulfillment, in the observance of the Law. In making the Covenant with Israel, God offered them the Torah, the Law, so they could understand his will and live in justice. We have to think that at that time, a Law like this was necessary, it was a tremendous gift that God gave his people. Why? Because at that time paganism was everywhere, idolatry was everywhere and human behavior was a result of idolatry. Because of this, the great gift God gave his people is the law, so they could persevere. Several times, especially in the prophetic books, it is noted that not observing the precepts of the Law constituted a real betrayal of the Covenant, provoking God’s wrath as a consequence. The connection between the Covenant and the Law was so close that the two realities were inseparable. The Law is the way a person, a people express that they are in covenant with God.

So, in light of all this, it is easy to understand how well those missionaries who had infiltrated the Galatians found such fair game by sustaining that adhering to the Covenant also included observing the Mosaic Law as it was done at that time. Nevertheless, precisely regarding this point, we can discover St. Paul’s spiritual intelligence and the great insights he expressed, sustained by the grace he received for his evangelizing mission.

The encounter with Jesus is more important than all of the commandments.

The Apostle explains to the Galatians that, in reality, the Covenant and the Law are not linked indissolubly – the Covenant with God and the Mosaic Law. The first element he relies on is that the Covenant established by God with Abraham was based on faith in the fulfillment of the promise and not on the observance of the Law that did not yet exist. Abraham began his journey centuries before the Law. The Apostle writes: “This is what I mean: the law, which came four hundred and thirty years afterward [with Moses], does not annul a covenant previously ratified by God [with Abraham when he called him], so as to make the promise void”. This word is very important. The people of God, we Christians, we journey through life looking toward a promise. The promise is what attracts us; it attracts us to move forward toward the encounter with the Lord. “For if the inheritance is by the law, it is no longer by promise [that came before the Law, the promise to Abraham]; but God gave it to Abraham by a promise” (Gal 3:17-18), then the Law came four hundred and thirty years after. With this reasoning, Paul reached his first objective: the Law is not the basis of the Covenant because it came later. It was necessary and just, but prior to that there was the promise, the Covenant.

Such an argument disqualifies all those who sustain that the Mosaic Law was a constitutive part of the Covenant. No, the Covenant comes first, and the call came to Abraham. The Torah, the Law, in fact, was not included in the promise made to Abraham. Having said this, one should not think, however, that St. Paul was opposed to the Mosaic Law. No, he observed it. Several times in his Letters, he defends its divine origin and says that it possesses a well-defined role in the history of salvation. The Law, however, does not give life; it does not offer the fulfillment of the promise because it is not capable of being able to fulfill it. The Law is a journey, a journey that leads toward an encounter. Paul uses a word, I do not know if it is in the text, a very important word: the law is the “pedagogue” toward Christ, the pedagogue toward faith in Christ, that is, the teacher that leads you by the hand toward the encounter (cf. Gal 3:24). Those who seek life need to look to the promise and to its fulfillment in Christ.

Dear brothers and sisters, this first exposition of the Apostle to the Galatians presents the radical newness of the Christian life: All those who have faith in Jesus Christ are called to live in the Holy Spirit, who liberates from the Law and, at the same time, brings it to fulfillment according to the commandment of love. This is very important. The Law leads us to Jesus. But one of you might say to me: “But, Father, just one thing: does this mean that if I pray the Creed, I do not need to observe the commandments?” No, the commandments are valid in the sense that they are “pedagogues” [teachers] that lead you toward the encounter with Christ. But if you set aside the encounter with Jesus and want to go back to giving greater importance to the commandments, this was the problem of these fundamentalist missionaries who had infiltrated the Galatians to confuse them.