The U.S. bishops’ document on the Eucharist could benefit young Catholics 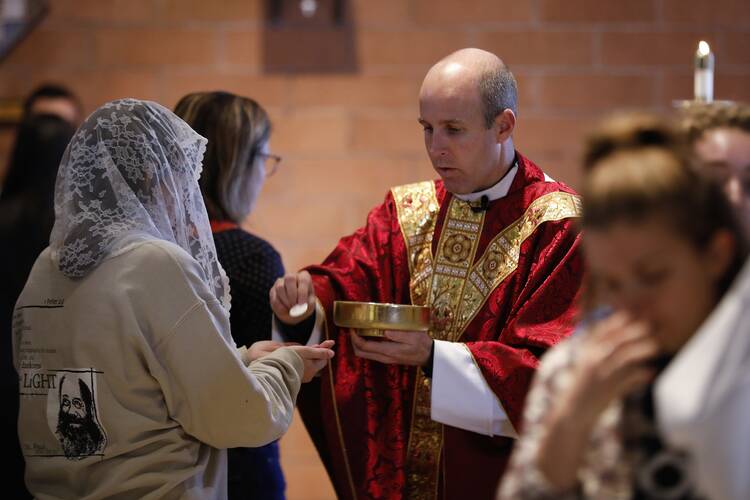 Editor’s note: This article is part of The Conversation with America Media, offering diverse perspectives on important and contested issues in the life of the church. Read others view on the reception of the Eucharist here.

A seemingly innocuous Facebook post, from a Dominican pastor in the Midwest who has served in campus ministry for the past five years, recently caught my eye. He commented on his own students and their discernment of religious life, writing “for a 3rd straight year, a man from our campus ministry will be entering our novitiate.”

When I reached out to learn more, the pastor told me that the Eucharist was at the center of each man’s journey. He added: “In the past seven years, we have had (to my counting) 11 men and women enter religious life or the seminary. All of whom were actively involved in our ministry, especially Mass and prayer before the Blessed Sacrament.”

The Eucharist, when experienced in a personal and authentic manner, is important in ways beyond a few men discerning religious life. For all types of vocation, the Eucharist is powerful, increasing one’s fidelity and devotion. Participating in the eucharistic liturgy as well as adoration of the Blessed Sacrament connects one more personally to the Lord and simultaneously to the Body of Christ.

For all types of vocation, the Eucharist is powerful, increasing one’s fidelity and devotion.

So it makes sense then, that the U.S. Conference of Catholic Bishops is about to draft a teaching document on the Eucharist. Archbishop Samuel Aquila, writing in America, called for “eucharistic coherence,” explaining, “We who profess the faith of the church must live as the church commands us…. To approach the Eucharist otherwise is to condemn ourselves at the altar of the Lord.” He argues that at present, the church rarely calls out the sin that many of us live with, adopting instead a “near-exclusive pedagogy of acceptance.” This results in a murky concept of personal sin and only weakens the church. Countless laymen and women are receiving the Eucharist when the condition of their soul, a result of grave sin, prohibits them from doing so. But they are likely unaware of this reality.

Still, some worry that the church in the United States will now turn the Eucharist into a source of division. They feel that, while a document on the Eucharist may appear to be valuable on its face, its motivation is political.

From the perspective of campus ministry, a couple of observations may help us navigate the next few months as the bishops prepare the document on the Eucharist.

The teaching document would benefit from careful wording perceived by young adults as inviting greater eucharistic participation and reverence.

First, most college students have no idea what the U.S.C.C.B. is. Most students have little sense of who their local bishop is, much less what the U.S.C.C.B. does. Writing recently in America, John T. Russo, the director of digital media for the diocese of Bridgeport, Conn., worried that the recent bishops’ meeting, and the debate over whether to issue a teaching document on the Eucharist, “was a display that did not align with the concerns of most young people the church is trying to reach.”

But if the document is adopted, its implementation will be at the local level. If it is explained at all, it will be through the caring words of an adult on campus. That implementation might be as straightforward as a statement at the beginning of Mass summarizing the teaching on the Eucharist and its implications for receiving Communion. More likely, the contents of the document may be unwrapped through podcasts, homilies and one-on-one conversations. Most college students attending Mass on campus won’t know the title of the document, much less the number of bishops who voted for or against it. What they will experience is a community centered around the Eucharist, and that will be what matters most.

For the church to live in eucharistic coherence, we must be willing to challenge Catholics persisting in grave sin.
Samuel J. Aquila

Second, accompaniment matters more than ever. Pope Francis has argued that the church of 2021 ought to focus more on walking with young people than talking at them. Recent data from The National Dialogue, a collaboration between several national Catholic organizations that concluded this past year, supports this: Young people want witnesses and words. The Dialogue surveyed hundreds of young people in order to gauge their perceptions of the church. More often than not, they expressed a desire for a church that listens to and accompanies them.

Timothy O’Malley, the academic director of the Notre Dame Center for Liturgy, provides a valuable contribution to the debate over the bishops’ upcoming document when he writes, “Even catechesis around the doctrine of real presence is insufficient for a robust affiliation with the Eucharistic Church.” This isn’t to say that the document from the bishops will be unimportant. Rather, the point is that it would benefit from careful wording perceived by young adults as inviting greater eucharistic participation and reverence, rather than as narrowing the path toward worthy reception of the sacrament.

The bishops’ work will also benefit from the multi-year Eucharistic Revival initiative, part of the U.S.C.C.B.’s 2021-24 strategic plan, expected to be an experiential re-introduction to the Eucharist. And if it’s true that college students desire eucharistic experience as much as doctrinal clarity, the effort toward “eucharistic coherence” might result in both vocational vibrancy and a healthier church. 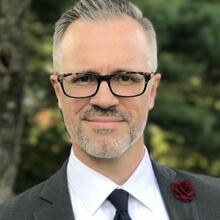 Michael St. Pierre is the executive director of the Catholic Campus Ministry Association.

@mikekstpierre
Show Comments ()
Join the conversation: Login or create an account
Before you can comment, you need to update your profile to include your first and last name, as required in our comments policy. Then reload this page and you'll be set up for commenting. Update your profile