Pope Francis: Those who insist on ‘keeping the truth’ over preaching the Gospel have always threatened the church 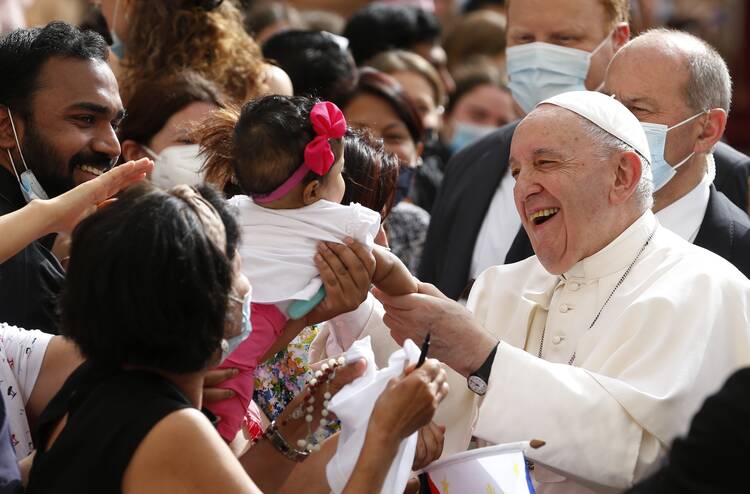 Pope Francis greets a baby during his general audience in the San Damaso Courtyard of the Apostolic Palace at the Vatican June 23, 2021. The pope began a new series of audience talks focused on St. Paul's Letter to the Galatians and its lessons about evangelization, faith and freedom. (CNS photo/Paul Haring)

Below is the text of Pope Francis’ weekly Wednesday audience, delivered on June 23, 2021, the twelfth Wednesday in Ordinary Time.

After the long itinerary dedicated to prayer, today we begin a new cycle of catechesis. I hope that with this itinerary of prayer we have succeeded in praying a little better, praying a little more. Today I would like to reflect on some themes proposed by the Apostle Paul in his letter to the Galatians. It is a very important letter, I would even say decisive, not only for getting to know the Apostle better, but above all in considering some topics that he addresses in depth, showing the beauty of the Gospel. In this letter, Paul makes many biographical references that allow us to understand his conversion and his decision to place his life at the service of Jesus Christ. He also deals with some very important themes for the faith, such as freedom, grace and the Christian way of life, which are extremely topical since they touch on many aspects of the life of the Church today. This letter is very topical. It seems to be written for our times.

Paul created small communities that are the leaven of our Christian culture today.

The first feature that emerges from this letter is the great work of evangelisation carried out by the Apostle, who had visited the communities of Galatia at least twice during his missionary journeys. Paul addresses the Christians of that territory. We do not know exactly which geographical area he is referring to, nor can we state with certainty the date on which he wrote this letter. We do know that the Galatians were an ancient Celtic population who, after many vicissitudes, had settled in the extensive region of Anatolia that had as its capital the city of Ancyra, today Ankara, the capital of Turkey. Paul relates only that, due to illness, he was obliged to stay in that region (cf. Gal 4:13). St. Luke, in the Acts of the Apostles, finds instead a more spiritual motivation. He says that “they went through the region of Phry’gia and Galatia, having been forbidden by the Holy Spirit to speak the Word in Asia” (16:6).

The two facts are not contradictory: Rather, they indicate that the path of evangelisation does not always depend on our will and plans, but requires a willingness to allow ourselves to be shaped and to follow other paths that were not foreseen. Among you there is a family who greeted me: They say that they have to learn Latvian, and I don’t know what other language, because they will go as missionaries to that land. The Spirit continues today to bring many missionaries to leave their homeland and to go to another country to carry out their mission. What we do see, however, is that in his indefatigable work of evangelisation, the Apostle succeeded in founding several small communities scattered throughout the region of Galatia.

Paul, when he arrived in a city, in a region, did not construct a great cathedral immediately, no. He created small communities that are the leaven of our Christian culture today. He began by making small communities. And these small communities grew, they grew and they went forward. Today, too, this pastoral method is used in every missionary region. I received a letter last week, from a missionary in Papua New Guinea, telling me that he is preaching the Gospel in the forest, to people who do not even know who Jesus Christ was. It is beautiful! One begins by forming small communities. Even today this method of evangelisation is that of the first evangelisation.

It is precisely the way of the evil one: of these people who divide, who do not know how to build.

What we ought to note is Paul's pastoral concern, which is all aflame. After founding these Churches, he became aware of a great danger to their growth in faith—the pastor is like a father or a mother who is immediately aware of dangers to their children. They grow, and dangers present themselves. As someone said, “The vultures come to wreak havoc in the community.” Indeed, some Christians who had come from Judaism had infiltrated these churches, and began to sow theories contrary to the Apostle’s teaching, even going so far as to denigrate him. They began with doctrine—“No to this, yes to that,” and then they denigrated the Apostle. It is the usual method: undermining the authority of the Apostle. As we can see, it is an ancient practice to present oneself at times as the sole possessor of the truth, the pure, and to aim at belittling the work of others, even with slander.

These opponents of Paul argued that even the Gentiles had to be circumcised and live according to the rules of the Mosaic Law. They went back to the previous observances, those that had been superseded by the Gospel. The Galatians, therefore, would have had to renounce their cultural identity in order to submit to the norms, prescriptions and customs typical of the Jews. Not only that, those adversaries argued that Paul was not a true apostle and therefore had no authority to preach the Gospel. Let us think about how in some Christian communities or dioceses, first they begin with stories, and then they end by discrediting the priest or the bishop. It is precisely the way of the evil one: of these people who divide, who do not know how to build. And in this letter to the Galatians we see this process.

It is the path of meek and obedient trust that leads forward in the certainty that the Holy Spirit works in the Church in every age.

The Galatians found themselves in a situation of crisis. What were they to do? To listen and follow what Paul had preached to them, or to listen to the new preachers who accused him? It is easy to imagine the state of uncertainty that filled their hearts. For them, having come to know Jesus and believe in the work of salvation accomplished by His death and resurrection was truly the beginning of a new life, a life of freedom. They had embarked on a path that allowed them to be free at last, despite the fact that their history was interwoven with many forms of violent slavery, not least that which had subjected them to the emperor of Rome. Therefore, faced with criticism from the new preachers, they felt lost and they felt uncertain about how to behave: “But who is right? This Paul, or these people who now come teaching other things? Who should I listen to?” In short, there was a lot at stake!

This situation is not far removed from the experience of many Christians today. Indeed, today too there is no shortage of preachers who, especially through the new means of communication, can disturb communities. They present themselves not primarily to announce the Gospel of God who loves man in Jesus, Crucified and Risen, but to insist, as true “keepers of the truth”—so they call themselves—on the best way to be Christians. And they strongly affirm that the true Christianity is the one they adhere to, often identified with certain forms of the past, and that the solution to the crises of today is to go back so as not to lose the genuineness of the faith. Today too, as then, there is a temptation to close oneself up in some of the certainties acquired in past traditions. But how can we recognise these people?

For example, one of the traces of this way of proceeding is inflexibility. Faced with the preaching of the Gospel that makes us free, that makes us joyful, these people are rigid. Always the rigidity: You must do this, you must do that... Inflexibility is typical of these people. Following the teaching of the Apostle Paul in his letter to the Galatians will help us to understand which path to follow. The path indicated by the Apostle is the liberating and ever-new path of Jesus, Crucified and Risen; it is the path of proclamation, which is achieved through humility and fraternity—the new preachers do not know what humility is, what fraternity is. It is the path of meek and obedient trust—the new preachers know neither meekness nor obedience. And this meek and obedient way leads forward in the certainty that the Holy Spirit works in the Church in every age. Ultimately, faith in the Holy Spirit present in the Church carries us forward and will save us.