Mourning dozens of priests, Mexico’s church seeks to move forward from the pandemic 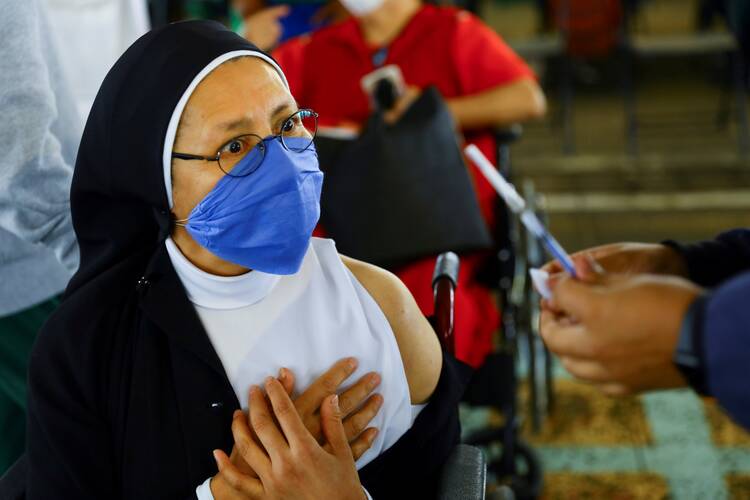 Torrential rains lashed the streets of Tlaxpana, a working-class neighborhood in Mexico City, during a recent weekday night. As Mexico City slowly returned to normal after partial lockdowns and stay-at-home measures during the last 18 months, music blared from speakers at small market stands and crowds thronged at restaurants at the side of the Circuito Interior road, one of the main traffic arteries around the city’s center.

Amid the music and roaring traffic of rush hour, a group of 15 worshipers quietly entered the San Antonio de Padua church, which overlooks Circuito Interior, through a small side door. They were preparing to celebrate Mass in this modernist church building, held up by several massive white arches designed by the same architect responsible for the capital’s famous Sports Palace.

It was a small group, but the parishioners were relieved they could be there at all. As the Covid-19 pandemic raged and killed tens of thousands of people in Mexico City alone, the parish was almost completely shut down. Most activities were moved online to prevent the spread of the coronavirus.

But those precautions were not enough. On Jan. 20, the Rev. Jorge Pancich died of Covid-19 at age 51. He had been San Antonio de Padua’s parish priest for five years. He was well liked by the local community, and his death was a sudden and devastating blow to Tlaxpana.

Covid-19 claimed the lives of more than 230,000 Mexicans by the end of June, but even the federal government acknowledges that the real number is significantly higher.

“It was a huge loss for all of us. He was a kind man, someone who took care of his community,” María Elba, an elderly woman attending the Mass, said. “We felt like we were orphaned by his death.”

The Rev. Pedro Lira was named his successor one month after his death. He had known Father Pancich well.

“His passing came as a shock. He had still celebrated Mass just the Sunday before,” he told America. “I saw him when he was sick and in his bed, shortly before he died.” To suffer such an acute and sudden loss “was very painful,” he said.

Overwhelmed by the number of dead, “the crematoriums did not have the capacity to handle his body,” Father Lira said, “so it had to stay here for a day and a half until it could be cremated.”

Tlaxpana is among hundreds of communities across Mexico dealing with the sudden loss of parish priests. According to the official count, Covid-19 claimed the lives of more than 230,000 Mexicans by the end of June, but even the federal government acknowledges that the real number is significantly higher.

Like the rest of the country, Mexico’s Catholic Church has been devastated by the coronavirus. According to the Catholic Multimedia Center, which publishes detailed monthly reports on the death toll among the Mexican clergy, more than 200 parish priests and at least 11 deacons have died since the pandemic began. Covid-19 has also taken Bishop José Maria de la Torre Martín of the Diocese of Aguascalientes, Auxiliary Bishop Francisco Daniel Rivera Sánchez of Mexico City and three emeritus bishops.

“We’ve lost approximately 60 priests in the archdiocese alone,” Álvaro Lozano, vicar of the Mexico City Archdiocese, said. “Under normal circumstances, 15 to 20 die each year of old age—to give you an idea of the scale.”

Although the archdiocese is not yet able to provide an exact number of staff religious and laypeople it has lost, Father Lozano said that the implications of suffering so many losses is significant. The pandemic may have brought the Catholic community of Mexico City closer, he said, but “it will take time to replace the people we’ve lost.”

The astonishing toll on Mexico’s Catholic Church occurred despite its many precautionary measures against contagion. Shortly after the true scope of the pandemic became apparent in Mexico in the spring last year, the vast majority of parishes in the hardest-hit states, Mexico City and the neighboring State of Mexico, closed down, moving the celebration of Mass and other spiritual activities online. Large-scale events like the yearly pilgrimage of Our Lady of Guadalupe were canceled.

In a country where priests are frequently targets of deadly violence, often committed by criminal gangs, the additional losses will prove hard to bear.

But for many it came too late. Along with many hundreds of parishioners, dozens of Mexico City church officials have died. In a country where priests are frequently targets of deadly violence, often committed by criminal gangs, the additional losses will prove hard to bear.

The number of Covid-19 cases and deaths in Mexico City has dropped significantly in recent months. But the fear of a new wave of infections is ever present.

“On weekdays, when we know nearly all of the people coming to Mass, we can relax the measures a little, but on Sundays, when there are a lot of people we don’t know, we still hand out [antiseptic] gel, socially distance and have to wear face masks.

Father Stan Swamy has died of Covid-19, still in the custody of the Indian government
Ricardo da Silva, S.J.

“I still visit the sick and offer funeral rites. Here in this neighborhood, the tradition is to do it in people’s homes, not funeral homes, but obviously I have to be very careful.”

Father Lira acknowledges that the work of providing comfort to families who have lost loved ones during the pandemic is difficult. “But it’s our job as the church to comfort them, even though the pain is sometimes so great we can’t find the words to do so.”

Father Lozano added that the church has also learned to cope with the circumstances by finding new ways of doing pastoral work. “We continue to take measures to protect ourselves and the parishioners and we follow the government’s guidelines, so we use masks, gel, social distancing,” he said. “But we’ve also learned to use social media and the internet to evangelize virtually. We’ve been successful in approaching people online.”