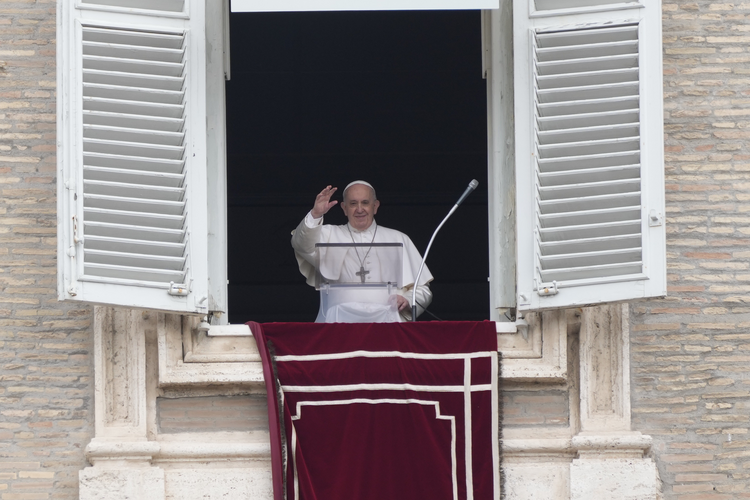 In this June 29, 2021, file photo, Pope Francis salutes from the window of his studio overlooking St. Peter's square at the Vatican, as he recites the Angelus prayer. (AP Photo/Gregorio Borgia, File)

ROME (AP) — The Vatican has detailed laws, rituals and roles to ensure the transfer of power when a pope dies or resigns. But none of them apply when he is sick or even unconscious, and there are no specific norms governing what happens when a pope becomes incapacitated.

As a result, even though Pope Francis remains hospitalized while he recovers from intestinal surgery Sunday at a Rome hospital, he is still pope and very much in charge. The Vatican said Tuesday Francis had eaten breakfast, read the newspapers and had a walk, and that his post-operative recovery was proceeding normally.

Still, his weeklong hospital stay —the first of his papacy — has sparked interest about how papal power is exercised in the Holy See, how it is transferred and under what circumstances.

Here’s how it works:

The Role of the Pope

The pope is the successor of the Apostle Peter, the head of the college of bishops, the Vicar of Christ, and the pastor of the universal Catholic Church on Earth, according to the church’s in-house canon law.

Nothing has changed in his status, role or power since he was elected the 266th pope on March 13, 2013, even while he underwent three hours of surgery Sunday to remove half of his colon.

Even though Pope Francis remains hospitalized while he recovers from intestinal surgery Sunday at a Rome hospital, he is still pope and very much in charge.

That status is by theological design.

“The pope’s authority is supreme, full and universal,” said canon lawyer Nicholas Cafardi. “So if his authority is at that level, who gets to decide that he can no longer exercise that authority? There’s nobody above him.”

Francis may be in charge, but he already delegates the day-to-day running of the Vatican and church to a team of officials who operate whether he is in the Apostolic Palace or not, and whether he is conscious or not.

Chief among them is the secretary of state, Cardinal Pietro Parolin. In a sign that Francis’ hospitalization foresaw no change to the governance of the church, Parolin wasn’t even in the Vatican during Francis’ three-hour scheduled surgery. He was in Strasbourg, France, to commemorate the 1,300th anniversary of the death of the patron saint of Alsace.

Francis may be in charge, but he already delegates the day-to-day running of the Vatican and church to a team of officials who operate whether he is conscious or not.

Other Vatican functions are proceeding normally. Its daily noon bulletin came out again Tuesday with the names of new bishops appointed by the pope in Nicaragua, Nigeria and Britain. They presumably were approved ahead of time, although Francis could sign decrees and handle other matters of importance from his hospital bed, as St. John Paul II was known to have done during his many hospitalizations.

What happens when a pope gets sick?

Canon law does have provisions for when a diocesan bishop gets sick and can’t run his diocese, but none for a pope. Canon 412 says a diocese can be declared “impeded” if its bishop — due to “captivity, banishment, exile, or incapacity” — cannot fulfill his pastoral functions. In such cases, the day-to-day running of the diocese shifts to an auxiliary bishop, a vicar general or someone else.

Even though Francis is the bishop of Rome, no explicit provision exists for the pope if he similarly becomes “impeded.” Canon 335 declares simply that when the Holy See is “vacant or entirely impeded,” nothing can be altered in the governance of the church. But it doesn’t say what it means for the Holy See to be “entirely impeded” or what provisions might come into play if it ever were.

“We just leave it up to the Holy Spirit.”

“Really, we have no rules for this,” Cafardi said. “There are no canons and there’s no separate document that says how you would determine incapacity, whether incapacity could be permanent or temporary, and even more importantly who would govern the church in that time. Nothing. Absolutely nothing. We just leave it up to the Holy Spirit.”

What about Paul VI’s letter?

In 1965, Pope Paul VI wrote letters to the dean of the College of Cardinals hypothesizing that if he were to become seriously ill, the dean and other cardinals should accept his resignation.

Paul foresaw the possibility that as popes continued to live longer, they could become incapacitated by stroke, dementia or some other long-term, progressive ailment that would make it impossible for them to do their job, and unable to freely resign.

In one letter, published in 2018, he cited an infirmity “which is presumed incurable or of long duration and which prevents us from sufficiently exercising the functions of our apostolic ministry.”

The letter was never invoked, since Paul lived another 13 years and died on the job.

But experts say Paul’s letter was unlikely to have ever been used since canon law requires a papal resignation be “freely and properly manifested” — as was the case when Pope Benedict XVI announced his resignation in 2013.

The only time papal power changes hands is when a pope dies or resigns.

The scenario Paul envisioned — laying out grounds for his resignation in advance for a time when he might not be conscious or capable — “is not valid, because for a pope to validly resign from office he has to be lucid,” said Kurt Martens, canon lawyer and professor at Catholic University of America.

What happens when a pope dies or resigns?

The only time papal power changes hands is when a pope dies or resigns. At that time a whole series of rites and rituals comes into play governing the “interregnum” — the period between the end of one pontificate and the election of a new pope.

During that period, known as the “sede vacante,” or “empty See,” the camerlengo, or chamberlain, runs the administration and finances of the Holy See. He certifies the pope’s death, seals the papal apartments and prepares for the pope’s burial before a conclave to elect a new pope. The position is currently held by Cardinal Kevin Farrell, the head of the Vatican’s laity office.

The camerlengo has no role or duties if the pope is merely sick or otherwise incapacitated.

What about Pope Benedict XVI?

Even though there is a retired pope living on the Vatican grounds, he has no formal role to play, either.

Benedict, 94, ceased being pope on Feb. 28, 2013, when he became the first pontiff in 600 years to resign. He has been living in a converted monastery in the Vatican gardens ever since.